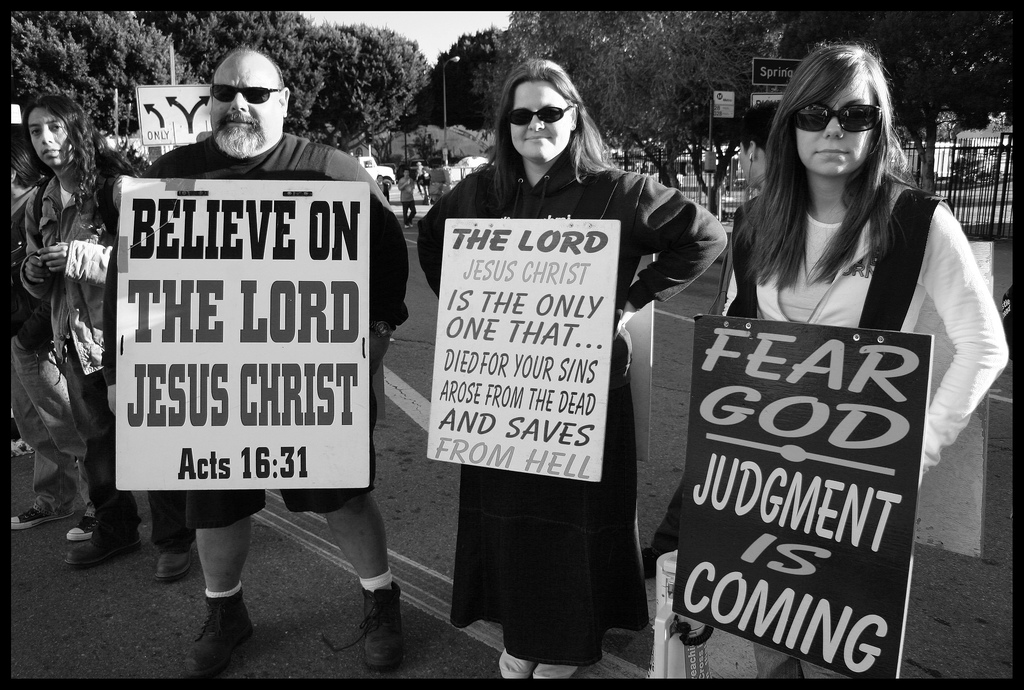 Deliver Us: In Search of the Traveler’s True Religion

I’ve had a number of conversations with Couchsurfers over the years to gauge their personal beliefs and political opinions. For some reason, I always tend to think of travelers, by and large, as liberal free thinkers.

This is hardly the case for everyone, but what is it about Christianity and other western religions that keeps me thinking it’s impossible for an educated, well-traveled individual to believe in them? My cousin, who I consider to be a reasonable man, is a priest. Even one of my friends on Matador is a self-proclaimed Christian. So why do I continue to believe that travelers will automatically tend to follow eastern religions, or none at all?

What I am? Who knows. I traveled the world, discovered the spiritual side of running, lived on a Buddhist monastery, and hiked a pilgrimage in Japan.

Am I Buddhist? Not really. I certainly find aspects of the philosophy appealing, and I have meditated on a regular basis, but I don’t agree with much of the ritual in the Theravada tradition.

Atheist? Too strong a word. Richard Dawkins and others of a similar mind show far too much certainty about the most uncertain part of our existence.

Christian? Mormon? Muslim? Don’t make me laugh. My parents were devout Presbyterians and raised me as such, but it seemed that with each passing year of my childhood, another hole appeared in my faith. As my eyes were opened to the realities of the world, religion seemed to grow more absurd. Like western religions rewarded ignorance; the more you were willing to overlook inconsistencies in the Bible, the stronger your faith was said to become. Like faith itself was giving up your humanity, your intelligence.

So am I typical of you readers out there … ? You travelers, travel writers, those comfortable enough to at least listen to a discussion on faith rather that blindly yelling opinion in an attempt to “save” others? You tell me.

Let’s look at this argument from the perspective of a virgin traveler. Someone who, if raised in the US, is most likely Christian, but not a fundamentalist. He’s 18, never left home, on a last summer trip before entering university. Very common. All his life he’s attended church with his parents as a matter of habit, never questioning it nor really going along with it. Life, as far as religion is concerned, just is. Some believe one way, others believe another way. Who’s to say which is better?

For the first time in this young man’s existence, he’s exposed to life outside his country. Maybe he goes to Thailand, where it appears the quality of life may be lower by some standards, but the state religion is focused on the power of the mind, on questioning beliefs, rather than blindly following them. Leaving a part of the universe open to mystery and interpretation. Having everything so quantifiable, as Dawkins suggests, really takes the poetry out of life. So I suppose no western religion truly fits that criteria. Just try to find something in the Bible comparable to the Buddha’s teachings ”¦ impossible. Buddhism and most eastern religions utilize the oldest tool available for study: the mind, and how best to reach its potential.

What Is the Answer?

So Buddhism is the ultimate answer? Hardly. But it certainly seems to work for Asian countries and impressionable young minds looking to travel abroad. Even Hinduism suggests the awesome power of the human mind versus the ultimate fate of a “soul”. The pursuit of such questions is inherently more valuable than the answers. Maybe there really is a human soul, something we will into existence by consciousness alone; maybe there is a kind of “God”, who snapped her fingers to create the universe; maybe this is all a dream in the mind of a really fat kid and once he wakes up, we’ll no longer exist, and he’ll have a craving for ice cream.

Many have argued that no reasonable person can honestly hold racist opinions once engaged in conversation by a member of the ethnicity they were indoctrinated to hate, because stereotypes and blind hatred can’t hold a candle to the truth.

And the truth is amazingly simple: nothing is as it seems. I believe the same case could be made for religious beliefs; no reasonable person, whether raised to be Catholic, Muslim, Jewish, Hindu, Buddhist, can maintain their faith in the face of the facts of the world:

And what of seasoned travelers? As their world views expand, so too do their beliefs? What do you think?