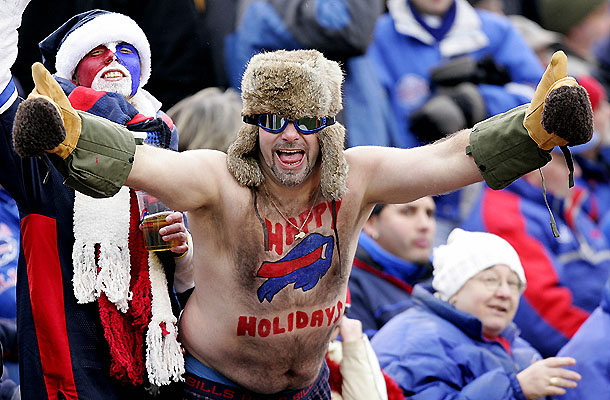 It’d been almost a decade since I last visited Buffalo, New York. I think sockhops and AOL were still cool back then. I just remember it being very gray: gray buildings, gray skies, just an overall sense of … gray.

So when we were recently invited to explore western New York, I was skeptical. I’d done that already and the thought of visiting Buffalo again — in November again — didn’t exactly blow my dress up. Fast-forward to 2014 and almost everything I remember about the city has changed. We spent three days in the city (just hours ahead of their latest biblical blizzard) and had way more fun than we ever expected.

Here are six reasons you should (re)visit Buffalo, New York …

Buffalo wings (just call them “wings” if you want any hope of blending in amongst the locals) are a must. Anchor Bar claims to be the “Home of the Original Buffalo Wings™”. They’ve even trademarked it so it must be true.

But wings are too obvious, so we wanted to dig deeper.

Turns out Buffalo has a huge Polish population and that means … great, authentic Polish food. R&L Lounge opened its doors in 1969 by owners Ronnie and Lottie Pikuzinski and they’ve hardly changed in more than 45 years.

They have no website (though there is a Facebook page that I can only imagine someone’s grandson setup for them). They’re adored by locals. And apparently their business hours are merely a suggestion, as evidenced by the fact that they weren’t open when we showed up. In the end, we were left pierogie-less. But ForgottenBuffalo.com reports that R&L is “known for their famous Polish lunches featuring homemade pierogies and golabki, they serve dinner only on Friday.”

I’ve never met Lottie and I love her already. When I picture a sweet Polish woman feeding me pierogies, this is exactly who I envision:

Another Buffalo tradition is to grab a plate of “parmed” pasta. This isn’t a high culinary experience mind you, but rather a simple plate of pasta and red sauce smothered in an ungodly amount of Parmesan cheese. We were assured there’s no better place for it than Chef’s Restaurant — a Buffalo institution. 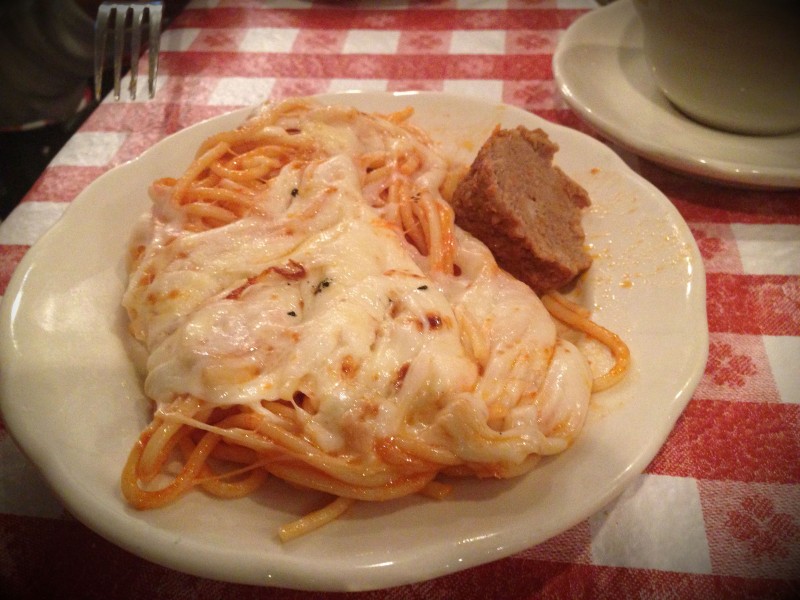 It’s a large, no-frills, open dining space with red-checkered table cloths and walls plastered with photos of celebrities holding jars of the restaurant’s famous sauce (available to-go of course). There’s never a bad time for a pound of pasta, marinara sauce, and an entire jar of parmesan cheese. It was every bit as delicious and filling as it sounds. Chef’s is a must-visit for anyone who’s carbo-loading or hates Dr. Atkins.

Whether you’re an aficionado of architecture or not, you’ve no doubt heard of Frank Lloyd Wright. America’s most well-known architect is famous for his timeless Fallingwater house and New York’s Guggenheim Museum, among many, many others.

It’s surprising to many that Wright owes much of his start to Buffalo, New York. The then-young architect brought his commercial design skill to bear on the new home of wealthy Buffalo businessman Darwin D. Martin and his family between 1903-1905. Today the home is part of the larger Martin House Complex. 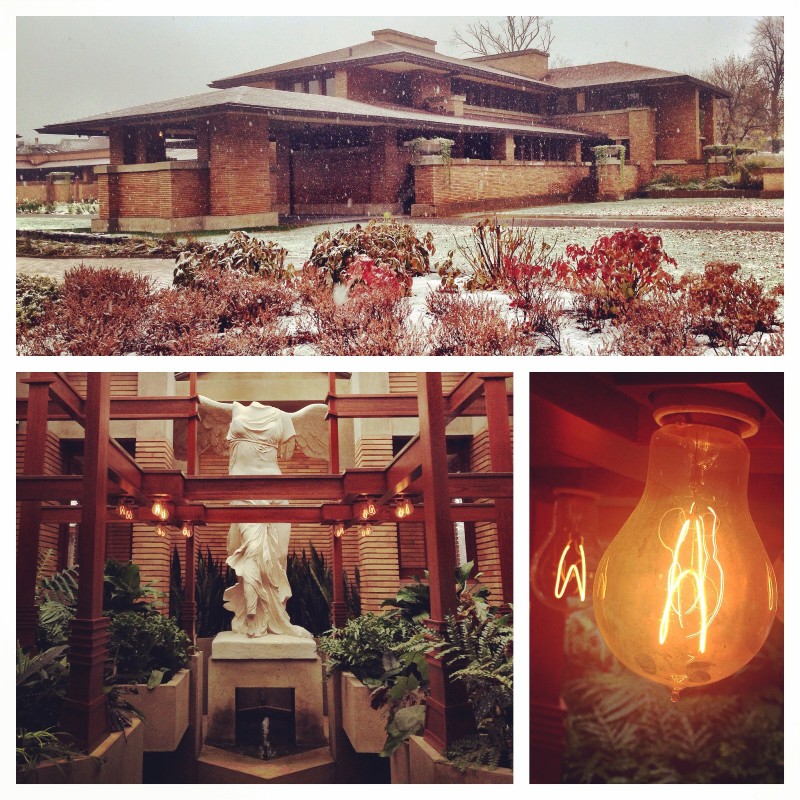 Today, both the Martin House Complex and Graycliff Estate feature a museum and walking tours to educate visitors about America’s most cherished architect. It’s a fascinating glimpse into, not only the evolution of modern architecture, but also of Buffalo’s history as a whole.

Beyond F.L. Wright’s designs, the city is also home to “one of the best collections of Art Deco architecture in the country. During the 1920s the city was riding an economic boom and it shows in the buildings. One of the best is City Hall, billed as the 2nd-tallest in the country …” (via Changes in Longitude)

It surprised us to learn that Western New York actually has its own wine trail. And we’re not talking a ragtag group of winemakers marketing crappy vino to unsuspecting tourists through a glossy brochure. It’s a legitimate AVA (American Viticultural Area) with a definable flavor and unique growing characteristics.

Buffalo Niagara is bookended by a pair of wine trails, thanks to the ideal microclimates and soil conditions that exist along Lake Erie, the Niagara Escarpment and Lake Ontario.

To the south, you’ll find the Lake Erie Wine Country, which is the largest grape growing region east of the Rockies.

To the north, it’s the Niagara Wine Trail, which has developed a reputation for producing world-class wines.

As much as I try to impress the waitstaff at Olive Garden, I’m no wine connoisseur. So I won’t pretend too much here. But Western New York’s wines have a clear, crisp minerality that isn’t found anywhere else in the United States. Because of the region’s unique and dramatic microclimate, the ice wine in particular is fantastic!

#4 … and Imbibe at Buffalo’s Gastropubs + Cocktail Lounges as Well

Buffalonians (as they’re properly known) love beer. But gone are the days when watery lagers ruled the taps (their love of Labatt aside). These days, gastropubs and brewpubs are spawning like rabbits and it’s no tough task to find a great craft pint at the neighborhood bar. 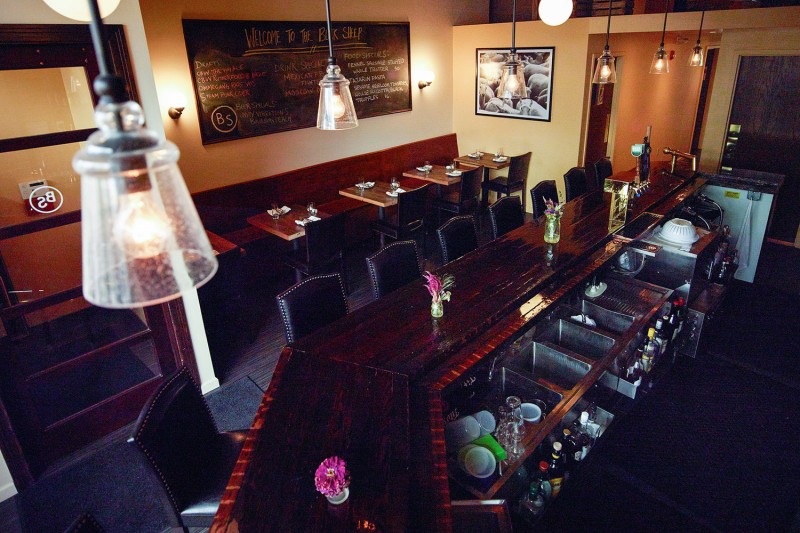 Among our favorite spots was The Black Sheep. This small gastropub offers a rotating menu of roughly a dozen small/large plates. While it’s first and foremost a great boutique eatery, they also offer a fantastic cocktail and craft beer selection as well. Bonus: Mrs Vagabondish and I agreed their sticky toffee pudding was among the best desserts we’ve ever tasted. It’s a sweet, gooey, date-based cake that blends a spiced toffee and melted whipped cream topping to form a perfect storm of flavor (yes, I really just wrote that and I’m not taking it back). 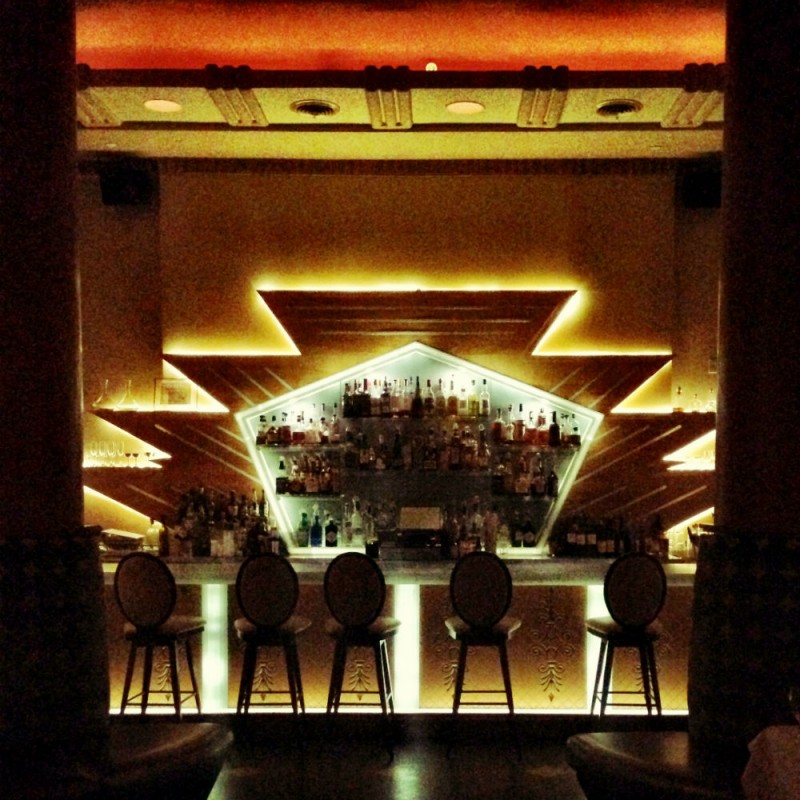 Also, in no particular order, check out:

You can learn a lot about a city through their food and wine … and beer. But you can learn even more by their love of sports. In Buffalo, their obsession with all things Bills and Sabres approaches religious status.

We could argue all day about which U.S. city has the most rabid sports fans. Wherever Buffalo falls on that list, they’re at least in the nation’s top three. There’s something about the blend of cold weather and a historically blue collar populace that just makes people nuts about sports (see also Pittsburgh). Plus:

In recent decades Buffalo based teams have become known for crushing, and sometimes controversial, defeats. “Wide Right“, “No Goal” and the Music City Miracle have come to define the suffering of Buffalo Sports fans. In February 2012 Forbes listed Buffalo #4 on its list of “Most Miserable Sports Cities.”

… so you can imagine why they’re a little loyal and more than a little touchy about their teams. 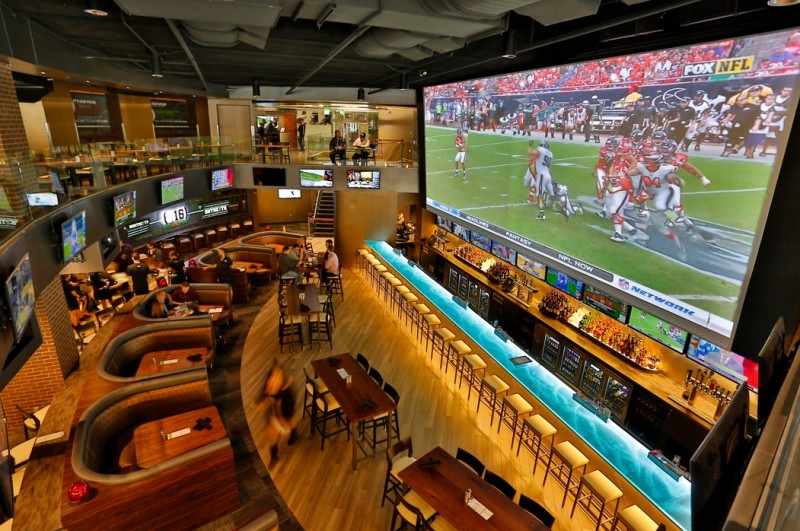 Short of experiencing a game firsthand, I highly recommend checking out 716 Food & Sport at the city’s HarborCenter. Among the downtown gastropubs and hipster coffee houses, this 13,000-square foot temple to all things sports and bar food epitomizes Buffalo’s renaissance.

The stats here are absurd by any standard: a 40-foot-long Feature Bar with a “bar top” created to replicate the ice in a hockey rink; two complementary island bars on the first floor and second floors; 360+ seats including 135 bar stools; a special VIP Area on the Upper Level; 8 unique booths with dedicated in-booth TV’s & personalized sound; and over 70 big-screen HD TV’s including TV’s embedded in the bathroom mirrors (because … why not?). Oh … and a 38-foot screen over the Main Bar that can be seen from both the first and second floor viewing areas and probably space. Sports lovers, this is your church.

This isn’t technically in Buffalo, but it’s only an hour east and well worth the drive. Perched along the Genesee River, Letchworth State Park is among the most beautiful state parks east of the Rockies. It’s often called the “Grand Canyon of the East” with good reason. It stretches across more than 14,000 acres, through which the river cascades over three major waterfalls, including New York’s highest waterfall — the 107-foot Middle Falls.

On the day we visited in November, the weather was overcast and gray with just a hint of snow fluttering across the water. Pure Western New York beauty. 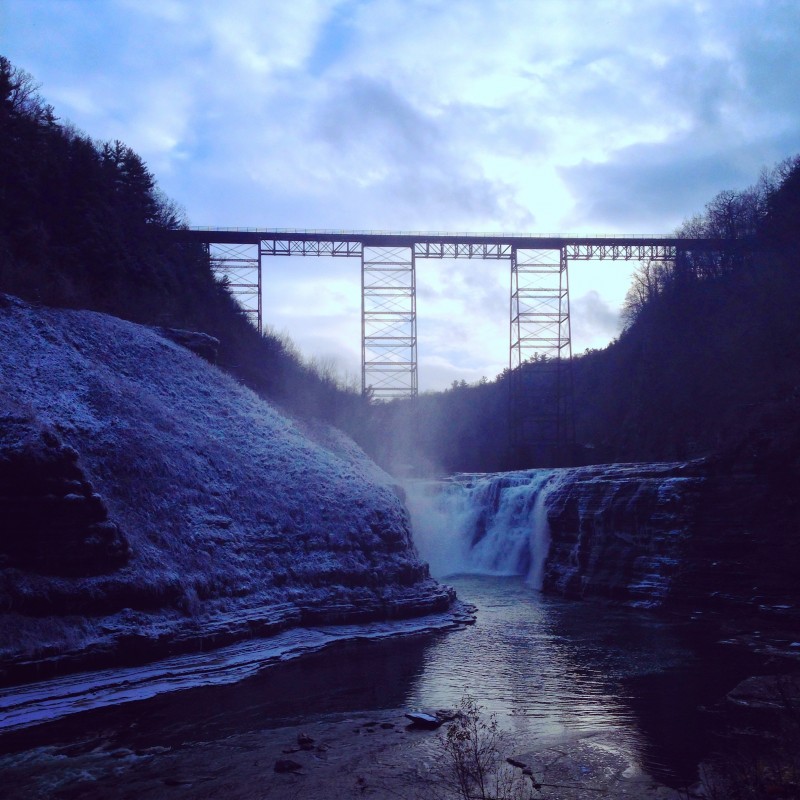 Throughout its century-long history, the park has grown to encompass every variety of recreation. Today, visitors can swim, hike, camp, fish, go canoeing and whitewater rafting, and even take a hot air balloon ride.