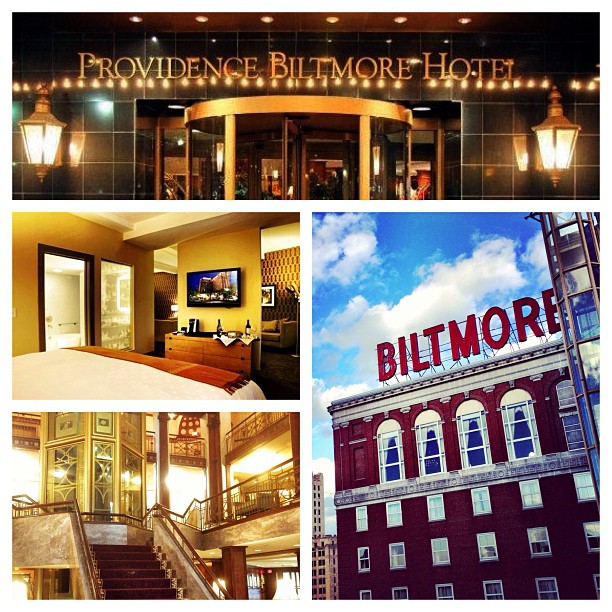 As a native Rhode Islander for more than twenty years, it’s rare that I spend the night at a local hotel. But, ask any Ocean Stater (including me) what the most quintessential and iconic downtown Providence hotel is, and the reply will be universal: The Providence Biltmore. And with good reason.

A Step Back in Time

Built in 1922, The Biltmore embodies the flashy, bygone era of The Roaring Twenties when:

… F. Scott Fitzgerald spun tales of beautiful flappers and dashing aristocrats. Crowds danced to the hot licks of cool jazz musicians like Louis Armstrong. Secret Speakeasies and backyard stills sprung up in the wake of Prohibition. Women swooned at the images of Rudolph Valentino and Douglas Fairbanks on the silver screen.

In true, decadent and glamorous fashion, the hotel opened that year to an elaborate party of more than 1,000 and the building’s exterior was adorned from top to bottom with more than 25,000 lights.

In the decades to follow, the Biltmore continued to be the hub of downtown Providence’s social scene:

… during the Big Band era of the 1930s and 40s. The Biltmore’s Garden Room swung to the sounds of such famous orchestra leaders as Benny Goodman and Jimmy Dorsey. The dance floor was once turned into an aquarium, complete with live fish, for a performance by Esther Williams. For Sonia Henie’s ice show, the floor was frozen solid.

While The Biltmore has survived hurricanes and floods and undergone several renovations in its 90+ year history – mostly to restore it to its original glory – the overall “bones” remain largely unchanged. It has even been placed on the National Preservation Register among the country’s most cherished architectural treasures.

For travelers seeking a taste of classic Rhode Island history and architecture with a healthy dose of modern amenities, The Biltmore is it.

The original V-Shaped architecture remains, assuring that every guest has an outside room with an excellent view of the city skyline.

Inside, the rooms have been recently updated with modern shower fixtures, beautiful linens, and ultra plush pillowtop king beds. The property’s guestrooms are among the largest in the state with most averaging 600 square feet or more in size. Premium King Suites and Kitchenette Suites have a wall between the bedroom and living area for maximum privacy. The latter features a microwave, sink and refrigerator to provide the comfort and convenience of home.

What’s more: there’s a Starbucks right in the hotel lobby (one of the glitziest I’ve ever sipped an Americano in) where you’ll typically find more locals than travelers. Businessmen, college kids and neighborhood bohemians pack the coffee shop daily to watch the city go by over a cup o’ joe.

The onsite spa (aptly named “The Spa at the Providence Biltmore”) is perfect for day-spa use or simply as an escape after a long day of travel. Specific services include 50- and 80-minute massage, body treatments, facials, nail care, bridal services as well as hair and makeup techniques.

Lastly, and most importantly, the hotel restaurant is a Providence icon unto itself. McCormick & Schmick’s is a staple on the Rhode Island foodie scene and has been serving quintessential New England seafood dishes for decades. The menu is printed twice daily, ensuring a constantly rotating selection of entrees; and the bar serves plenty of local draft brew. Overall the atmosphere is upscale/classy without feeling stuffy – perfect for a pre-theater drink and appetizer.

Simply put: there isn’t a better location for a city stay in Providence. The whole of the downtown area is within easy walking distance from the front door of The Biltmore, including: Trinity Repertory Theater, shopping at the Providence Place Mall, WaterFire along the river, dozens of Rhode Islands’s best restaurants, the state’s best brewpub, the RISD museum … the list goes on.

Perhaps surprisingly, The Biltmore remains one of most affordable hotels in the heart of downtown Providence. Summer rates can run around $135 (USD), while off-season stays can be had for less than $100 nightly. Check the full reservation calendar for current rates, specials and availability.