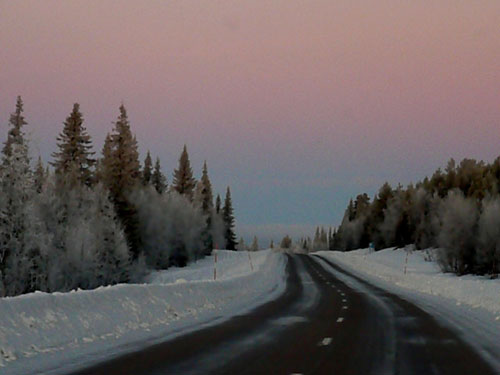 Way Past the Arctic Circle: A Journey to Sweden’s Original Ice Hotel

We came to a halt which jolted me from my sleep. The sky was hazy and cool. The snow-covered trees looked ethereal in the dark morning light. In the cold fog, we waited a few seconds until they surfaced like apparitions.

We waited until they crossed over to the other side, just as quickly as they had appeared. That was the swift evidence I needed to remind me that I was thousands of miles from home. My short nap had been a false illusion of comfort. I had awoken to the freezing Arctic Circle.

We had left LuleÃ¥ at the crack of pitch-black dawn to begin the five hour trek to Kiruna. Leaving around 6 am, all I remember was feeling groggy and being laughed at for wearing a coat that seemed more like a loose fitting blouse in the unforgiving cold Swedish winter.

After bundling up in more appropriate snow-trekking attire, we packed up our donuts and coffee, and headed on the long straight road to the top of the world. We were driving to Kiruna, 145 kilometers north of the Arctic Circle, to go spend a day at the world-famous Ice Hotel in the village of JukkasjÃ¤rvi. Kiruna is the northernmost city in Sweden, located in the Lappland province and is home to about 18,000. As of 2000, JukkasjÃ¤rvi itself had only 541 residents. JukkasjÃ¤rvi, which means Jukka’s Lake in Finnish, is best known for its Ice Hotel.

About 3.5 hours into our journey, we reached the Arctic Circle. I remember the feeling of awe standing at the Greenwich Meridian at Longitude 0Âº0’0’’ in England. For the sane man, this does not mean much, but for a geographer like me who has spent years gazing lustfully at maps in classrooms, it meant everything.

I was a long way from Africa at this point. 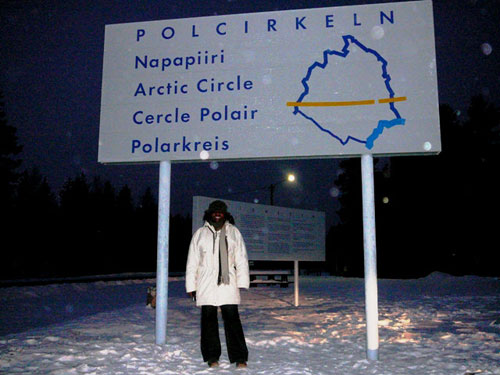 After the mandatory “I was here!” shot at the Arctic Circle, we piled right back into our Volvo and kept pressing on towards Kiruna.

The roads were desolate and it felt like we were reaching the end of the earth. The sky was becoming a series of soft pinks and cool blues like we had been dropped into an eerie watercolor painting. For a split second, I wasn’t sure if we were still alive or dead as we travelled that long road as the only car for kilometers.

We knew we had reached the Ice Hotel when we started spotting tour coaches and buses. There were people bundled up in heavy jackets and carrying cross-skiing equipment. 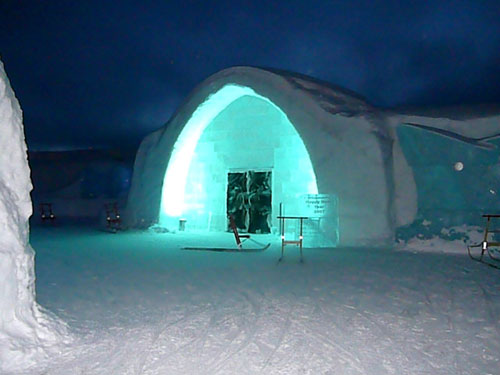 Rebuilt every year out of ice and snow from the pristine clear waters of the Torne River, the Ice Hotel is a sight to behold. Touted as the world’s first ice hotel, its halls are filled with ice exhibits, ice chandeliers, and unique rooms which are rebuilt every year. It boasts over 80 rooms and suites, a bar sponsored by Absolut Vodka, a reception, and a church. Nuptials are exchanged in the church, mostly by tourists who find its location and appeal very exotic. The day before our visit, a Scottish couple had tied the knot at the church, with the groom donning his traditional kilt.

The hotel comes to life only between December and April every year, and it costs about $196 per night to sleep in an ice cold room atop reindeer skin.

It was around 11:30 am with a low hanging sun in the stark sky and around (-) 20Ëš Celsius when we arrived at its doorsteps – a temperature up until then I had assumed was fictional and quite impossible. I was so grateful for the warmer jacket.

The rooms were simple — blocks of artistically carved ice with stacks of reindeer skin lain over. You could easily spend hours navigating the maze of amazingly designed rooms. The interior décor — shelves, stools, chandeliers, all made of ice — were quite impressive. Ice sculptures of native animals such as reindeer and moose adorned its grounds. The hotel itself was shaped like an igloo, and we joined a guided Swedish language tour of the grounds to learn more about its history and the many artists who collaborate on the hotel’s construction every year. 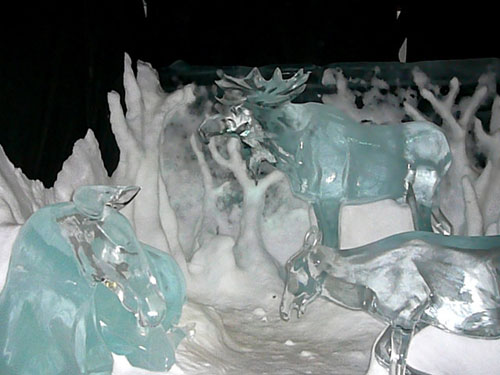 A quick stop at the Absolut Ice bar for a sip of vodka, and hunger had begun to set in. Lunch was a nice clean Scandinavian buffet – five different types of pickled fish and some salmon – at the Old Homestead Restaurant which is a brisk 800 meters from the hotel.

Despite the biting cold and early morning pilgrimage, the trip to JukkasjÃ¤rvi was well worth it. It represented a world so drastically different from my original roots that I felt so blessed to have experienced it during my lifetime. One last glance at the hotel and it was time for us to start the trek back down to LuleÃ¥.

It was already pitch-black by 3pm.

To learn more about the Ice Hotel, visit www.icehotel.com.