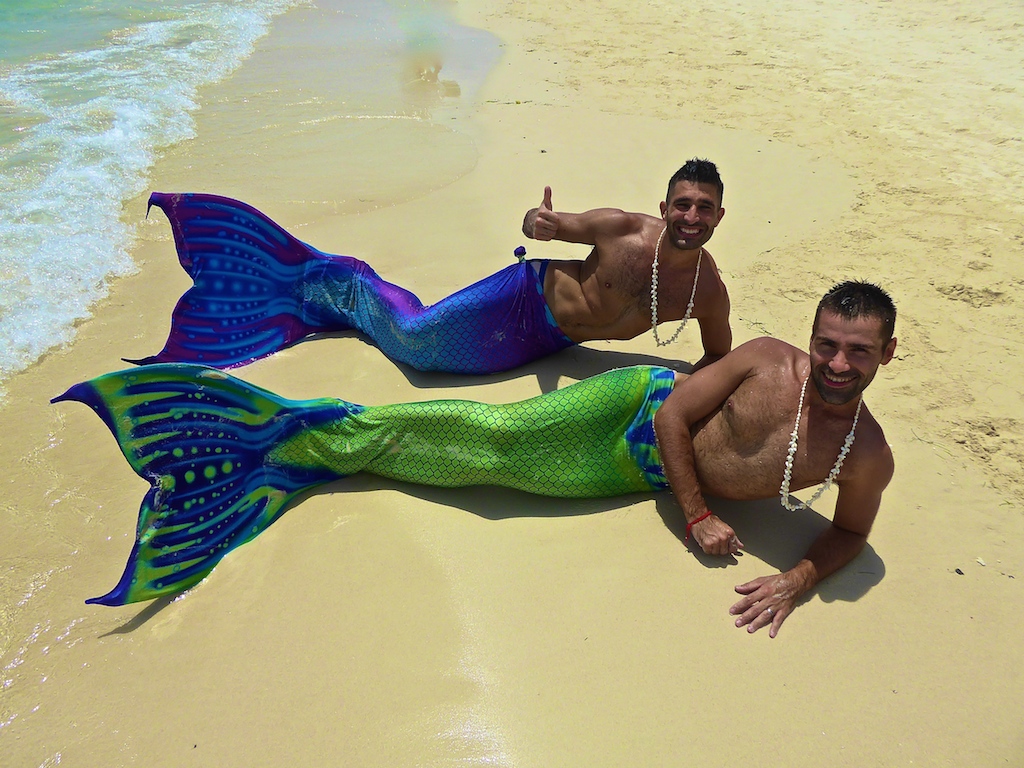 Traveling Couple: An Interview with the “Two Greedy Boys” Behind Nomadic Boys

The Nomadic Boys are self-described as “two greedy boys exploring the world”. The travel blogging couple behind the site, Stefan and Sebastien, left London in June 2014 and have been traveling the world ever since. We caught up with them recently in Malaysia to get their thoughts on blogging and traveling the world as a couple!

So guys … tell us a little about yourselves. Where did you work in your pre-travel days?

We are a gay couple, Stefan and Sebastien. We quit our jobs and London life last year to eat our way around Asia and plan to make travelling a long-term lifestyle and career.

Stefan, 32 is a former lawyer, of Greek Cypriot origin, born and raised in London. Sebastien, 33, is an IT geek, originally from France but moved to London to work in the finance industry. London is where we met. 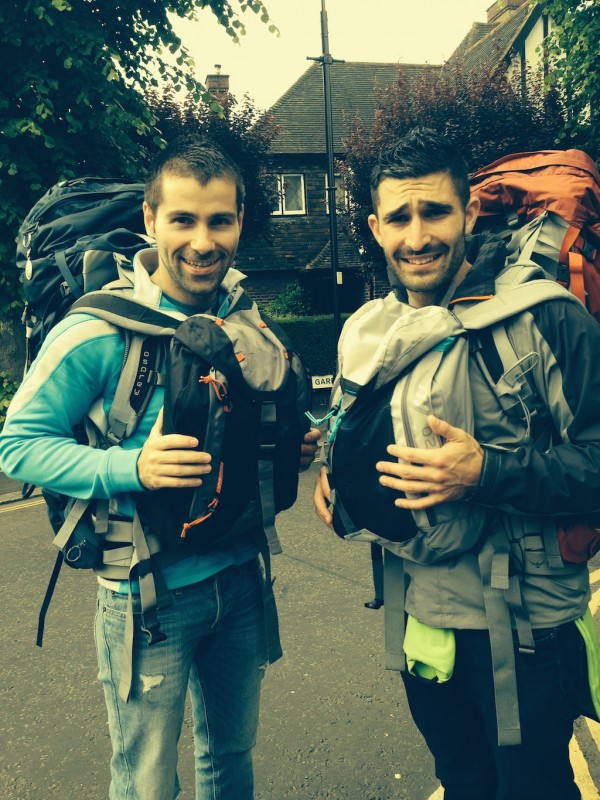 Has the travel bug always been there for you, or have you been bitten recently?

Stefan first got bitten when he was old enough to leave the nest and not travel with the family. As he is from the Greek family this happened in his early thirties. Sorry – that’s a very bad Greek joke. He was 18 when he first backpacked and started his travel experiences inter-railing around Europe with friends and later took a gap year in between university and starting law school in 2005 to volunteer and backpack his way around South America.

Sebastien always had a dream of being whisked away from his hometown in France by a Latin lover to exotic locations far, far away. He came to London initially to improve his English in 2006 and stayed for a few years. In 2009, he was so set on moving to Spain or Latin America to find said Latin lover, but he instead met Stefan. Initially, Sebastien thought Stefan could be this Latin lover, but he turned out to be a Greek (which was still ok) with a strong British accent (hmmmm …).

Sebastien nonetheless stuck with Stefan. Over the course of our 6 years relationship, we’ve done a lot of travelling throughout Europe and a few trips to Asia. A few years ago we agreed that long term travelling was a mutual long term goal, so we saved and planned for many years and in June 2014 we quit our jobs and lives in London to eat our way around Asia.

How long have you been on the road? Where are you now? And where are you going to be in the next few months?

We left London in June 2014 and entered Asia with the Trans-Siberian railway through Russia. Fifteen months on, we are in Malaysia Borneo and about to head to Indonesia for a month, then to Bangkok for a final stop, then back home to Europe for Christmas with the family.

What’s your travel style? Do you like slow travel or do you like to cover as many places as possible?

We prefer travelling slowly for two reasons. Firstly, it’s cheaper if you stay long-term. Secondly, we need time to work on the blog, which has grown exponentially over the past year.

And – it’s just too damn exhausting packing in everything that you stop appreciating it after a while. 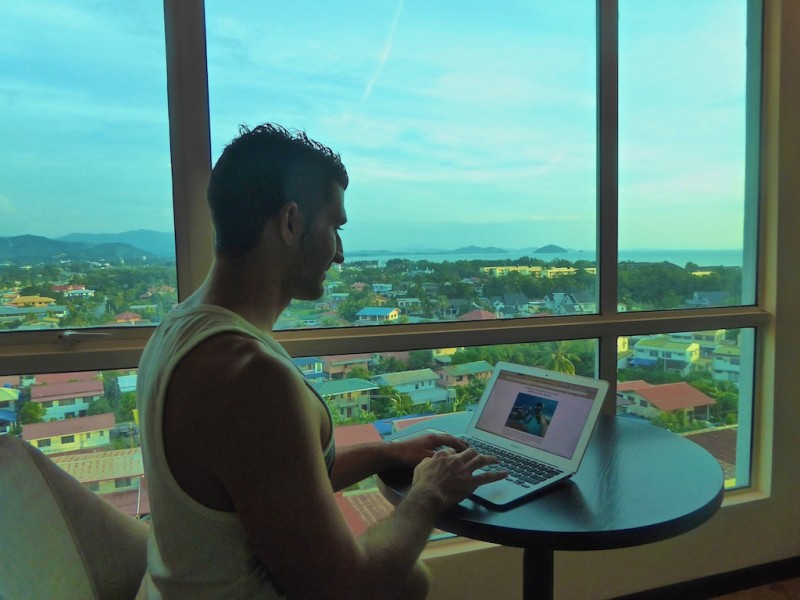 Do you work while you travel? Volunteer and earn locally, manage a digital business?

The dream is to continue travelling long term and make a career out of it. The blog has really taken off over the past year and we hope that this may one day be a source of income.

Otherwise, Sebastien is an SEO consultant and can work remotely and Stefan has always fancied teaching English as a means to continue long term travelling. Stefan also says that travelling with Sebastien is hard work because he has to fight hard to stop Sebastien stealing his food at every single meal.

Asia was up there and we’ve pretty much covered some really special places, which we want to return to, like Mongolia, Nepal, Malaysia and the Philippines.

North Korea and Bhutan are up there, but they need a chunk of money as you can only visit them via expensive tours.

Stefan’s dream is to go to Antarctica (again needs a lot of money) and Sebastien – a road trip through North America.

One dream we did accomplish on this trip was learning to dress up and swim like mermaids at Boracay in the Philippines. Now that was something else!

Do you believe that travel teaches lessons about the world, about mankind that we wouldn’t have learned otherwise? Can you tell us what your most valuable lesson has been?

There is one lesson we are still learning when it comes to eating – it’s quite a common one throughout Asia in fact – called “sharing”. At first this concept really confused and baffled us and even today we still struggle to understand it, but apparently it makes meal times more social? He he he … 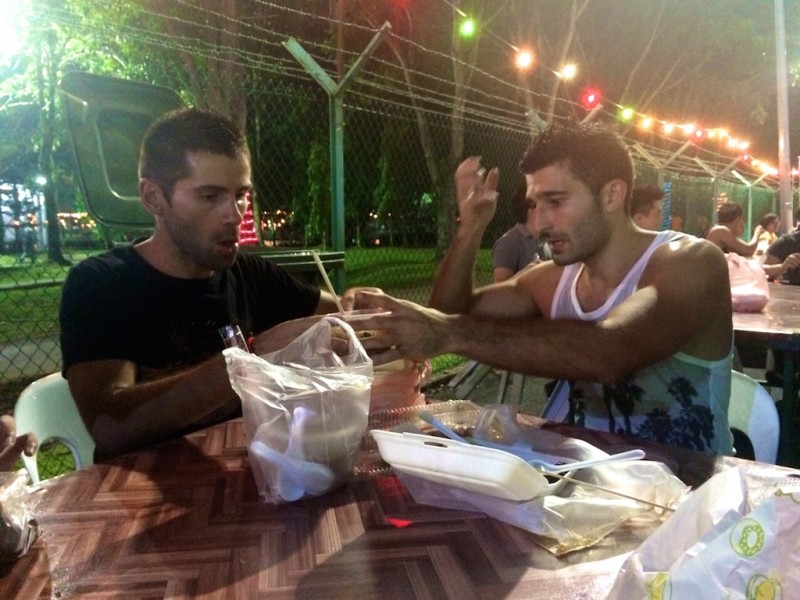 Food Fight at the Kuching Food Festival in Borneo, Malaysia

From our perspective as a gay couple travelling in a continent where gay laws are stuck in the medieval ages, we have learnt that at the end of the day most people just don’t really care what your sexuality is! Most people only want to lead their lives, go to their jobs, have enough food for their family and pay their children’s schooling. Most people are just not bothered what you do in the bedroom, despite what the media and most politicians throughout Asian governments would have you believe.

Before we set out in Russia, we were terrified after seeing the growing antipathy to the LGBT community there as reported in our Western press. Whilst, of course, this does exist and we certainly don’t go walking hand in hand in public nor wave rainbow flags around, the reality, however, is quite different. We booked twin beds at the start of our Asia adventure in Russia purely out of fear and quickly realised we were being paranoid.

A year later and travelling in countries like India, Sri Lanka, the Maldives and Malaysia (i.e. where gay is technically illegal in the eyes of the law), we don’t bat an eye with booking double beds and no one queries it or has any concern with it.

In fact, some places absolutely welcome it, as they want to tap into the “pink pound” tourist industry. For example, The Four Seasons in Langkawi (Malaysia) were keen to promote their appeal to the gay industry and invited us for a day trip there.

After you’ve been on the road for days. What’s the first thing you do when you reach civilization?

This is really sad, but for social media addict Stefan, it’s updating our FB, Insta, Twitter profiles. For Sebastien, it’s shopping. He loves to update his Clarins moisturiser collection.

Some days, shit goes all wrong. What is your calm-down mantra on those days? Do you have a ritual?

Yes – we head out to the local market and eat lots of street food. Cooking also helps and then eating afterwards seems to soothe things nicely.

Any arguments or tantrums arise when either and/or both of us are hungry and/or tired. We’ve learnt to deal with each other’s mood swings when fatigue or hunger sets in.

Keeping fit is also a great stress reliever. We try hard to maintain a body weight exercise routine to keep fit and where possible use public swimming pools, go for runs, and join local gyms. It’s incredible the difference exercise makes when you’re feeling stressed or just feed up.

Since this is a couples-travel series, how do you manage alone time? Do you find you need it?

Alone time is important for everyone, most of all for couples.

Alone time is important for everyone, most of all for couples. Back home, we’d leave each other in the morning, go to work and reunite later in the evening. Now, we’re constantly with each other. But this has made us a lot closer and we’ve learnt to manage our tantrums when they happen.

We talk about travelling separately at times, especially after seeing how other couples struggle, but (and sorry to sound so cheesy) we just can’t stand the thought of being apart and travelling without the other.

During the days when we’re working on the blog, we each do our own individual things for it – Stefan does the photos, content and social media while Sebastien is behind the IT, videos, and planning for our travels. So this means we maintain a kind of healthy “separation”. Of course, dinner time then kicks in and all hell breaks loose …

We are both very excited about returning to Europe in November (Stefan to London, Sebastien to Lyon) as we will see our friends and family again after a long break. But at the same time, we are nervous about not seeing each other during this period of several months. 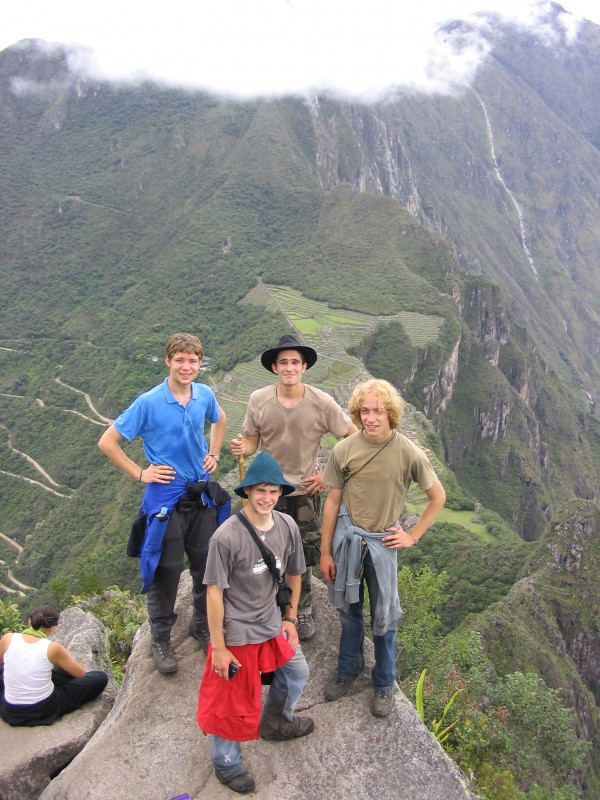 What has travelling together taught you about yourselves as a couple?

Travelling has brought us closer together and taught us how to manage the other’s mood swings, particularly when fatigue and/or hunger sets in.

What websites/social media platforms do you use most often to research/plan your travel?

Tripadvisor has become the new Bible for us and we swear by it. We love Facebook, Instagram and Twitter, but they are more social platforms rather than tools for planning.

What do you miss most about home, apart from friends and family?

For Stefan, it’s his bike (called Trek-inda) and cycling through London. Sebastien is French, so naturally his main gripe about travelling through Asia is the lack of cheese and wine.

What amazing food have you discovered on your travel? What food do you miss?

This trip has been about food and boy have we found loads of it. Asia is the best for it. Sri Lanka is incredible because they make a curry out of anything – like jack fruit, garlic, pineapple. Nepal dal bhats are delicious and always different. Sichuan food from central China is wow — spicy, but wow. Malaysia is a foodie’s wet dream due to the large variety available. And of course Thailand and Vietnam cuisines are world famous for a reason. 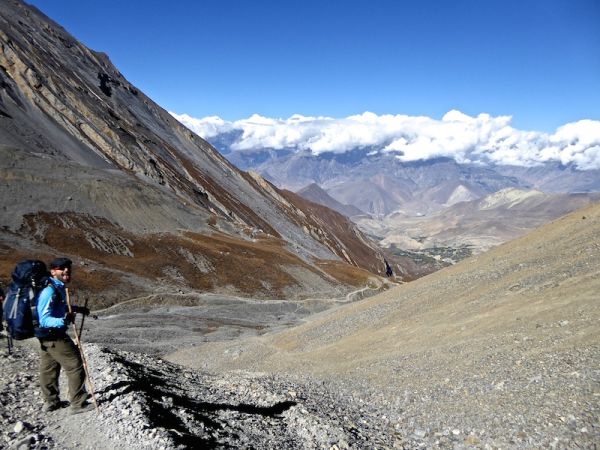 Sebastien on Annapurna Trek in Nepal

Tell us about the best moment so far? When have you stood in awe and thought, ‘This is my moment forever’?

For Sebastien, it was waking up at 5,000 metres high at the Annapurna High Camp at 3 am due to breathing difficulties due to the altitude. He went outside and was just alone with the mountain peaks around him and the clear (very cold) night sky. There, he felt that sense of wow as he breathed in the air and slowly overcame his altitude sickness.

For Stefan, it was in the Gobi Dessert in Mongolia, staying with one of the nomadic families and watching a fiddle player put a camel to sleep (the sound soothes them and makes them cry) all to a stunning sunset backdrop. That was an unforgettable moment.

Do you talk to other travellers much? Has someone said something insightful that you’ll remember?

Of course all the time, both in person and via social media. We met Dani of Globetrotter Girls in Bangkok who was probably the most influential we’ve met in person. She inspired us to take our blog to the next level, to use the gay following we’ve developed and grow it further. It has really changed our travelling experience and now we’re getting invited as media to cover events like the Rainforest World Music Festival in Kuching or to stay in plush places like Mandala Spa in Boracay who want to broaden their reach to the gay community.