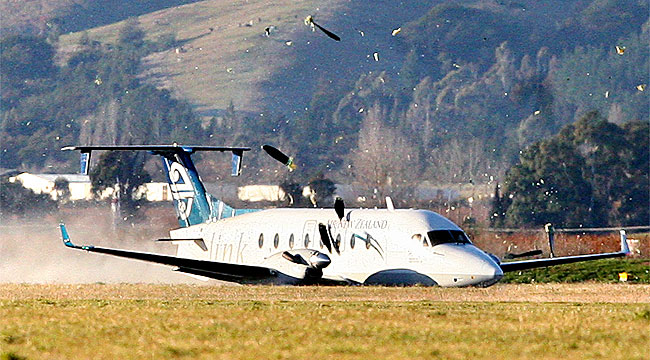 News You Might Have Missed: Incredible Plane Crash Landing

According to Stuff New Zealand:

The Air New Zealand Beech aircraft, with 15 passengers and two crew aboard, had tried to land at Wellington when the crew found a problem with its landing gear.

The flight from Timaru to Wellington was diverted to Blenheim after the fault was detected.

Fire engines, ambulances, police and other support staff rushed to the scene under a full emergency alert as the plane circled above Woodbourne for about half an hour, preparing for a crash landing.

Just after 9am, the Beech 1900D plane came in low, skidded along the grass and then came to a halt on the runway to the relieved applause of emergency crews and airport staff.

It’s amazing for a variety of reasons. Due to the pilot’s skill, remarkably no one was even injured, let alone killed.

Plus: how lucky is the photographer that he happened to be in the right place at the right time to capture this amazing shot?