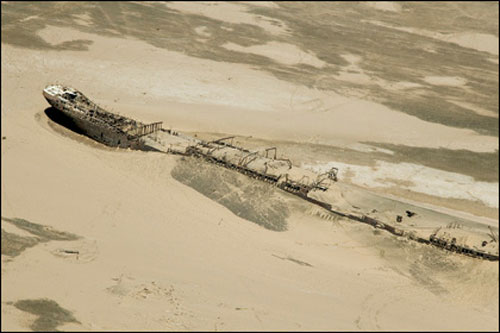 Local bushmen call it, ”˜The Land God Made in Anger.’

You could land on Namibia’s Skeleton Coast – but you couldn’t leave it. Sailors would be pushed ashore in heavy surf – sometimes in dense ocean fog, to boot – and beach themselves. The next morning, they would realize that they were surrounded, by nothing but a hundred miles of the world’s harshest desert.

One WWII cargo ship, the MV Dunedin Star, crash-landed in 1942 – as did every attempt at rescue. One rescue tug smashed on the rocks, drowning its crew. A bomber, dropping supplies to the survivors, crashed into the ocean. But those pilots actually made it ashore, even managing to join up with the survivors of the Star. The entire ragged convoy reached Namibia’s capital city, Windhoek, one month later.

These days, the Skeleton Coast is a national park. Over a thousand ships are still rusting in the dunes.