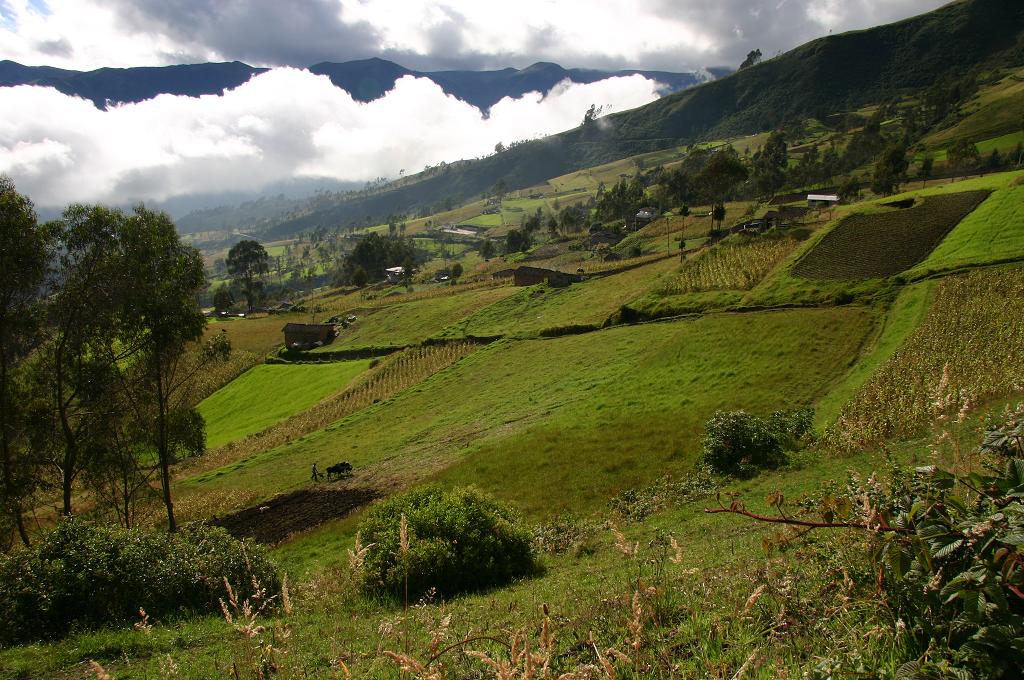 Two Months at the Middle: Looking for Ecuador on the Quilotoa Loop

The fun of the weekly market at SaquisilÃ­ began for me around 4:30 AM when a baby sheep fell off the roof of the bus. It dangled, hooves desperately seeking purchase on the smooth glass of my window.

I’d watched it (and eleven others) being hauled up, baaaaaing all the way, an hour before, during one of the bus’ frequent stops along the rough mountain pass between IsinlivÃ­ and SaquisilÃ­, in the central Ecuadorian highlands. I elbowed my seat partner to wake her up, pointing insistently out the window. 4:30 in the morning is too early for me to figure out how to say, “a sheep fell off the roof and is being strangled!” in Spanish. My seat partner shouted to the driver, we stopped, and the lamb was rescued. Susan, savior of the lambs!

I’d been in South America for five months before I finally found my way to the middle of the earth. I spent three months hiking in Chile, and two falling in love with the indigenous culture in Peru. Now, Ecuador. Alison, my younger sister, had been studying in Quito, Ecuador’s capital city, since February as part of a university exchange program. It was now June. I’d made it just in time to help her enjoy her last month abroad before she had to return home.

Alison was my city guide, teaching me to use the public transit system and orienting me so I could play tourist while she attended classes. I dutifully straddled the equatorial line at “La Mitad del Mundo” (Spanish for “The Middle of the Earth”), spent hours in the Museo de GuyasmÃ­n, Ecuador’s most famous artist, and climbed Rucu Pinchincha, one of the seven volcanoes visible from my sister’s roof. 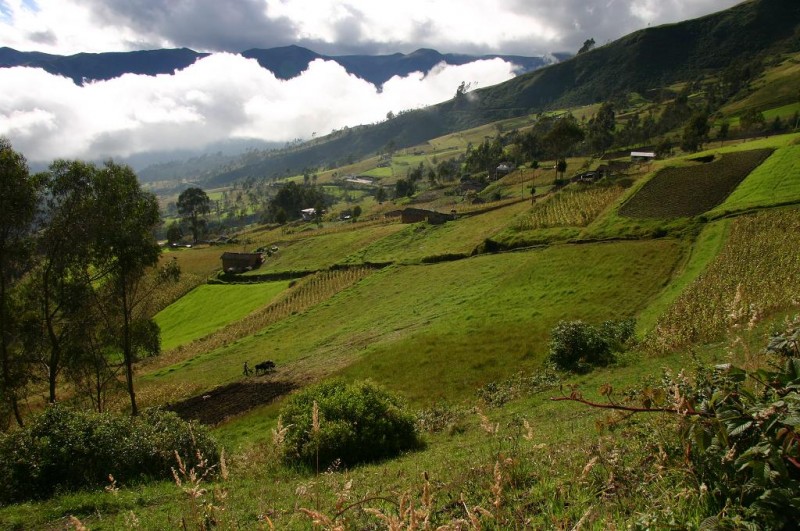 One weekend we traveled together to the famous (and touristy) artisan market at Otavalo, and she brought me to La Esperanza, a tiny mountain town where an afternoon fog drifted between the eucalyptus trees and the cobblestone streets. Another afternoon we climbed to the top of the tower in the city’s basilica. The stress of finals and a busy university schedule limited our excursions, but I was happy just to be there, to experience a bit of Ecuador at my sister’s side.

When Alison left the country to start a summer job in California, I moved south into the Andes. She was excited about her new job, and I was glad to no longer have a reason to stay in the city. The countryside and the mountains are more my style.

For a week or so I tramped around the central highlands south of Quito. I summited El CorazÃ³n (4790m) and hitchhiked into the Parque Nacional de Cotopaxi and slept in the refugio (4800m) on the edge of the volcano’s glaciated cap (5897m — Ecuador’s 2nd highest). On the mountaintops, as in the city, Ecuadorian culture was elusive, distant.

I missed the closeness to the people I’d felt in Peru. Compared to the other countries I’d visited in South America, Ecuador is much smaller, and more crowded. Its population density of 48 inhabitants per square mile is one of the highest in South America.

The hills are patchwork quilts of farmlands, and the predominately cement construction lends an unfinished look to the countryside. The gray walls matched the perpetually gray skies: July in the highlands means rain. As I moved south from the capital and hiked down out of the alpine region, however, the weather began to clear, and the country gradually opened up to me.

I learned a few words of the indigenous language, Quichua, and caught rides with local families. Sebastien, a Frenchman I’d met in Quito, caught up with me in Latacunga, and together we plotted a six-day circuit through several small towns in the western Andean foothills. Known in guidebooks as the Quilotoa Loop, here, more than anywhere else, I felt like I was finally experiencing Ecuador. 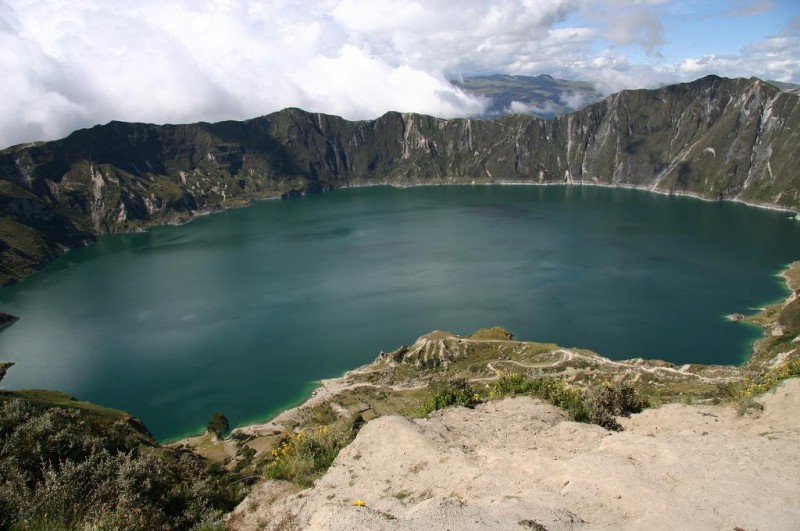 Laguna Quilotoa, a massive emerald lake inside the crater of an extinct volcano, was our first stop. It is an enormous tourist attraction, and the Quichua communities that dot the rim of the crater have learned to do business with the busloads of Europeans and Ecuadorians who pass through daily. They offer rides into the crater on the backs of mules, present demonstrations of traditional dances, sell artisan wares and other souvenirs, and serve meals in small comedors along the edge of the crater. Sebastien and I, interested in a deeper experience, spent the night inside the crater, on the beach, in the rustic but comfortable cabaÃ±a managed by local Quichua families. Incredibly, we were the only guests.

As the tour buses belched and groaned on their way back to Quito, Sebastien and I dipped the oars of a rented kayak into the mineral-tinted water, chasing scraps of mist across the still lake. That night, Janeth, Ivan, and Juan Carlos, three Quichua children from the community atop the rim, prepared our dinner and sat with us while we ate. Completely isolated, 400m below the village, the five of us huddled around a candle on the table. We traded words in English and Quichua, giggling together until the Milky Way brightened overhead and the green water glowed. 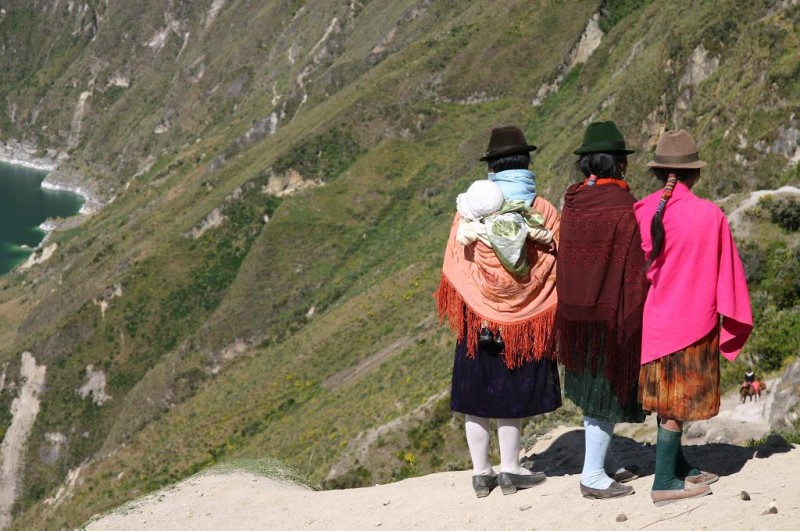 Quichua Women: Standing at the rim of the crater in typical, colorful clothing © Susan Munroe

From Quilotoa, Seb and I continued our circuit on foot, crossing a massive ravine, covering some of the distance between towns on the back of trucks or on buses. Between ChucchilÃ¡n and Sigchos, we caught a lift with the daily milk truck — a pickup truck with high metal railings around the bed and two blue plastic milk barrels strapped behind the cab. Seb and I passed our backpacks up to the other passengers, planted our feet, and we were off. A deaf man in gumboots doled out liters of the steaming fresh milk to the people along the road, and likewise accepted it in bucketfuls from the farmers and kids who waited in front of their houses. We passengers balanced in the back, bending our knees in tune to the potholes, humps and dips in the muddy road that wound along the edge of the ravine.

The market at SaquisilÃ­, the one that began with a bang, or rather the clatter of hooves on the roof, was the final highlight of our circuit. Unlike the market at Otavalo, which primarily caters to tourists and consists of textiles, pottery, jewelry and other souvenir stands, SaquisilÃ­ is an indigenous market, the social and economic hub of the central highlands. One of the largest and most important indigenous markets in the region, SaquisilÃ­ is open for business every Thursday morning, early. 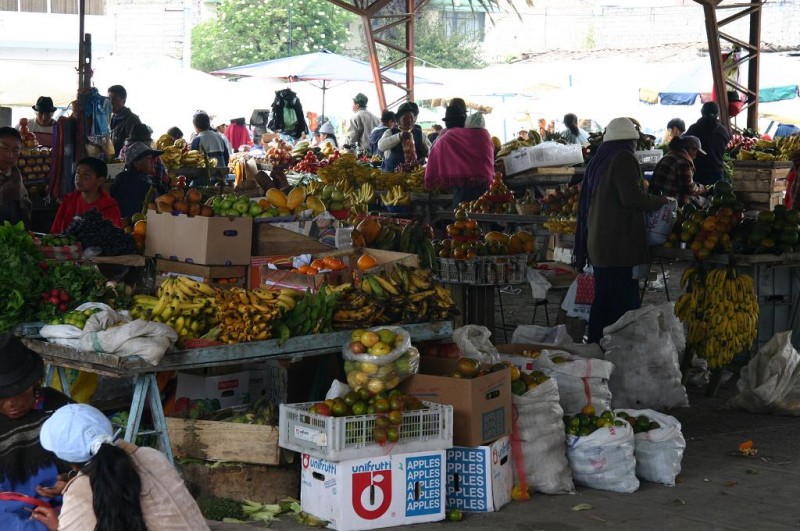 Students of Andean economics would do well to start their research here, as well as travelers interested in observing a tradition largely unchanged by globalization. Sebastien and I wandered through the animal market, watching the interactions, the bartering, the posturing, and the exchanging of wads of greenbacks for the tethered, terrified sheep, goats, cows, llamas, pigs and their young. Cuys (guinea pigs) and chickens chirped in net bags on the ground and herbs and grasses lay in huge piled hedges to be navigated.

The rest of the market spread across four different plazas and spilled over into the streets and alleyways. Under tents and behind booths, men, women, and children hawked their wares. Fresh butchered meat, health drinks, veggies, fruits, fried fish. Grains and pastas in great sacks, spices in colorful piles. Enormous cauldrons of soup and rice and boiled chickens. Utensils for the kitchen, the office, the car, the bathroom; things for cleaning, locking, organizing, decorating, chopping, storing, and hauling. Shoes, clothes, jewelry in piles, batteries and pens held out between arms draped with shoelaces and ribbons. Pickpockets and shoeshine boys and beggars plied the crowd. Uniformed ice cream salesmen raised their voices to compete with the aproned “gelatina” ladies. And everywhere, the crowd of buyers, indigenous and modern, the purposeful and the gawkers, dodged, ducked and wove, mingling in a tapestry of culture and commerce.

I smiled while I bartered with the merchants, shopping for fruit and scarves. Not blending in, but merging, participating in and contributing to the economic flow of the market, I was gratified to be a part of the action, and satisfied that I was beginning to close the distance between myself and the culture that had seemed so intangible.