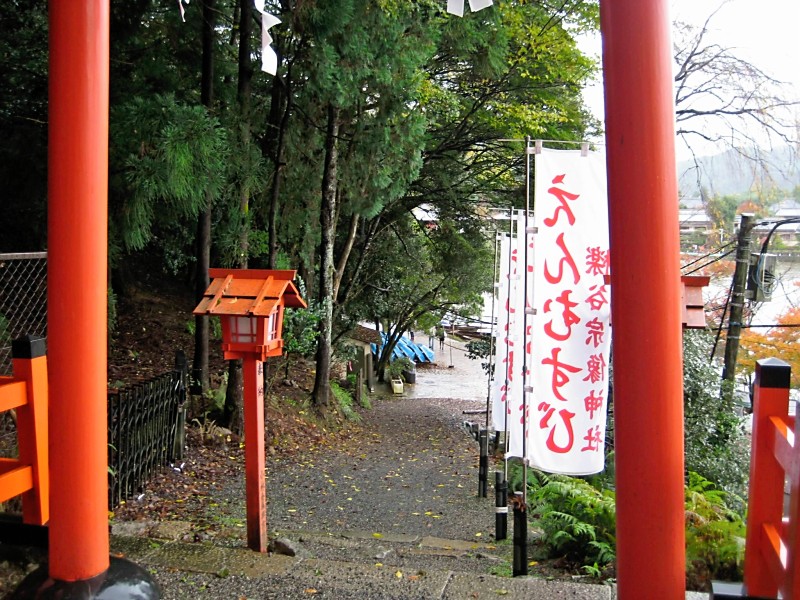 All around us, the forest breathed. Raindrops plonked against leaves. Neon-green moss coated the stones below my feet. For the first time in five days of Kyoto sightseeing, my two friends and I were alone: Just us, the trees, the mountain”¦ and the monkeys.

Maybe we should have noticed the lack of other visitors at Arashiyama Monkey Park. Maybe we should have listened to the woman behind the glass window of the ticket booth, who politely advised us to “please use caution.” Even the weather that day seemed like a bad omen: Cold rain spattered down from an iron-gray sky, wrapping the mountain in sheets of fog.

We’d come because our new friend Tetsuya””co-owner of Kyoto’s only Red Sox-themed bar””had recommended Arashiyama, in western Kyoto, as the place to see the peak November foliage. Our guidebook described ancient shrines; rides in historic wooden boats; and Togetsu-kyo, “crossing moon bridge,” famous for its views of maples and cherry trees.

Meanwhile, our city map marked Arashiyama with a cartoon of a smiling monkey. “I wonder if there’s a zoo there, too,” mused my friend Jess.

Once we got to Arashiyama, we’d crossed Togetsu-kyo behind a crowd of uniformed schoolkids, their translucent umbrellas bobbing like jellyfish in the mist. The swollen Hozu River rushed by below, its banks lined with red maples and gold gingko trees””a sight almost beautiful enough to make me forget that Togetsu-kyo might be the wettest, windiest spot in Japan. Nearby, the historic wooden boats bumped sadly against the riverbank. 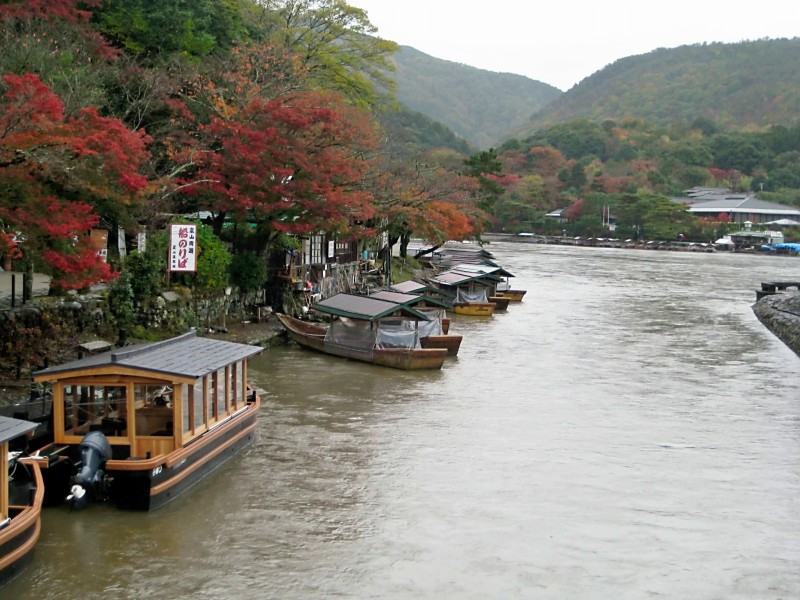 Then we saw it: a sign with an arrow pointing up, a twisting trail, and another whimsical cartoon monkey. Maybe some kind of monkey shrine, I thought; I’d heard of sacred deer, so why not monkeys, too?

Ten minutes later, we found ourselves in Arashiyama Monkey Park””only it wasn’t a park so much as a trail of steep, rocky steps carved right into the mountainside. The guardrail-less, rain-slick path would have meant a lawsuit waiting to happen in the US, but here the warnings focused on other concerns.

Everywhere we looked, bilingual signs advised us of proper behavior. “Don’t touch the monkeys.” “Don’t feed the monkeys.” “Don’t take a picture on the way.” “Don’t show food to the monkeys.” “Don’t stare at the monkeys in the eye [sic].” This last point came across in pictures, too: A boy and a cartoon monkey strolled past each other on the path, smiling blithely as they gazed in opposite directions. On another sign, a pop-eyed monkey brandished a fist, its pupils shrunk to tiny dots of rage. 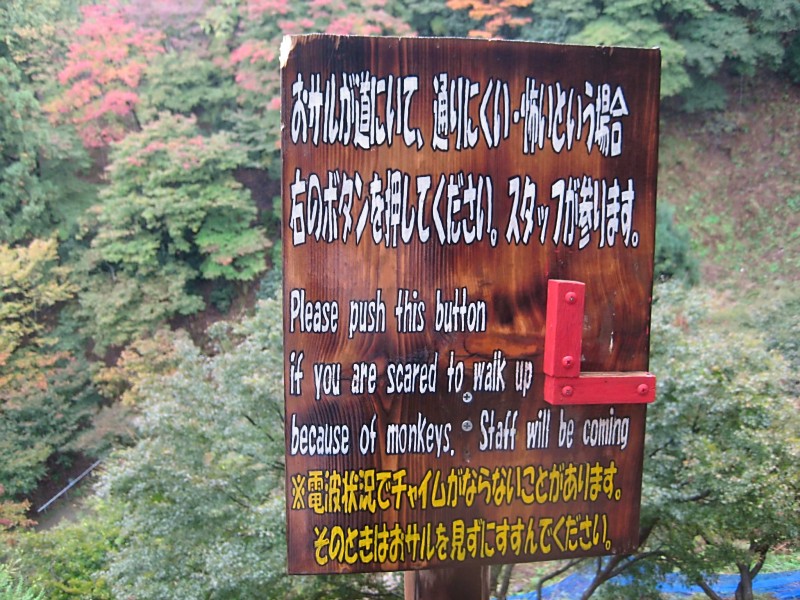 I didn’t pay close attention, though, until the path cut right through the middle of an open metal gate. A chain-link fence glittered in the trees. And it occurred to me, belatedly, that this wasn’t a zoo in the conventional sense, nor was it a shrine to some monkey-friendly deity.

This was the monkeys’ forest, and we were in the cage.

As we climbed higher, we came out of the trees and onto the open mountainside. The trail zigzagged ahead, cutting steeply around a series of bright-colored plastic benches. I looked up and spotted something moving: dozens of fuzzy gray shapes, slouching menacingly through the wet grass …

“Don’t look them in the eye!” yelled Jess, shielding her eyes with her hand like someone struck blind by the sun. I inched along, fixing my gaze on the wet stones below.

Then Jess’ husband Mark–who’d taken the lead in our expedition””came to a sudden halt.

I peeked around the next corner and glimpsed two monkeys huddled close together on the narrow path.

“What are they doing there in the middle of the trail?” I asked Mark.

“One of them looked right at me, so I turned around,” he explained with a slight shudder. “I don’t think they want to be disturbed.”

A brief, tense debate followed. According to the signs, we were almost at the “resting place” at the summit of the park. But to get there, we’d have to interrupt these particular monkeys during a very private moment””and that meant eye contact, and all the potential consequences.

Finally, I cast the tie-breaking vote: go back down.

It was the right choice, yet a sense of disappointment still hung in the air, thin and clammy as the mountain mist. I hurried back down the trail, annoyed about all the time we’d wasted.

But then, as the trees closed back over my head, I started to notice my surroundings. Swordlike yellow leaves twirled down into my path. A scent of clean, wet wood perfumed the air. A half-hidden waterfall twined through the trees, whispering down a channel as worn and gray as the mountain itself.

I slowed my steps then, wondering why I was in such a hurry. After all, there was plenty of time left in the day. 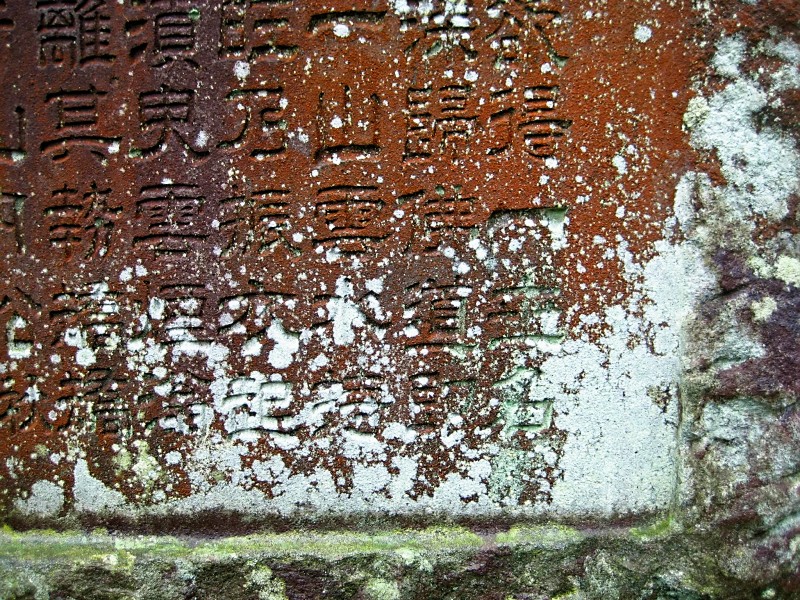 There would be time for me walk in the 800-year-old Zen gardens of Tenryu-ji Temple, where statues grimace and rocks ripple like water. To breathe the hot, savory steam from powan””starchy stuffed rice buns””purchased at the snack bar across the river. To approach ancient shrines, where I’d toss a coin into a wooden offering box; grasp a heavy, frayed rope; and ring a muffled, deep-clanging bell to get the gods’ attention.

As I walked, I thought of the night before at our ryokan in central Kyoto. I’d drawn back the sliding window screen to let in the cold night air from the garden; to keep warm, I’d huddled under the crisp, heavy white blanket of my futon, listening to the rain through the paper walls.

Maybe that’s why a strange serenity came over me as I neared the end of the trail””so much so that I smiled and nodded at a crowd of middle-aged German tourists puffing their way up the slope. With safety in numbers, I hoped they’d have better luck in the park than we did.

But, monkeys or no monkeys, I was exactly where I wanted to be.