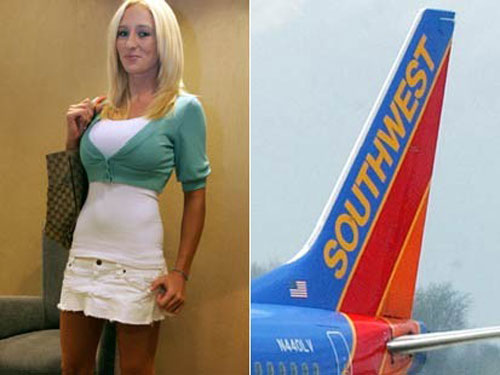 Southwest Passenger Asked to Change Outfit Bares All for Playboy

If the prim Southwest Airlines employee who told Kyla Ebbert to adjust her revealing outfit before getting on board meant for the 23 year old college student to be mortified enough to cover up in the future, it hasn’t worked. Ebbert is once again in the news, and this time for wearing even less than she did when she was asked to step off the flight this summer.

Kyla is featured nude in the latest issue of Playboy in a spread entitled “Legs in the Air.” Early this summer, she was asked to step off a Southwest Airlines plane after crew decided her mini skirt, tank top and sweater combo was too “revealing” and might offend passengers. She was allowed back on the flight only after changing the offensive outfit.

A furious Kyla took her story on the road, appearing on the “Today” show and “The Dr. Phil Show” dressed in the contentious ensemble. Meanwhile Southwest Airlines, not to be left out of all the free press the scandal was generating promoted a fare sale in honor of the mini skirt. This seems to have infuriated the college student even further who says the airline didn’t ask her permission before they used her name in an ad campaign. Although whether she was upset she was being parodied, or was just cut up for not receiving compensation in return for her 15 minutes of fame is moot.

Ebbert who has worked at a San Diego Hooters, doesn’t specify how much she was paid for baring all for Playboy, but admits it was less than six figures. Her newfound notoriety doesn’t seem to have dampened her ambitions of becoming an attorney. To quote, “I don’t see why it would affect a professional position.” No, of course not.