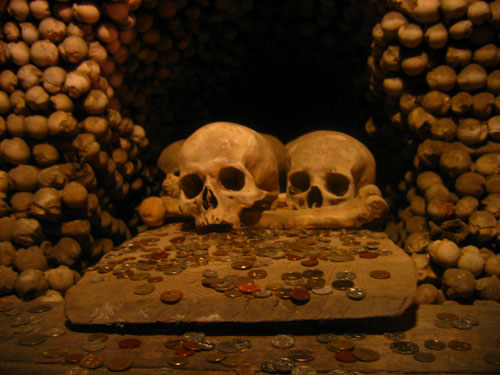 The day had already passed its prime, yet we decided to set out for a destination none of us wanted to miss. Although the dreary cloud cover and apathetic mist that once set the mood for the bleak communist city of Prague was beginning to roll in despite the 1989 revolution, we headed east. There was no doubt where we were headed and the excitement seemed inhumane but natural. As night over took us and our headlights seemed to suspend the moisture in the air we came closer and closer to Prague’s Sedlec Ossuary or, as we all knew it, “the bone church”.

Passing through the medieval town of Kutna Hora the anticipation mounted. We knew we had set out too late and the forty minute drive had taken us over an hour on the poorly paved roads we ignorantly had driven. A simple train ride and a short walk from Prague’s train station, Hlavni Nadrazi would save gas and effort.

As we entered the city, a brisk November chill had driven the town-folk indoors. Arcane bulbs in the Czech street lamps bathed the pavement in an eerie yellow glow. Still we made our way around a small unkempt roundabout and parked directly across from our destination. 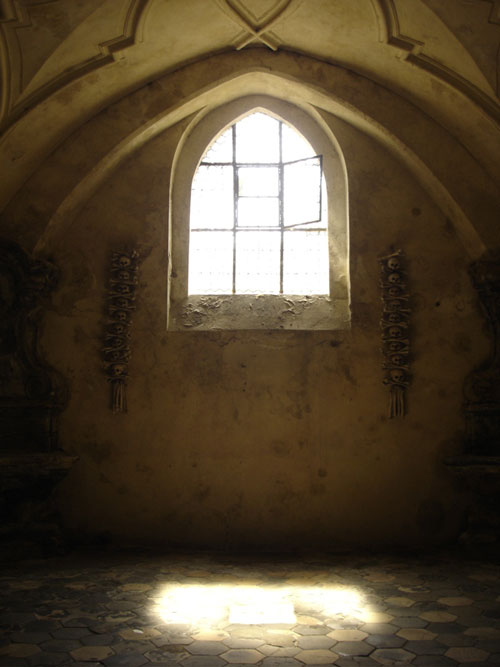 The ossuary, built in 1400, was dark save a single light shinning through the pointed arched window above a wooden door. Hurriedly, we approached the entrance only to find an older man clad in a black wool coat closing the door and turning the cast iron key that must have been in use for at least half as many decades as he had worked there.

With the full moon now hanging in the sky and shinning through the sluggish clouds the church’s two spires held the skull and crossbones insignia silhouetted in the night. We understood the ossuary had already been closed for the night but we pleaded with sincerity and ardor to be let in. Between us we could fumble through German, French and of course English but without Czech or Russian our communication with the attendant was difficult. Able to convey our desire to be let in the elderly caretaker turned the key once more and with a slipping click of the latch the door was pushed open.

Inside the lighting flashed on with a flick of a couple switches. Before us stood a wide staircase leading down into the lower level of the ossuary just past the small attendant’s desk where we paid the requisite 50 CZK (about 3 US dollars at the time).

On the wall hung a single, vast row of human skulls appearing like an impressionist’s version of an elongated spinal column.

On the wall hung a single, vast row of human skulls appearing like an impressionist’s version of an elongated spinal column; bones in every form were the theme. Large vase-like structures made entirely of human bones cowered in shallow recesses in the wall and above our heads an array of various osseous matter hung purposefully arranged on stone walls and ceilings matching the bleached hue of bone. 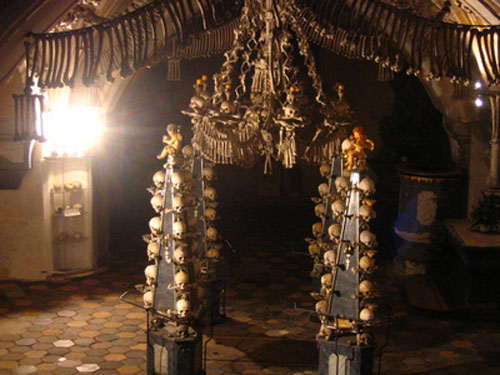 Just beyond the last step the room opens into a macabre foyer where four elongated marble pyramids adorned with skulls almost seem to be figuratively chewing off their own legs to escape. Atop these pyramids rest one small cherub each, blowing upon their trumpets as if to herald the spectacle that hangs from the center of the ceiling like a chandelier of death. Reportedly constructed from at least one of every human bone, the candelabrum becomes the focal point of the entire ossuary and one finds oneself admiring its intricacy and forgetting the morbid medium used for such art.

Knowing that we had been let in after hours and our sympathetic host was eager to get home on this cold night, we hurried about the building quicker than our intrigue would have liked. On every wall hung some sort of ornament of bone and vast stacks of human remains were piled high in smaller chambers barred by fence.

The bone collection was begun in 1511 by a Cistercian monk reputed to be half blind but nonetheless bequeathed the task of making room in the surrounding grave yard for new arrivals. Following the popularity of the still existent cemetery which resulted from its consecration as holy land through the sprinkling of dust carried back from Golgotha in Jerusalem, the human contributions of the black plague and the Hussite wars the burial grounds became much too overcrowded. 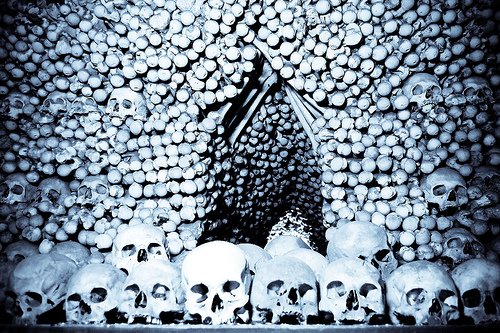 In 1870 Frantisek Rink was commissioned to turn the collection into a work of art by the noble Schwartzenberg family. The huge “man-made” coat of arms which adorns one of the walls is in-fact a replica of that which belongs to this clan of nobility.

It was only later after returning back to Prague in contemplative silence, that we became aware that the remains we were mesmerized by belonged to over 40,000 departed souls.