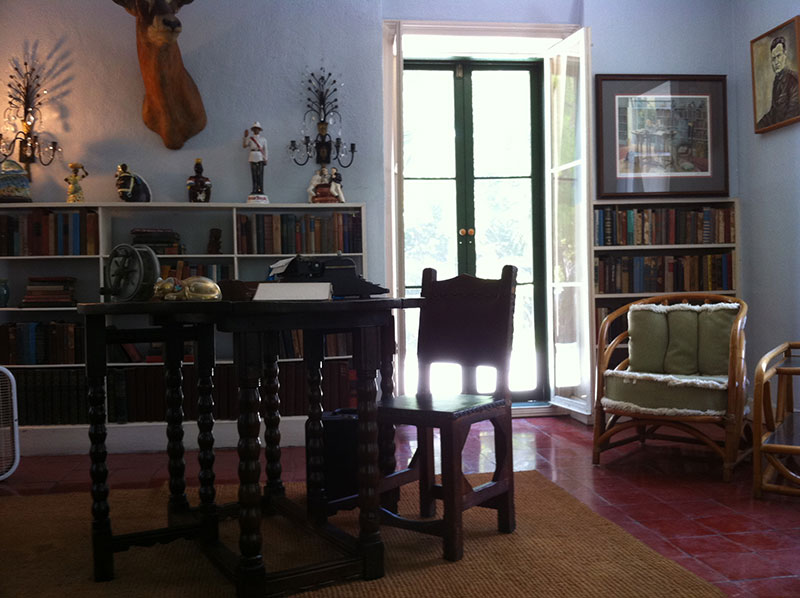 Assuming you survived your first day in Key West, it’s time to tackle the next 24 hours in true island style – with plenty of drinking and debauchery.

First things first though: stop for a proper breakfast and a visit to the Hemingway House for a historic and cultural lay of the land. 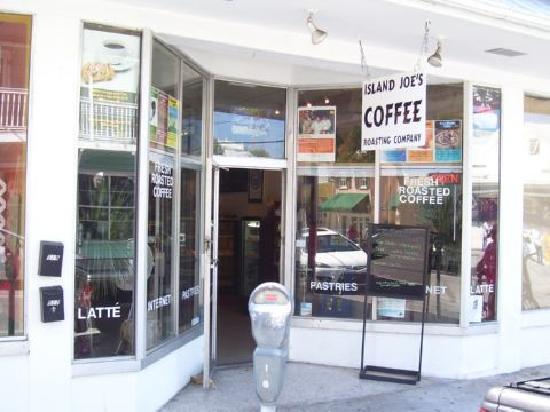 Given its close proximity to Duval Street, it’s easy to mistake Island Joe’s for just another tourist cafe. But this no-nonsense coffee shop is 100% pure Key West. Machinery, supplies and all manner of sundries required to keep the cafe’s wheels turning behind the scenes are … actually sprawled out haphazardly in plain sight.

And that’s a good thing. There’s no pretense here – it’s all just freshly baked breakfast treats and great coffee the same way they’ve been doing it for years. Menu recommendations are almost pointless since the fresh selection changes on a daily basis. When asked if there’s a menu, I’m regaled with a dozen variations of bagels, pastries, croissant sandwiches and other delectables. I opt for iced coffee and a near-football sized croissant with smoked bacon, egg and Swiss cheese. It’s a hearty on-the-go breakfast for sure, but I can work it off (somewhat) on the bike ride to the …

Ernest Hemingway was so quintessential to Key West history that the Ernest Hemingway Home and Museum may as well be the island’s de facto cultural center. Even if you know little to nothing about Hemingway’s life, you’ll instantly recognize how iconic he was in shaping the island’s history, culture and notoriety.

The beautiful home is well maintained and stands largely as it was when he resided there. Intricate architecture and lush landscaping abound and every room is full of fascinating artwork, photos and Papa’s memorabilia.

It’s all well worth the $12.50 admission. Be sure to allow at least an hour to 90 minutes and take the guided tour as well which is included in the ticket price. The resident guides are extremely knowledgeable, fun and clearly love working there.

With the requisite “culture vulture” stop out of the way, it’s time to get down to business.

Lunch … Anywhere You Can Get It

No doubt you’ll still be full from breakfast. But proper preparation for a Duval Street pub crawl means ensuring that you’re not imbibing on an empty stomach. Unofficial tradition (according to a survey I made up for this post) dictates starting from one end of Duval Street – east or west – and working one’s way in the opposite direction. Frankly, it doesn’t much matter because after three or four bar stops, you’ll be lucky to distinguish north from purple. 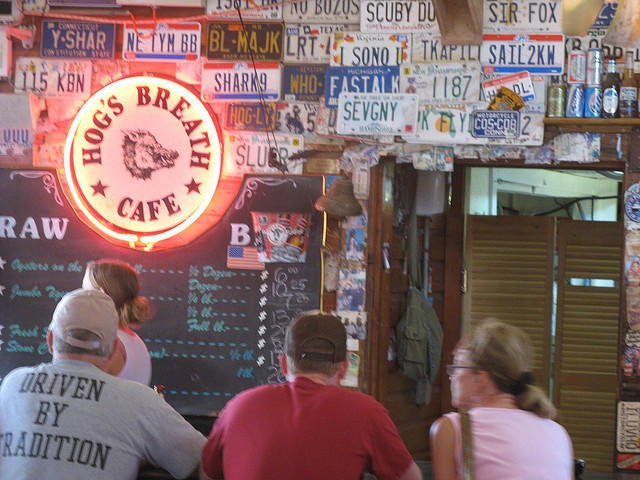 But, in the name of tradition, start on the west side with lunch at Hog’s Breath Saloon. It’s one of the most iconic bars in the whole of Key West, nay, the United States. The phrase “tourists and locals alike” is almost meaningless at this point, but at Hog’s Breath, you’ll no doubt be in the company of both.

The food and drinks here are relatively inexpensive and it’s all served with zero pretense. Grab an order of spicy conch fritters – an island favorite served with honey mustard and cocktail sauce. For my money, they’re some of the best on the island. Round that out with the softball-sized Fish Sandwich – their take on mahi mahi that’s coated with “hotdog dust” and perfectly grilled.

Did You Know: Duval Street is the only street in the world that runs from the Atlantic Ocean to the Gulf of Mexico

With a steady roster of daily entertainment playing near the bar, it’s easy to watch several hours roll by at Hog’s Breath. But resist the urge! The key to the pub crawl is one-and-done: sample the drink at each bar and move on.

With the necessary preparations in place (i.e. you’ve a full belly and you got your diving in yesterday), it’s time to partake in the island’s most infamous rite of passage. If you fancy yourself a drinker, do the incomparable Duval Street pub crawl because you should. It’s almost impossible to say you’ve truly “visited” Key West without making this inevitable journey. 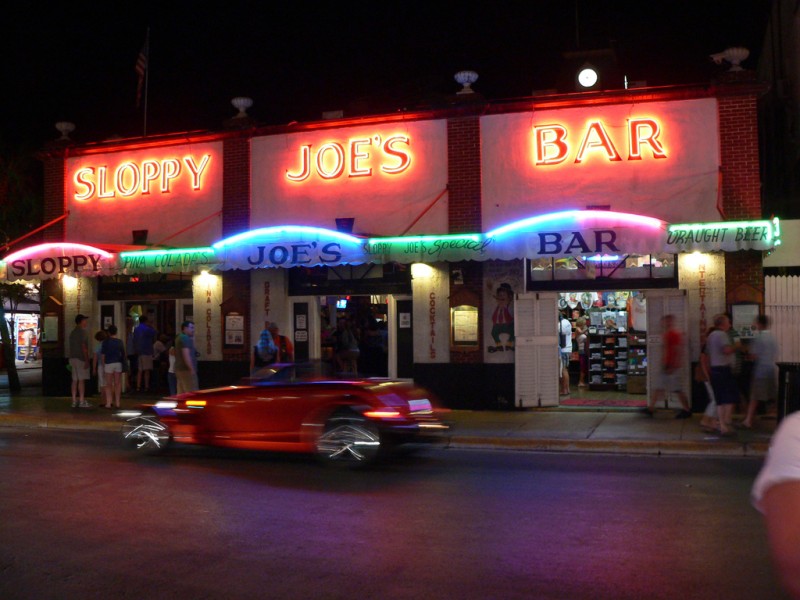 Working your way east, you’ll find Sloppy Joe’s Bar – a tribute to Hemingway since 1933 and arguably the most iconic bar in the whole of Key West. The Sloppy Rita is the signature drink and every cocktail is lovingly made with a “big boy” pour – about 20% more than your average dive. It’s of course all in keeping with the unofficial local axiom of getting plastered early and often.

Craft beer fans, don’t miss Joe’s Tap Room – a small, dedicated area off the main dining room that serves the same menu as Sloppy’s but with a solid list of draft microbrews to boot (including Rogue, Abita and Southern Tier to name a few).

A mere block away is The Bull & Whistle Bar – the last of Key West’s old-time open air bars. Like every Duval Street staple, it’s a great place for a drink. But of particular note is the notorious, rooftop The Garden of Eden. It’s Key West’s “only clothing optional bar”. (This is Duval Street – what’d you expect?)

Nearby is Caroline’s – a great, no-frills bar and restaurant with a sidewalk railing ideal for people-watching. And there’s hardly a more interesting “sport” on the island than people watching. It doesn’t matter the time of year.

If you’re so inclined, continue on past the Hard Rock Cafe and Starbucks (yes, even this far from the main land, they have those too) and pop in to Margaritaville “just to say you did it”. Or not. (If you’re looking for a good reason to stop in, check the entertainment schedule for singer and friend of Vagabondish, Tim Charron, who can sometimes be heard wasting away again in Margaritaville. Yup, I went there.).

Experience the Key West Sunset from the Water 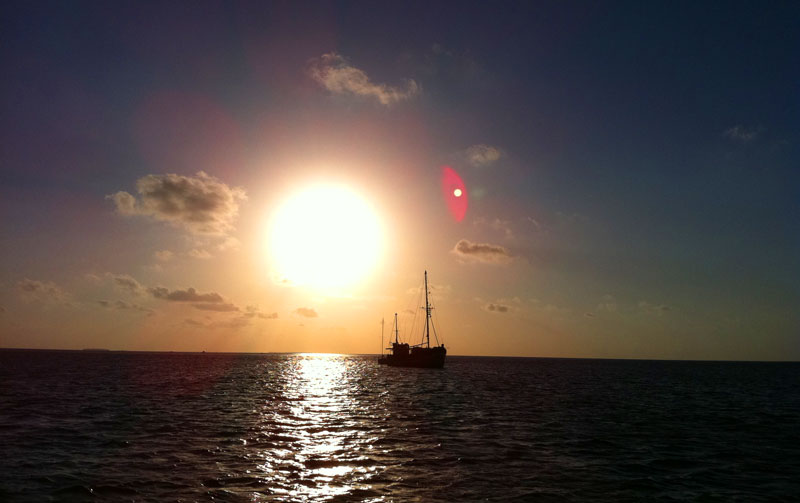 Before the sun dips below the horizon on your final night on the island, and before you get way too sloppy, stop by the Hyatt for a sunset cruise with Floridays. Unlike many local outfits, they only allow for small groups of passengers on their rather spacious yacht. This ensures an intimate experience that feels more like heading out on the water with a bunch of friends. The two-person crew – Alexis and Jenna – were extremely accommodating, ensuring that our glasses were well topped-off (with their complimentary beer, wine and champagne) throughout the cruise.

The roughly two-hour journey is breathtakingly beautiful and typically sails from the tip of Fort Zachary State Park (where the Atlantic Ocean meets the Gulf of Mexico), around Sunset Key and back again. It’s the perfect way to cap off your final day on the island.

Back on land, recharge with dinner at Jack Flats. Bartenders and waitstaff around the island routinely recommended this sports bar for its solid menu, affordable eats and great service. Perhaps most important: the kitchen is open later than most. Best bet for a late night snack (or entire meal) is the chili which is meaty and plenty hearty.

For dessert, there simply isn’t another option (unless you’re a Communist) than the island’s world famous key lime pie. It’s long been a love-it-or-leave-it treat. For the folks that “get it” (my people), these five words trigger all the brain’s pleasure centers: chocolate covered key lime pie. And there’s no place better (believe me, I’ve tried) for this and all manner of key limey goodness than Old Town’s famous Key Lime Pie Outlet (424 Greene St / 305.296.9515).

Owners Robin, Bob and Mallory have been providing locals and tourists with awesome, hand made pies and … pretty much everything key lime-related for years. Their newly expanded retail shop offers a dizzying array of key lime treats, from candies to cookies to condiments.

Their not-so-secret? Forget the artificial, neon green crap peddled at grocery stores around the country (as well as many other shameless key lime pie outlets on the island) because Key Lime Pie Outlet uses authentic, honest-to-goodness, 100% key lime juice. Trust me: it makes all the difference.

If you’re intent on tasting true key lime pie … or key lime *anything* for that matter … ask how a place makes it before buying. Many of the shops use key lime concentrate imported from Brazil. That’s like trekking to Oktoberfest to drink Coors Light. Sure, it’s not “wrong”, but it’s not exactly authentic either. 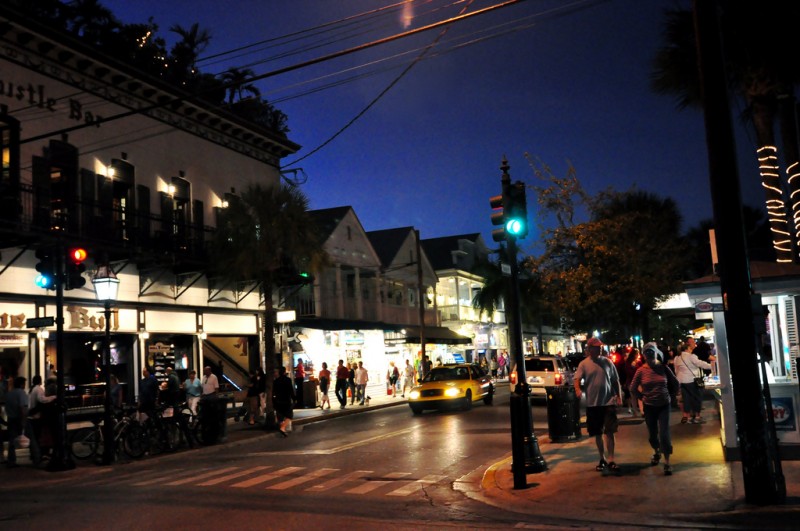 Full and probably still buzzed (you did take advantage of the complimentary cocktails onboard, didn’t you?), the whole of Duval Street awaits. An entire guidebook could be written about great Key West bars, but my picks, in no particular order, would be: Captain Tony’s Saloon which prides itself on being “the original Hemingway’s Sloppy Joe’s”; Irish Kevin’s and nearby Rick’s Bar – there’s always a crowd and a good time at both; and Willie T’s – a rowdy, open air bar just down the road a bit.

At this point, you’re either heading home … or back to The Garden of Eden. If the latter seems like a good idea, it’s time to head home. Trust me.