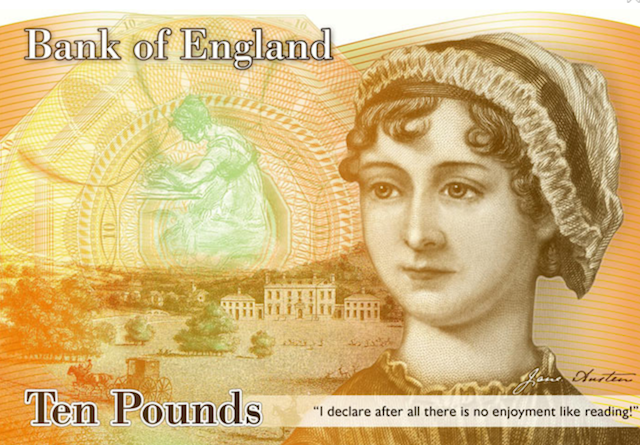 Whether you’re a literary buff or not, your future travels in the United Kingdom could have you carrying Jane Austen with you wherever you go.

In a decision that has proven surprisingly controversial, the Bank of England has chosen to feature Jane Austen on its Â£10 note. Starting in 2017 her portrait and a quotation about the joy of reading will appear on all newly minted bills. The beloved author will replace Charles Darwin, who has been depicted on the Â£10 since 2000.

The Bank of England regularly features historical figures on its currency, and there has been an outcry lately over the obvious lack of women honored this way. When it was announced that Elizabeth Fry would be replaced by Winston Churchill it was quickly pointed out that there would be no women (other than Queen Elizabeth II who is on all British currency) on any of current versions of the bills. The addition of Jane Austen is believed to have been a step taken toward addressing that deficiency.

Check out more about this in The Guardian