Indian Restaurant Offers a Deadly Combo of Dining and Ambience 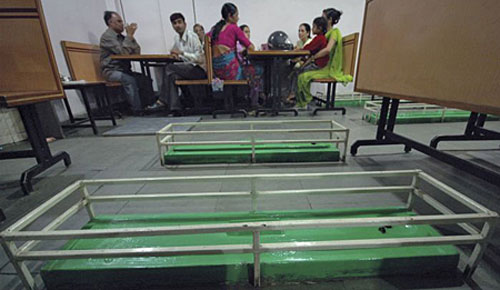 At the New Lucky restaurant in Ahmedabad, India, the soft, buttery rolls are to die for. Don’t say that too loud however, seeing as the setting includes some quaint tables, rusty chairs and a few dozen graves.

The owner Krsihan Kutti Nair who built the restaurant that’s spread out over a centuries old Muslim cemetery, doesn’t know who the patrons in the basement floor are, but claims their presence has been great for business. And he’s right. Business is brisk at the bustling restaurant where the graves are scattered erratically.

The plan wasn’t to begin a restaurant right in the middle of a cemetery. In India, however, where death and life mix as smoothly as tandoori chicken and rum, and reincarnation theories are a permanent fixture of folklore and Bollywood movies, people aren’t as spooked by graveyards as Westerners are. Plus, in a country of a billion with space at a premium, graveyards are often used for commercial and even residential purposes. The constant flow of relatives, who visit graveyards to visit their dead kin, has meant that these macabre locations are actually great from a business point of view.

So when Nair’s partner K.H. Mohammed set up a tea stall outside this particular graveyard, and business quickly exploded, it proved logical to expand in the immediate vicinity — graves and all – until the compound included the entire cemetery.

The graves themselves, green in color and shin length in height are said to belong to the relatives of a 16th century Sufi saint whose tomb lies nearby.