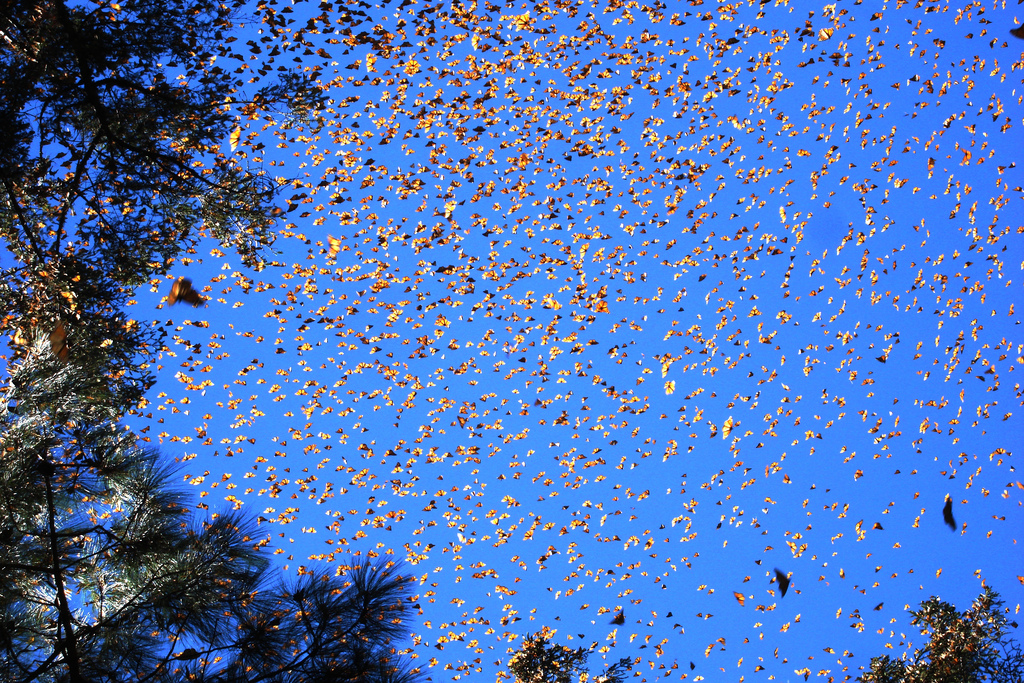 How Travel Taught Me the Importance of “Home”

The first time I held a living monarch in my cupped hands was in a eucalyptus grove in Oceano. By California standards, the morning was chilly even though the sun was out on a late January morning.

The grove, owned by the nearby city of Halcyon, was believed to be land on which Native Americans thrived. I walked in awe under the towering trees with my friends Pat, Caity and Colin. The dogs, Nigel and Ginger, ran circles at our heels.

I spotted the monarch lying motionless on the ground. Fearing it was dead, I picked it up and squealed with delight when it twitched against my fingers. Then I spotted another one nearby. And another. I looked up and noticed the eucalyptus above me was covered in butterflies, but they were barely moving.

When monarchs get cold, they lose the ability to fly. They rely on the sun to warm their flight muscles and give them mobility. Most monarchs can crawl at temperatures of 41 degrees Fahrenheit, but need a temperature of 55 degrees to fly. These orange and black beauties were chilly.

Later that year in October, I was on the other side of the continent. It was a lovely day by Canadian standards in Cobourg, Ontario, even though I was shivering. The wind off the water whipped sharply against my skin, but the monarchs didn’t seem to mind. They fluttered playfully with the wind, weaving their fragile bodies in figure eights across the shore.

What are they still doing here? I wondered. Shouldn’t they be heading south?

Why do you go away? So that you can come back. So that you can see the place you came from with new eyes and extra colors. And the people there see you differently, too. Coming back to where you started is not the same as never leaving.

Could I really blame them for lingering? After all, I was also clinging to my northern home well past the shorts-and-t-shirt season. I was here to celebrate Canadian Thanksgiving with my family. It had been two years and 40,000 miles since I had last seen them.

Thanksgiving was better than expected. The affectionate welcome from my family and the joy of reuniting with my sisters made me wonder why I had been in such a rush to leave.

Two years ago, I boarded a plane at Toronto’s Pearson airport with a dismissive wave and a “good riddance”. I was floundering in a dead-end relationship, overwhelmed by family drama, and frustrated with a lack of trail races. I needed space to breathe. Physical space. I needed mountains and single track and solitude. I needed to be miles away.

In San Diego, I found a surrogate family of trail and ultrarunning friends. I immersed myself in the outdoors. The mountains were a salve for my soul.

I disassociated with everything I had left behind in Toronto and quickly lost touch. Canada had left a bitter taste in my mouth. I had only seen a sliver of it””a city where I didn’t fit in, and for two years I rolled my eyes at the thought of ever returning. From San Diego, I had followed the west coast to Alaska. Then last September I asked my boyfriend Shacky if we could drive across Canada. Part of me hoped that it would be wonderful. Another part hoped it would be terrible””to prove that I had been right to leave.

Then Alberta happened. Then Columbia Icefields, Jasper National Park and Banff. My jaw dropped at the vast snow-peaked mountains, crystal-clear waters and wildlife that didn’t know how to be afraid.

In Canada, we traveled through some of the most spectacular scenery my nomadic eyes had ever seen. More scenic still than the Alaska highway, the Columbia Gorge, or the lush trails of Oregon””especially beautiful to me, because it was home. This was a country I had always known, yet never known at all.

I discovered friends in Manitoba, enjoyed the hospitality of strangers in Prince Edward Island, and was humbled by the dramatic tides of the Bay of Fundy. Small towns warmed my soul and my heart began to swell with the pride of being a Canadian.

A few months earlier I had been nodding my head at Mark Twain’s account in Roughing It (1872). He, too, had moved to California in 1864 as a journalist, and was inspired by travel.

I posted the following Twain quote on my Facebook wall:

Travel is fatal to prejudice, bigotry, and narrow-mindedness, and many of our people need it sorely on these accounts. Broad, wholesome, charitable views of men and things cannot be acquired by vegetating in one little corner of the earth all one’s lifetime.

The first to reply was Michael Sean Comerford, a hitchhiker we had picked up in the Yukon. Michael had been on his way to Anchorage to work at a carnival, but he was a journalist by trade. For one year, he was traveling as a nomadic carny and surviving on carny wages. He was blogging from the road and gathering experiences for a book. Michael carried a tiny notepad where he carefully wrote down our names, and we have been friends ever since.

Expecting Michael’s comment to be pro-travel, I was surprised to read what he actually typed. He said:

Twain simply did not meet all people or travel to all ”˜little corners’ of the earth when he wrote this. I’ve met extraordinary people who’ve never traveled. And what does it mean that he traveled and yet became a misanthrope toward the end of his life.

Michael’s reply made me pause and think of all the wonderful people we have encountered on our journeys. They were not nomadic. Many of them were 9-5’ers. They had families. They had communities. They had homes.

They offered us food and hot showers and hospitality, opening their lives and sharing everything they had. Far from narrow-minded, they have helped us reconsider our own prejudices and assumptions.

They are trees and we are butterflies. They are less mobile, but no less important, and it is lucky for us that they are rooted to the ground””a safe place to land.

I understand this now. … And Finding My Way

. When Outside magazine posted an article about McCandless’ death, the comments lit up in a heated debate between two distinct positions: those who supported McCandless and those who were disgusted by him.

His supporters described him as someone who was really living and never hurt anyone. They attacked naysayers with the disturbing implication that people who hold steady jobs and stay close to their families are somehow not fully living.

The opposition identified McCandless’ travels as selfish and indulgent. They insisted that he did indeed cause much pain to his family.

These days, I am forced to pause and re-examine my day-to-day.

Has my life become so much about mountains, trails, and summits that I am neglecting the relationships that matter the most? Have I called my mom? Have I written to my sister? Have I Skyped with my friends?

Earlier this month I received an email from a lady named Camille who wanted to profile me for a feature she was writing. The topic was the evolution of the American Dream as it passed from parents to children. What did the American Dream mean to me and what had it meant to my parents?

This was a topic I had been churning in my brain for some time. Over Skype, I told Camille about my dad’s immigration to Canada, his struggle to provide stability for me, and his quest to accumulate the possessions I grew to shun: a house, a car and all the amenities of a comfortable life.

At times, I’ve felt guilty about my choice to abandon all the things my parents worked so hard to give me. I reconcile those feelings by reminding myself that my parents didn’t struggle to give me a physical house, but rather freedom””the freedom to educate myself, to write exactly what I think, and to take the unpopular route. I am free to define success on my own terms.

Still, I feel a pull when I’m away from my family and I attribute that to a newfound sense of maturity. It’s that moment when you’ve wandered enough miles to know where your family lives and why it’s important that they know where you are.

After Thanksgiving dinner, it’s already dark outside. I button up my winter coat and follow my family out to the car to say our goodbyes. After hugs and promises to stay in touch, my sisters pack into my mom’s green mini van and make themselves comfortable in the backseat for the long drive back to Toronto.

Kayla, my ten-year-old baby sister, is squashed in the back corner of the van. I can barely see her little limbs as she wiggles back outside at the last second. She races toward me and throws her arms around my neck for one last hug. She sobs into my shoulder while my family waits in the car.

I smooth her hair and hug her tight. I tell her how much I love her and how beautiful and strong she is. She can barely catch her breath between her tears.

Kayla’s outpour surprises me. I am as surprised as McCandless might have been to learn that his parents loved him deeply””except I have lived to see that affection firsthand.

I am more than a nomad, a trail runner and a mountain bum. I am the big sister who sends postcards but rarely calls. And Kayla is the ten-year-old who misses me so very much. 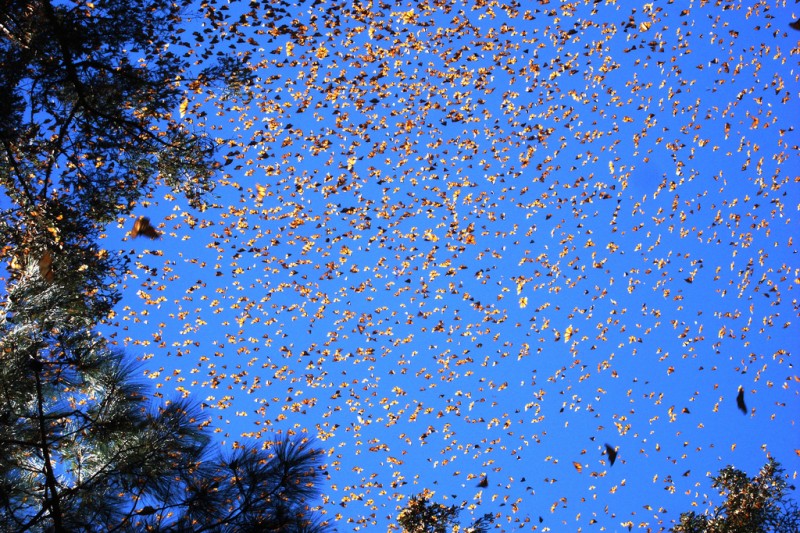 And that’s when it clicks. I know now why the monarchs have not migrated. Their loved ones are rooted to the earth, and they must linger until the last possible second before flying away.

What is that feeling when you’re driving away from people and they recede on the plain till you see their specks dispersing? It’s the too-huge world vaulting us, and it’s good-bye. But we lean forward to the next crazy venture beneath the skies.

— Jack Kerouac, On the Road