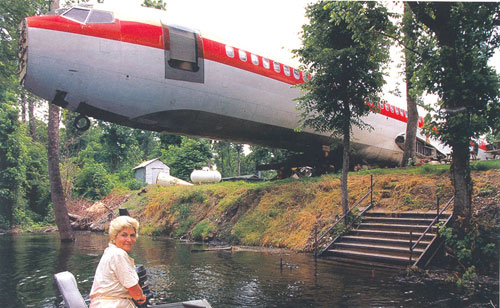 Grandma’s Living on a Jet Plane

Since, 1994, Jo Ann Ussery has been enjoying a high flying lifestyle.

That year, Jo Ann found herself homeless after a storm bought trees down on her house and the spunky grandma was forced to look for alternative housing. Her brother-in-law, who happened to be an air traffic controller at Greenwood Airport, suggested she look into the possibilities of living on a retired jet liner. There was an aircraft salvage company nearby that specialized in outfitting jet liners.

Buying her own plane was hardly a million dollar purchase. Jo Ann paid a grand sum of $2000 for the plane, a retired Continental Airlines aircraft. An additional $24,000 went into making the plane habitable and she used plenty of old interior parts salvaged from other retired aircraft.

Daytime illumination is abundant, thanks to the 76 side windows and 10 windows in the cockpit, and so is storage space — the overhead baggage compartments still provide plenty of space.