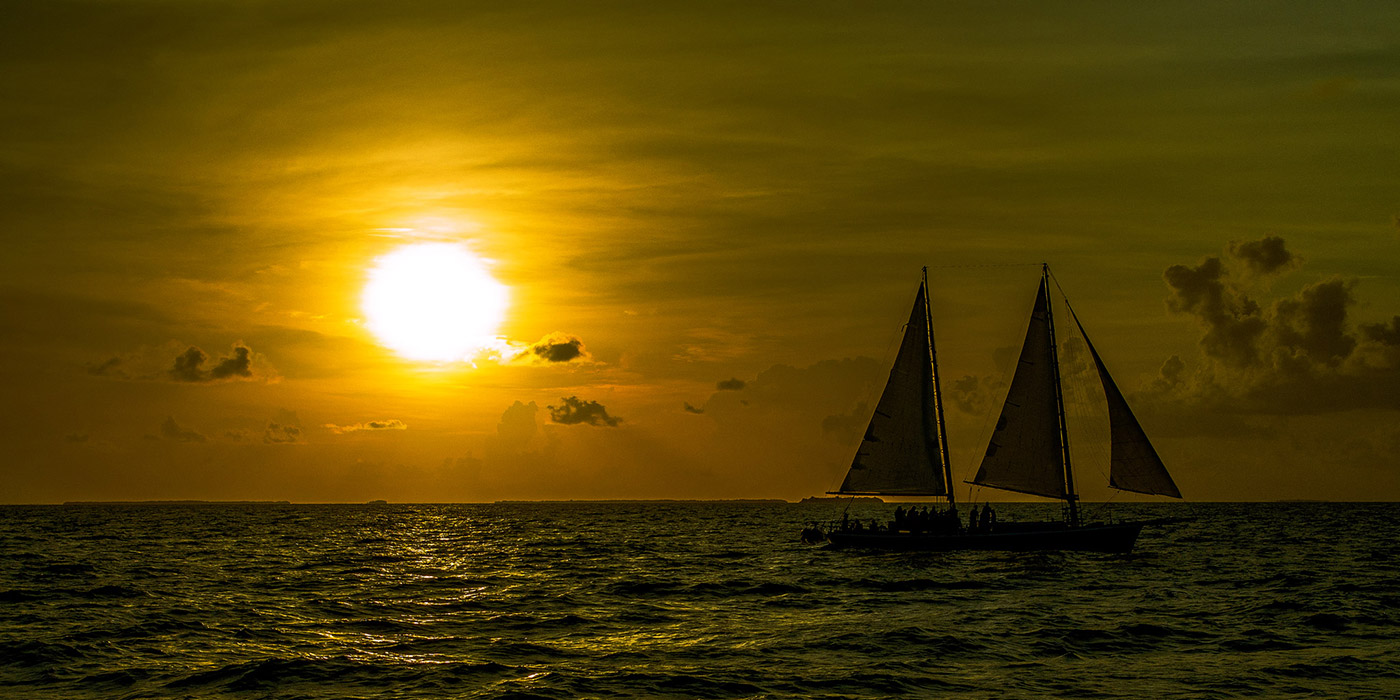 Visions of Key West: (Another) 48 Hours in Florida’s Southernmost Outpost

As a Florida native, I can safely say that few destinations within the state pack as much history and hedonism together into a smaller area than Key West. I wrote of the island in 2011:

It’s been dubbed “Key Weird” and often dismissed as little more than a “huge floating bar”. And by most all accounts, that’s exactly what it is. So much has been written about Key West, it’s a wonder that anything new and interesting can still be said of the continental United States’ southernmost outpost.

It’s the kind of place where a “well-manicured lawn” consists of a five-foot tall plastic pink lawn flamingo and an industrial-beer-vat-turned-stand-up-shower. Because … well, why not? 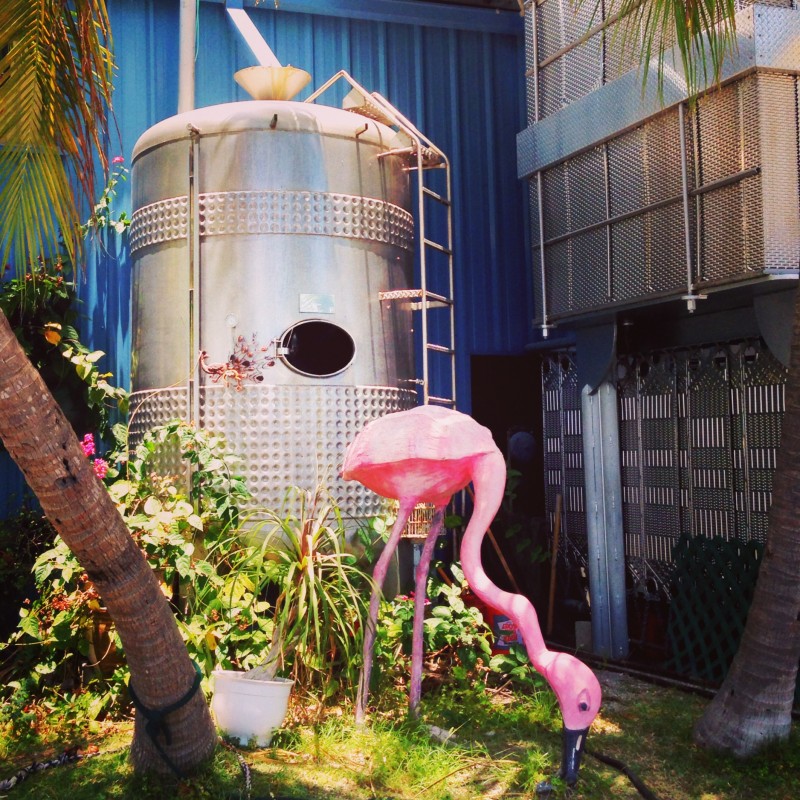 It’s important to not ask questions, to go with the flow. Which is exactly what I did for nearly a week in the Florida Keys. It’s always new and exciting, no matter how many times I visit.

Here I take a brief look at some of my fondest, random memories …

The island of Key West is a bucket list destination for most anyone with a pulse in the United States. Signs beckon tourists from every corner of the country … 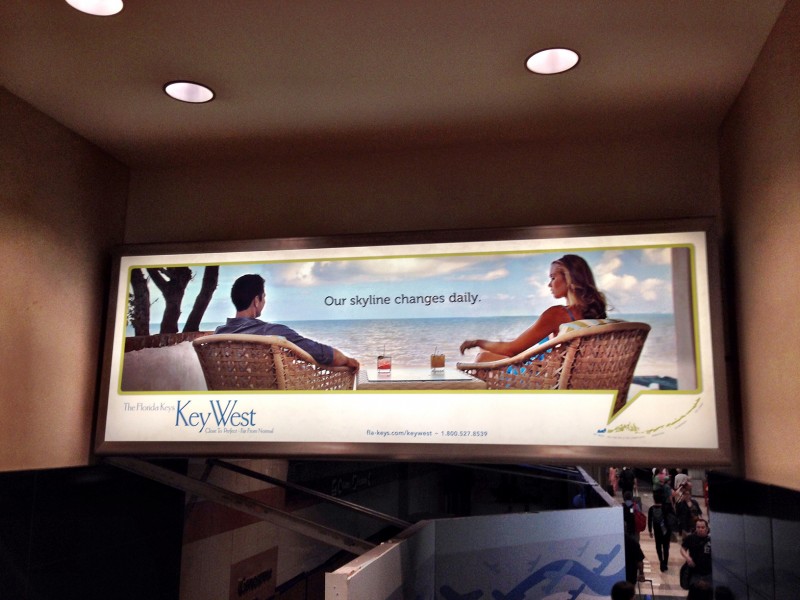 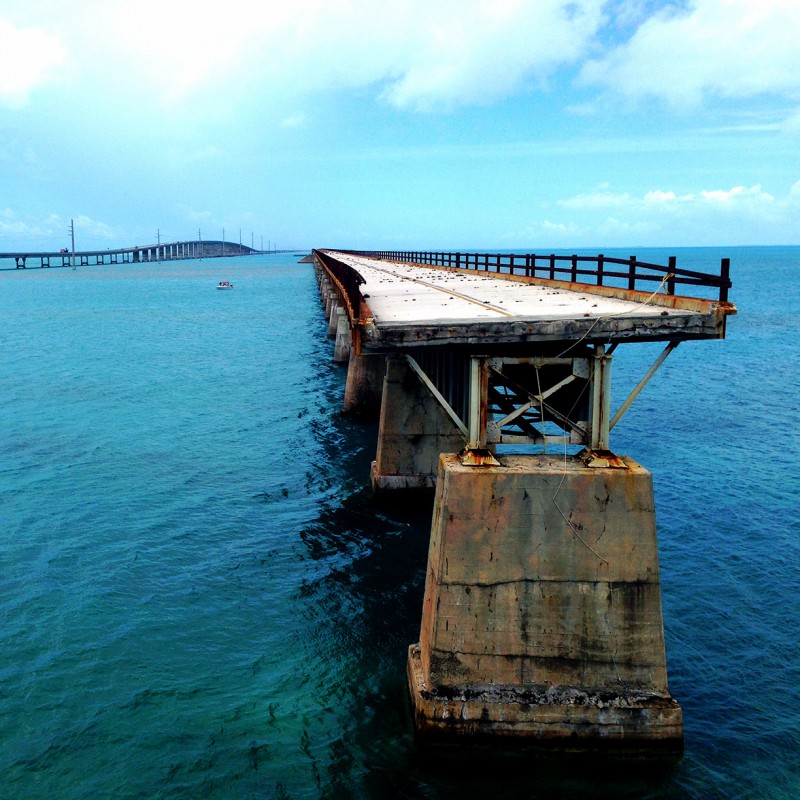 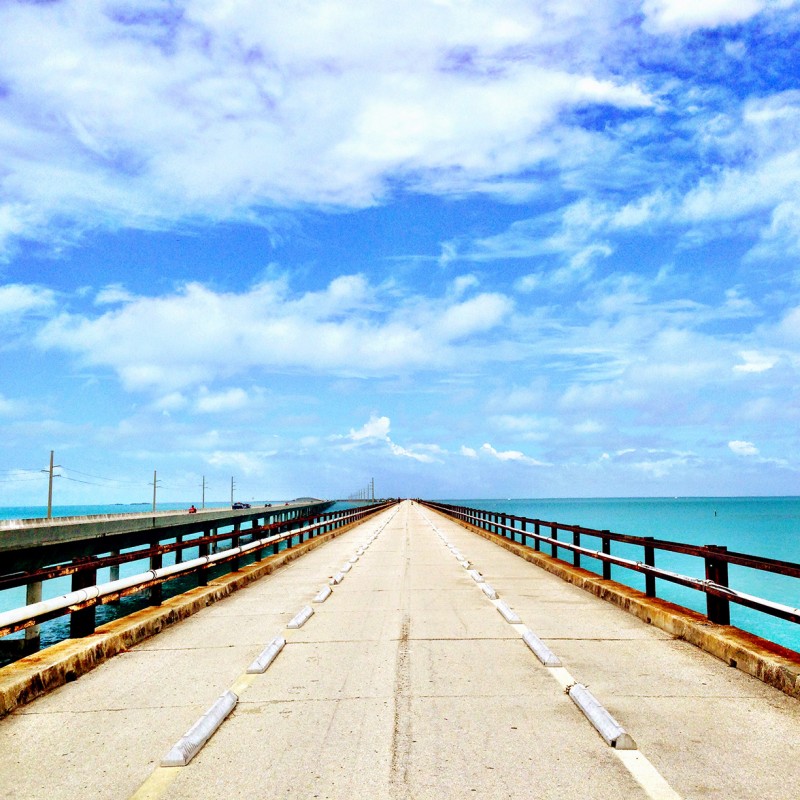 … or flying in to its tiny, charming island airport … 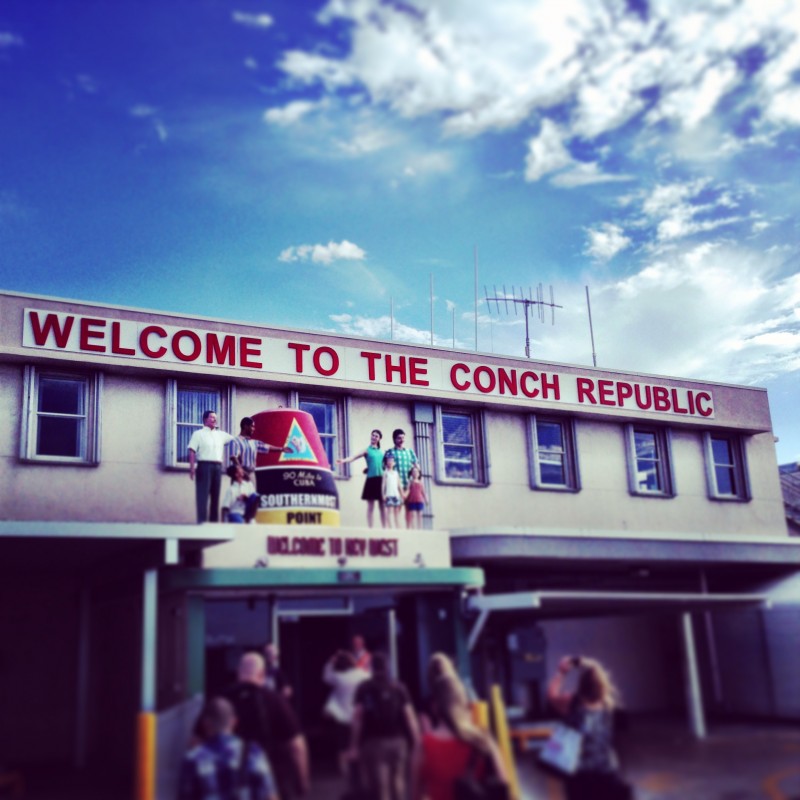 … you’re always greeted with a sense that you belong. No matter how strange you might be.

The people of Key West recognize their sunsets as award-winning, spectacular, breathtaking. So much so that “Sunset Celebration” is a proper noun on the island. A mere hour after arriving, it’s easy to see why.

I dropped my bags at the beautiful, oceanfront Westin Key West Resort & Marina. 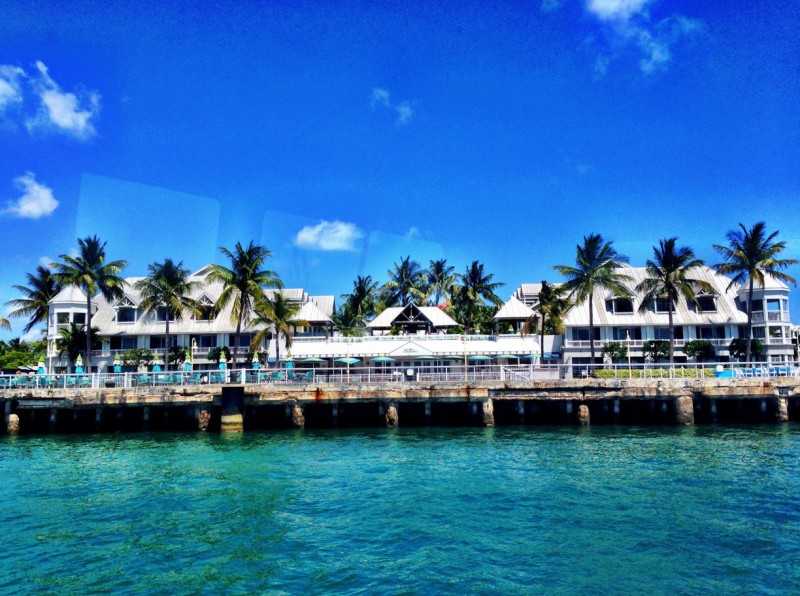 Minutes later, I snapped this photo from the hotel’s sunset deck without even really trying: 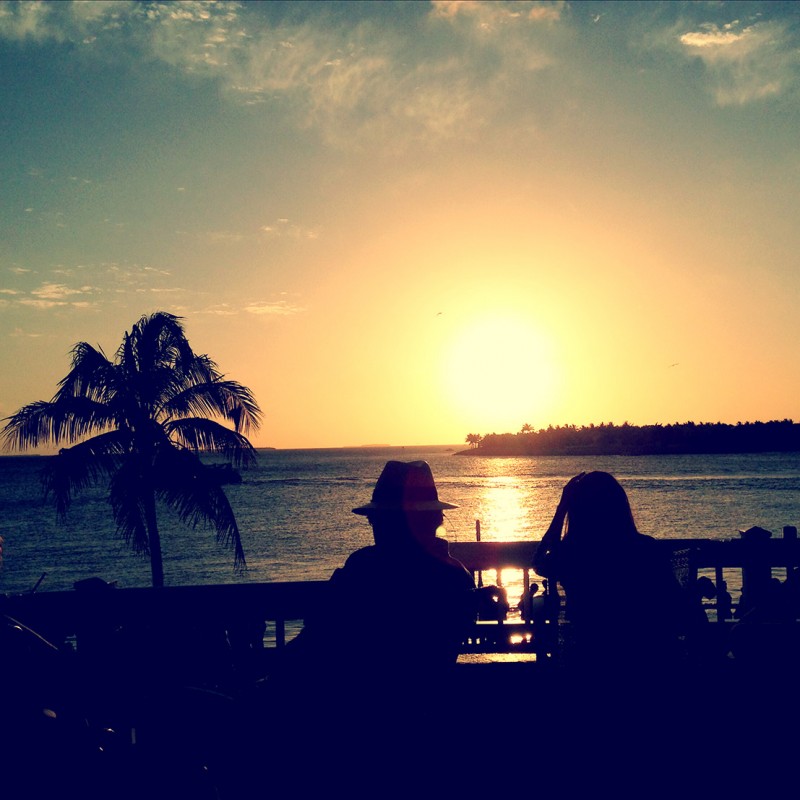 … and so did some other guy: 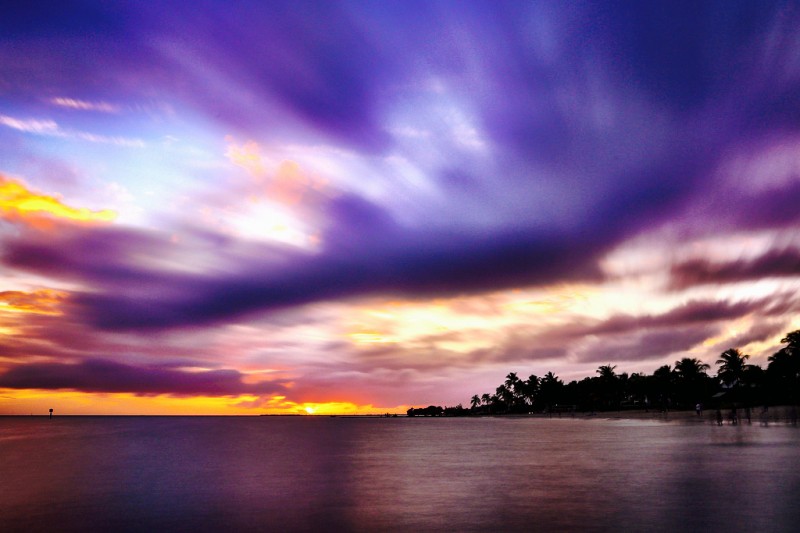 But I highly recommend a walk to Mallory Square any day of the year to experience a “proper” Sunset Celebration. The plaza fills quickly with tourists, buskers, fire jugglers and people who love natural scenic grandeur (read: anyone with a pulse). 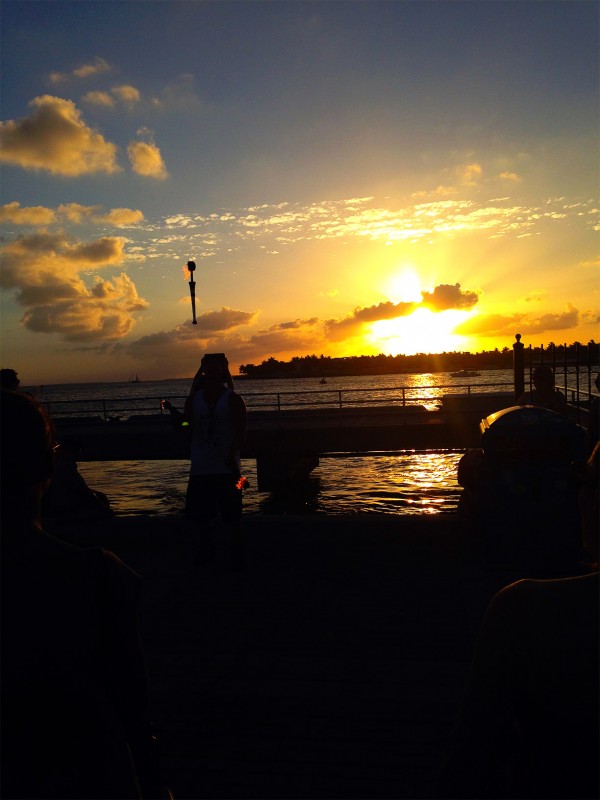 They’re all waiting for that one perfect sunset shot … 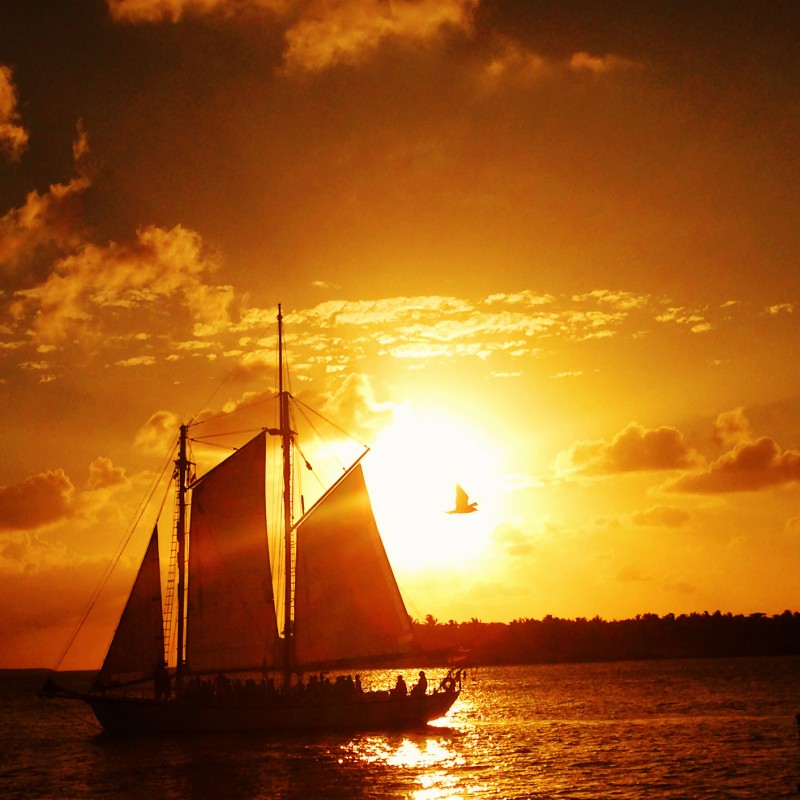 It’s not difficult. With clear, unobstructed views to the western horizon, this happens every. Single. Day.

The scenery (and, let’s be honest, copious amounts of alcohol) may well be the reason why the island is among the most laid-back destinations in the whole of the U.S. As evidenced by this guy whose T-shirt epitomizes the Florida Keys mindset (not a grainy photo – he was just a very grainy man): 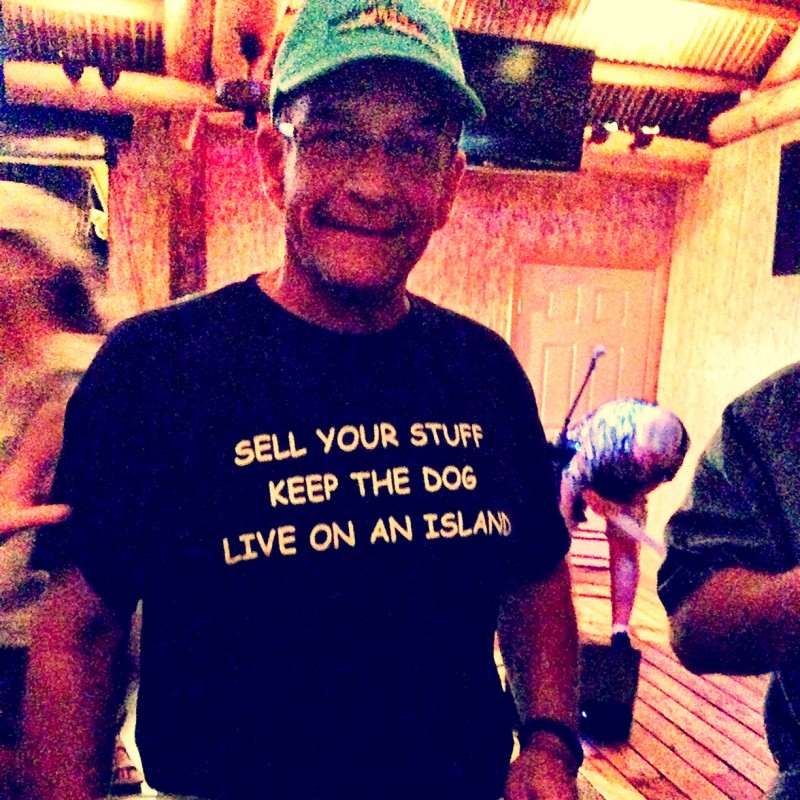 Even by chill, “island dog” standards, the canines here are insanely laid back: 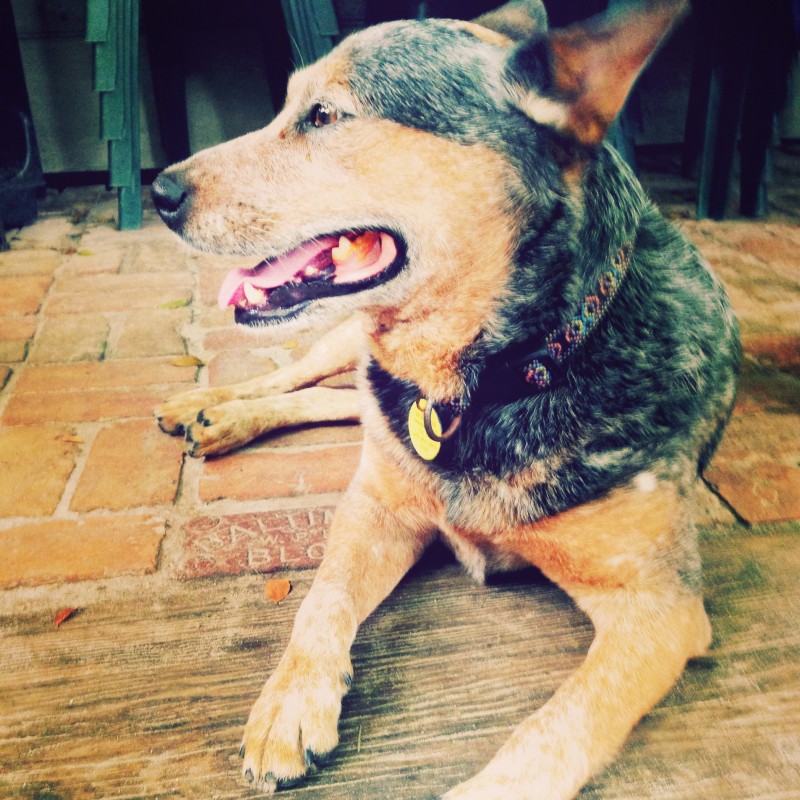 Wake up early (say, noon) for breakfast at one of the coolest places on the entire island: Blue Heaven. I’m loathe to use the cliche “it’s where you’ll find locals and tourists alike.” 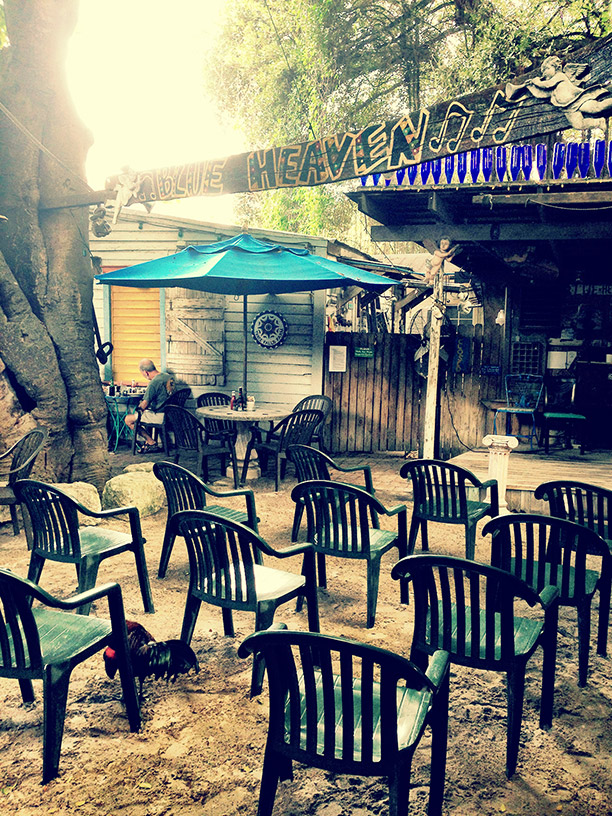 But seriously: everyone loves Blue Heaven. Especially if your idea of fine dining is plastic lawn furniture, wild chickens at your feet and breakfast so good, it’ll (as they say in the south) “make you wanna slap your mama!” 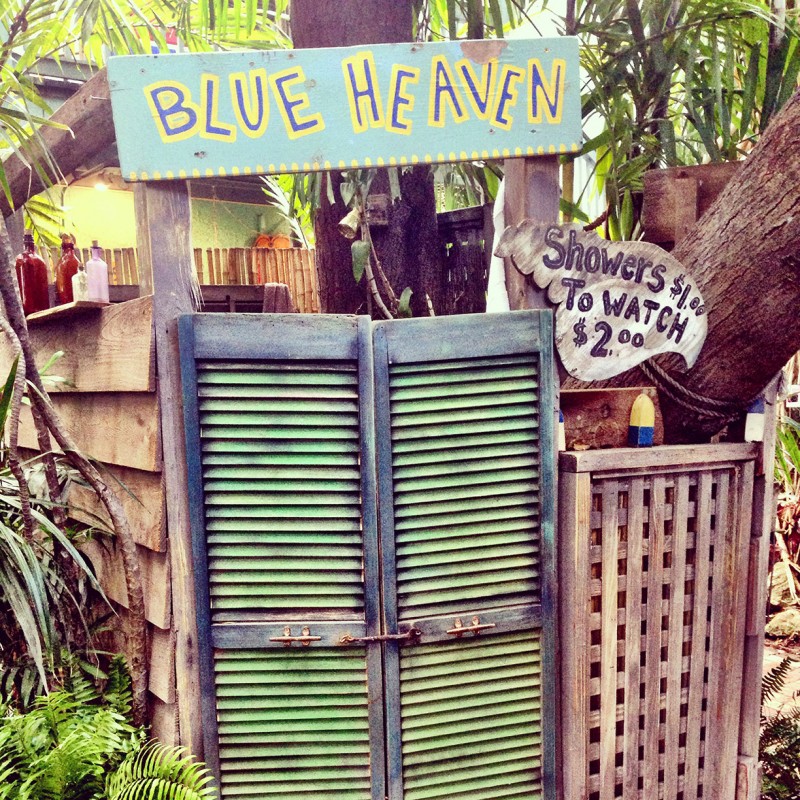 Seriously, the breakfasts here are outstanding and their Eggs Benedict is among the best I’ve had anywhere in the world. Check out the BLT Benny, which includes bacon, fresh Florida lobster, and tomato with a healthy dose of (completely heart-healthy) lime-infused Hollandaise sauce.

Even locals have to admit that key lime pie is their officially unofficial dessert. And few places do it better (and taller – the meringue alone stands nearly 8″ off the top of the pie!) than Blue Heaven: 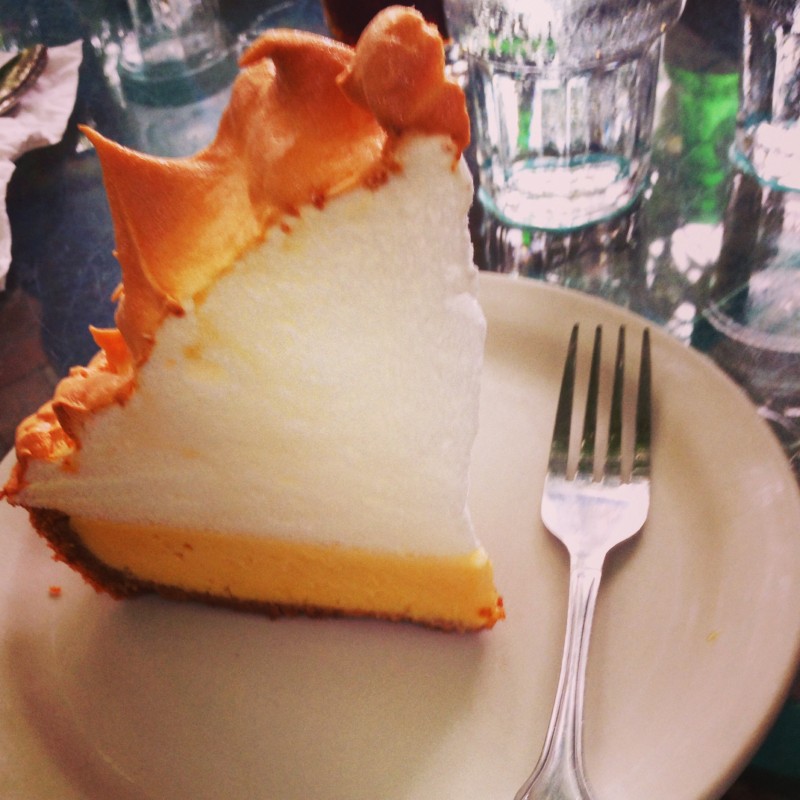 Who cares if you’re having it for breakfast? You’re on vacation.

Speaking of which, the officially unofficial drink of Key West isn’t, as Jimmy Buffet might have you believe, margaritas. It’s root beer barrels (root beer schnapps and the cheapest local lager you can find) and there’s no better place to slam ’em than the Green Parrot Bar. 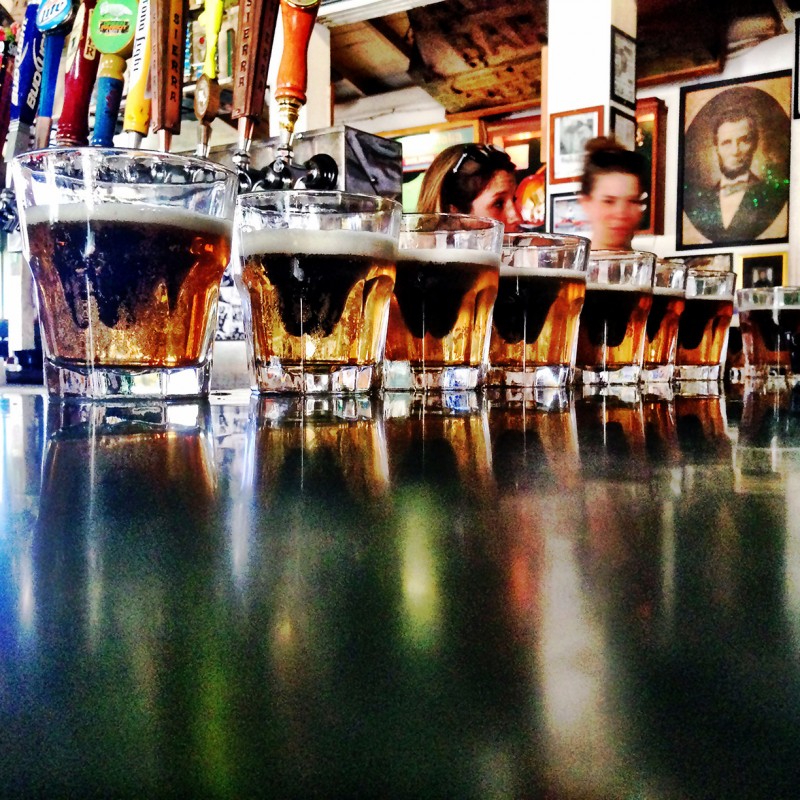 It’s among the oldest continuously operating bars on the island, where locals are perfectly content to line ’em up at 10 o’clock in the morning.

While you’re at it, why not explore the island’s first legal rum distillery? Sure there’ve been scores (perhaps hundreds) of distilleries on the island, but Legal Rum distillery is the first … well … legal rum distillery. Owner and distiller Paul Menta is happy to take you on a tour of the small, but fascinating location that opened just this year. 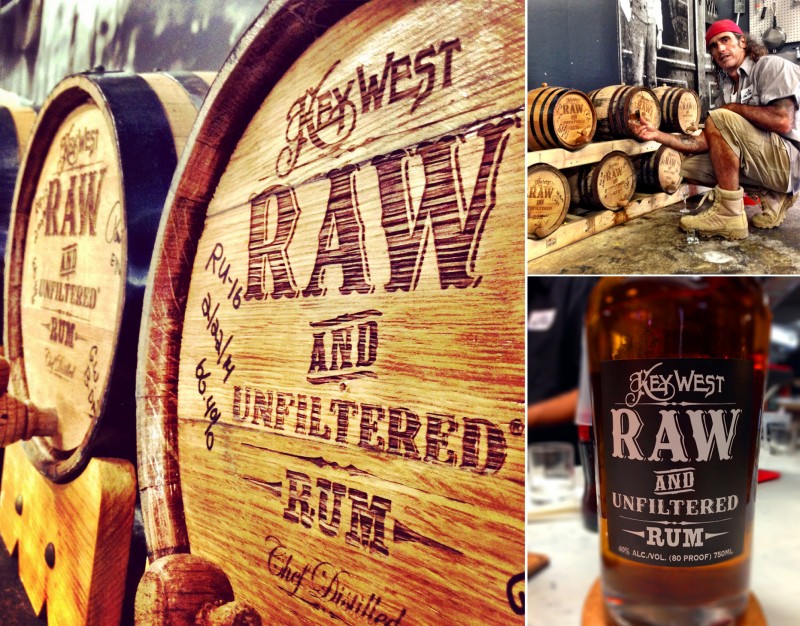 But there is more to the island than chasing happy hours. So much revolves around beach life and all things marine – riding it, diving it, exploring it. Check out the quaint Key West Aquarium for a sampling of marine life unique to the Florida Keys. 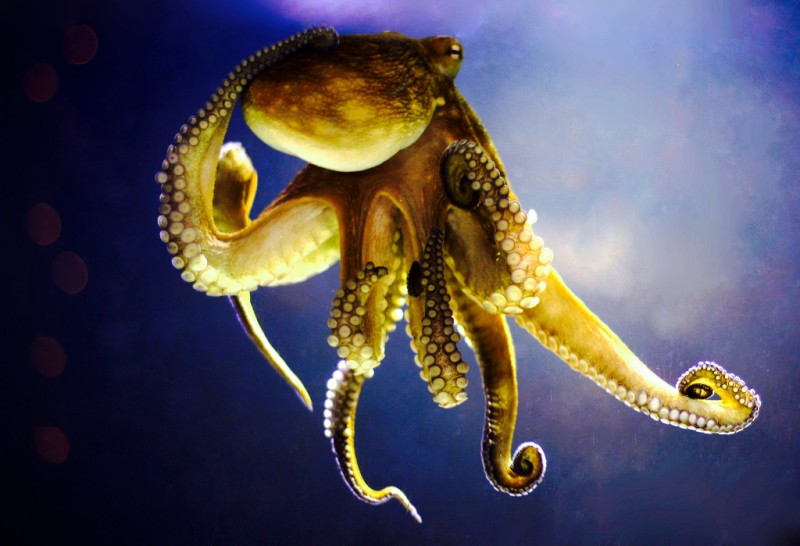 Or rent a bit of fishing kit and wile away the day, pole in hand, down by the water just about anywhere around the island … 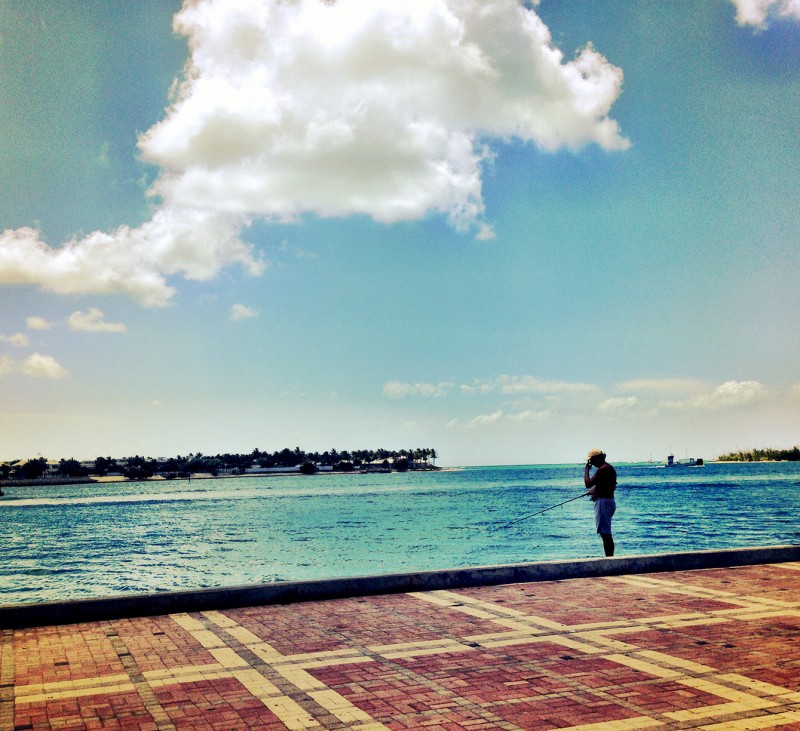 With such a long and sordid history, you might imagine there are many, many skeletons (literally and figuratively) in the island’s closet. Take a ghost tour of its most allegedly (our lawyers make us say that) haunted spots – and there are many. 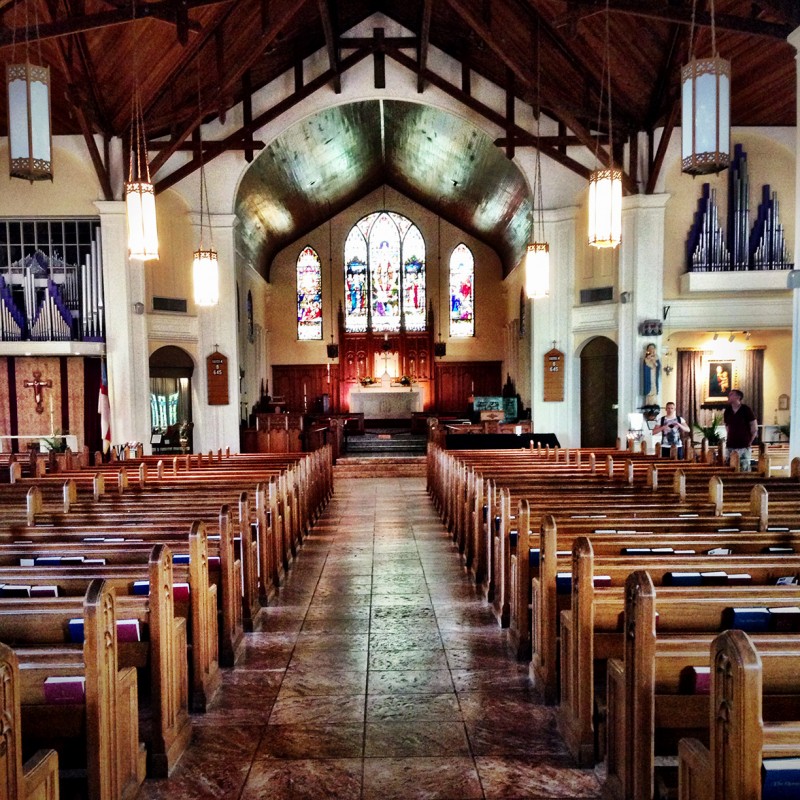 David Sloan — arguably the most well-educated human being on the history of Key West — leads not just ghost tours, but ghost hunts. Visitors can take “a stroll through Old Town’s ‘Dead Zone’ using the ghost hunting equipment seen on TV to capture spirits at Key West’s most active locations.” Geeky, spooky and just plain awesome.

Oh, and definitely take your picture with the famous Mile Marker Zero sign. It’s a staple of Key West and all the locals do it. 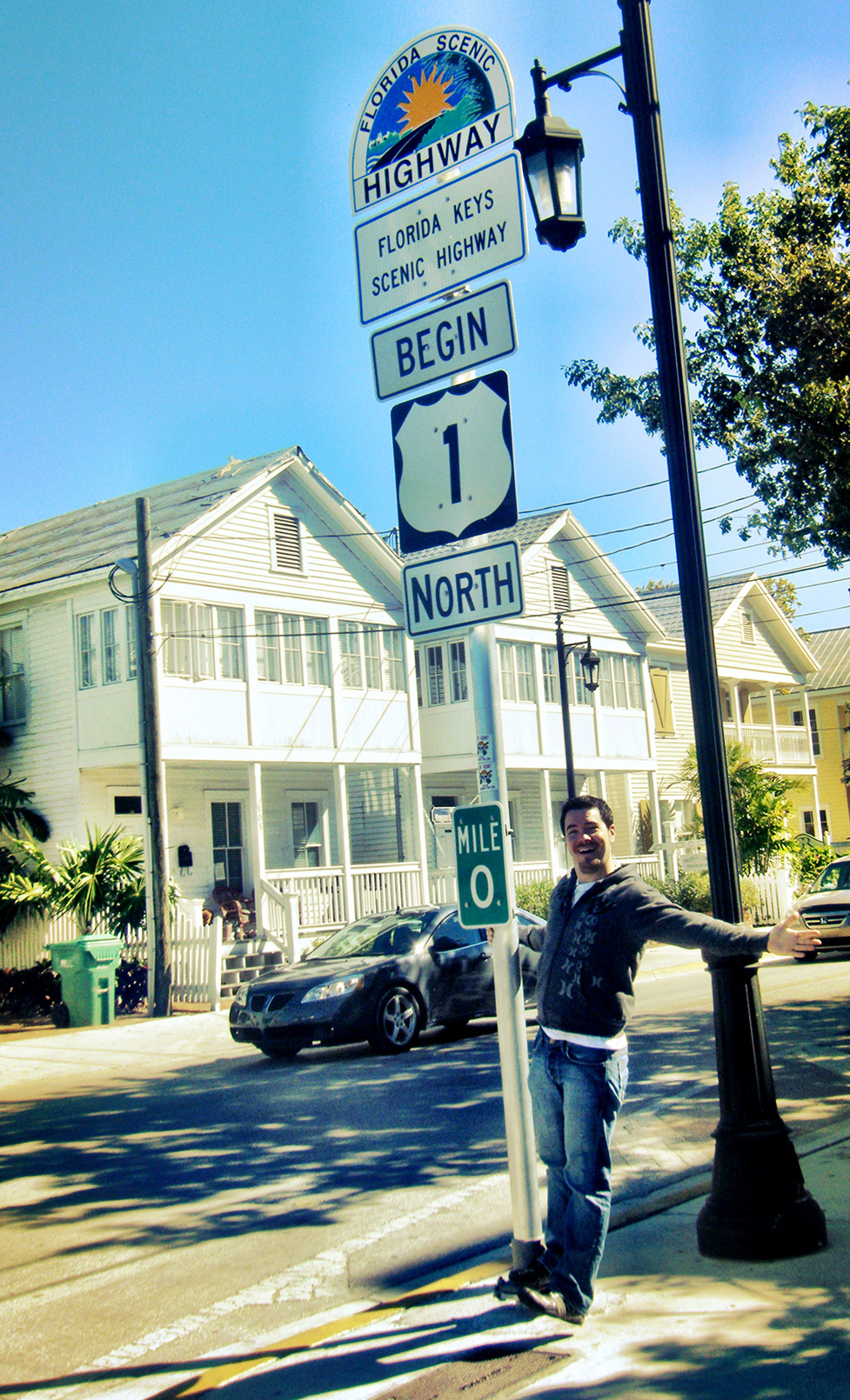 Really? No, not really. But I had to do it anyway.

All photos © Mike Richard except where noted.