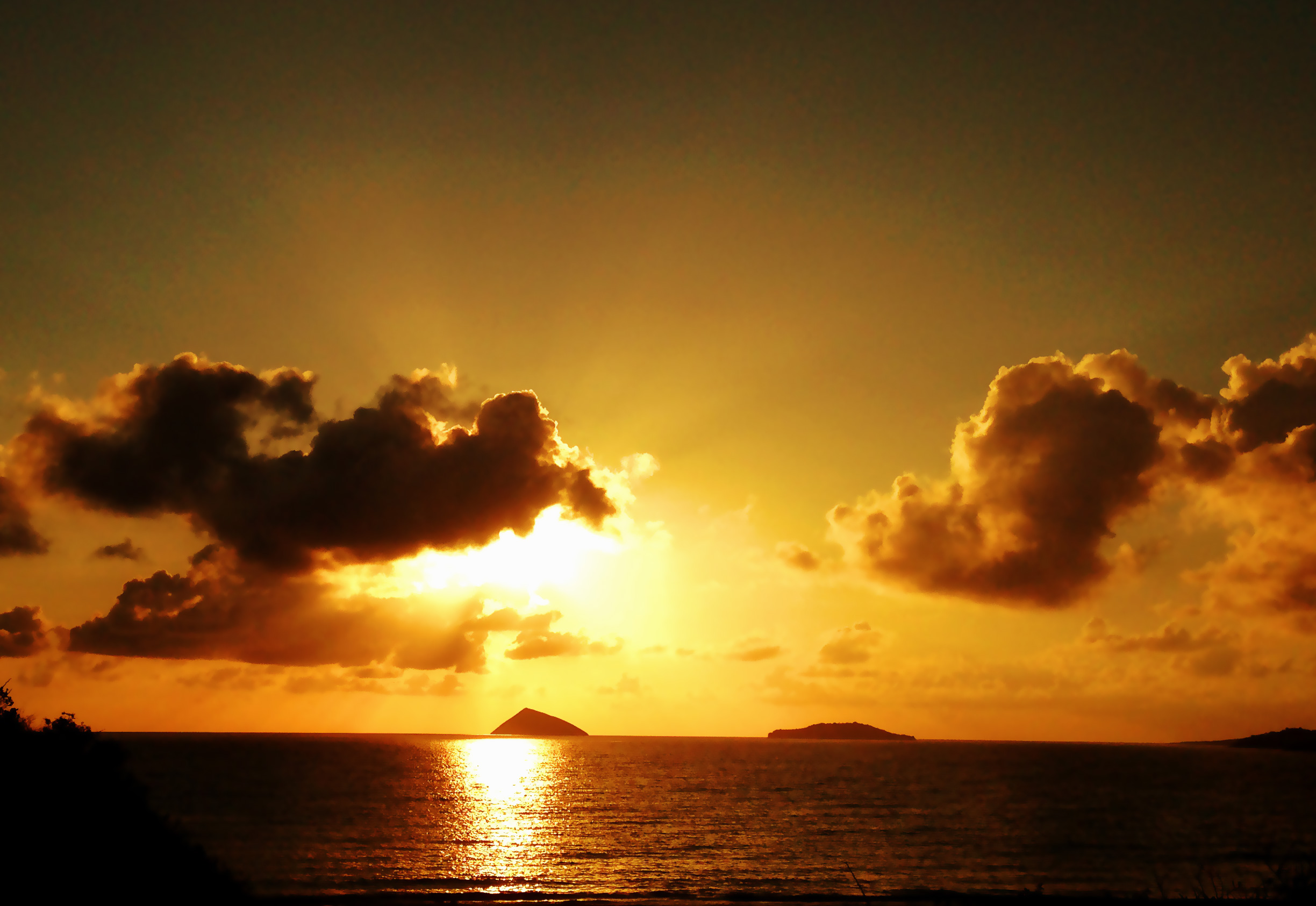 Visions of the Galapagos Islands: Adrift in Ecuador’s Most Famous Archipelago [Gallery]

Recently, we had the good fortune of cruising the Galapagos Islands for a week with Ecoventura luxury cruises. It was a truly unforgettable, once-in-a-lifetime (maybe) experience from which we’re still reeling.

Here, just a taste of our favorite photos that perfectly capture our time on and around the islands …

It all starts with a stiff Irish coffee in Guayaquil … 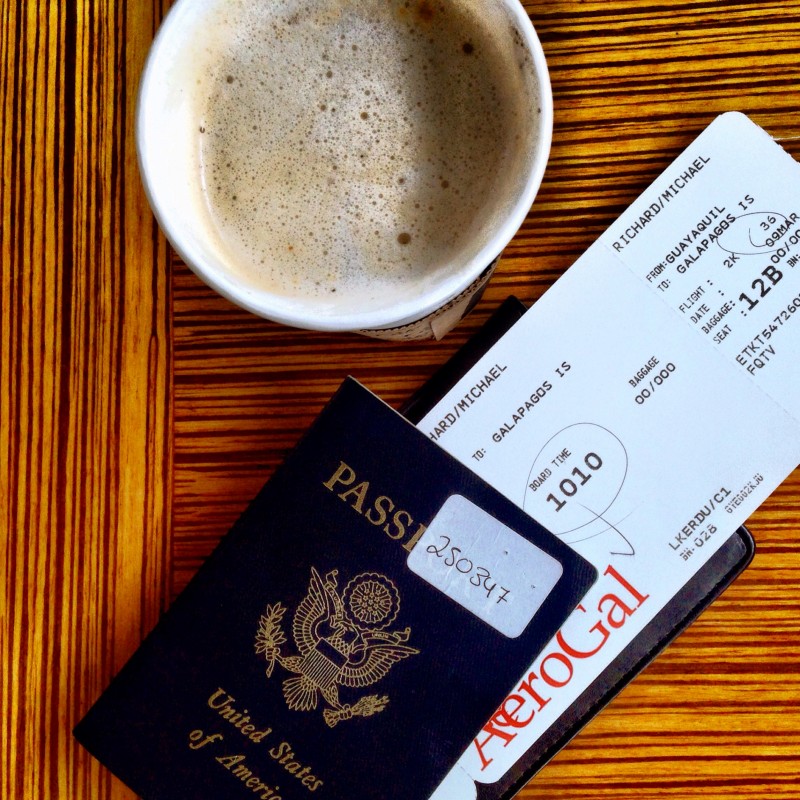 Boarding the Ship for a Full Week at Sea

Taking a cruise is perhaps the best possible way to experience everything the Galapagos Islands have to offer. 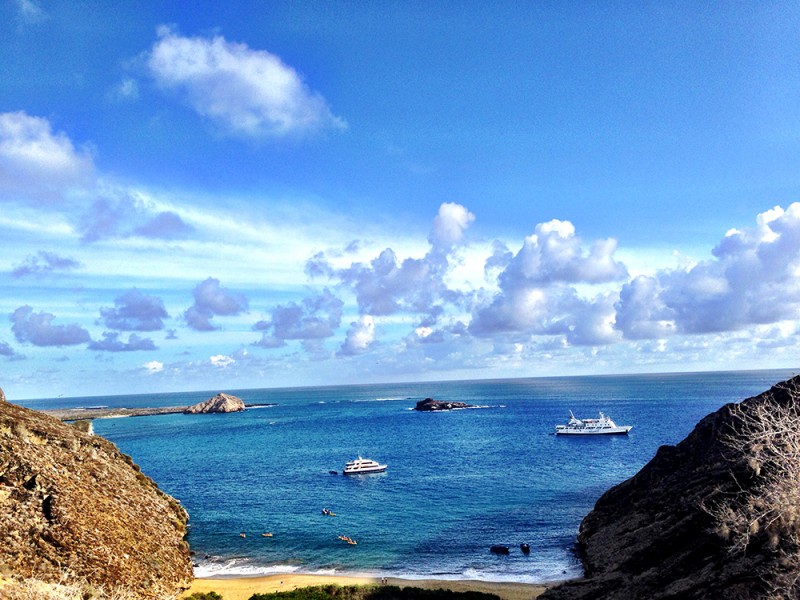 A Frigatebird Hovers Effortlessly Over the Ecoventura Letty

Before almost any other animal in the Galapagos, you’ll likely be greeted first by any number of seabirds. Frigatebirds hold the record for “largest wingspan relative to their body size” of any bird in the world. It’s no wonder that they can float high above boats at sea for hours. 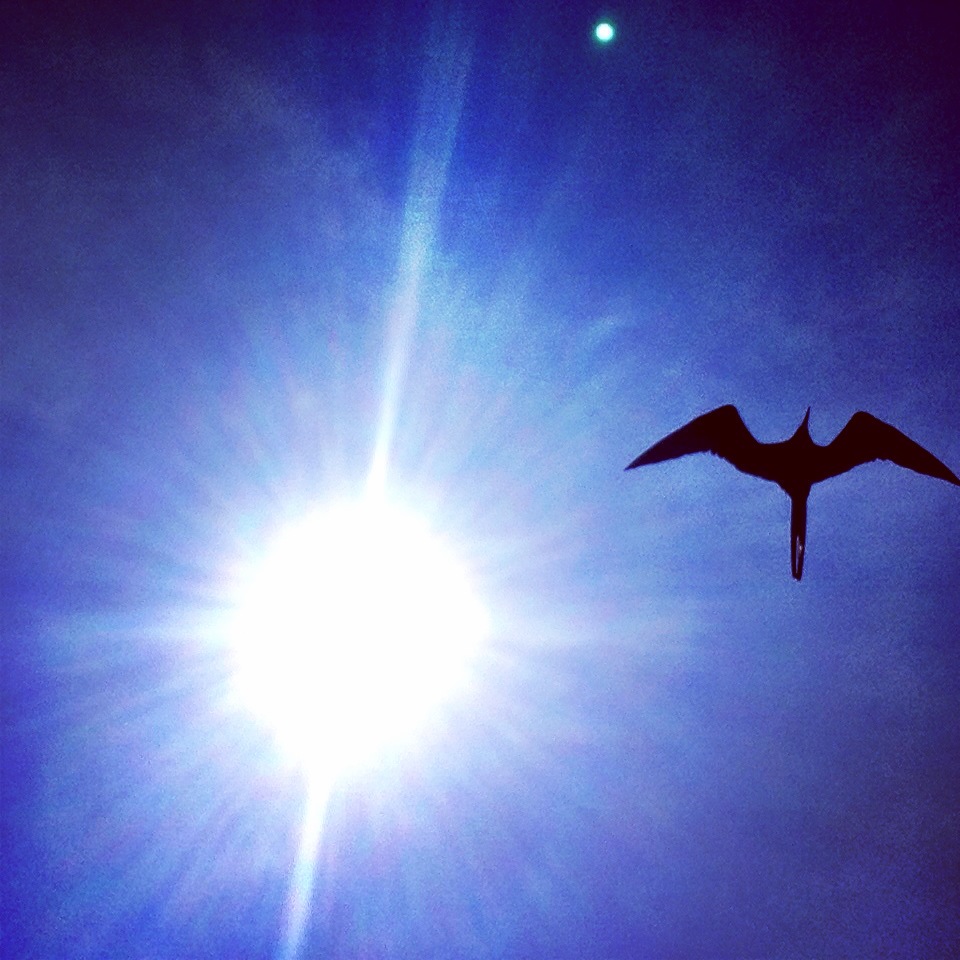 … and sea lions rank a close second in the sheer number living on the islands. By the end of day two, we found it near impossible to take a picture of any other animal without being photobombed by one of these insanely adorable things. 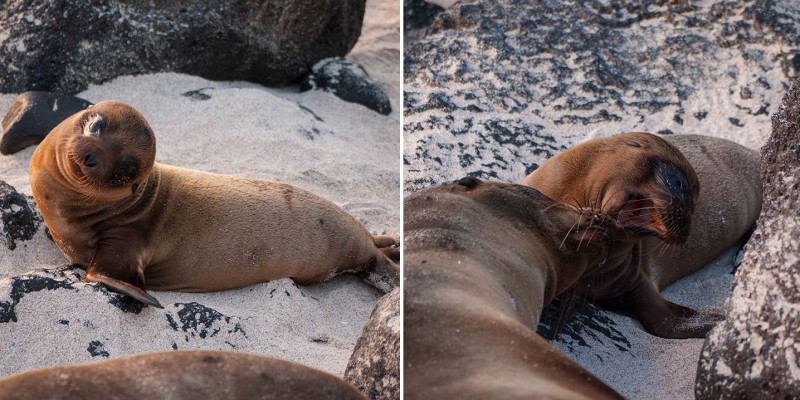 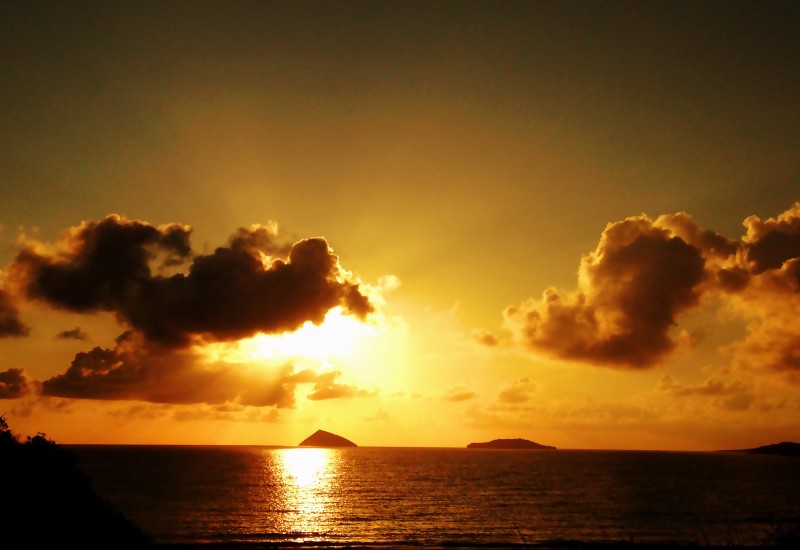 The stunning color of the Sally Lightfoot crab makes these common crustaceans quite photogenic. 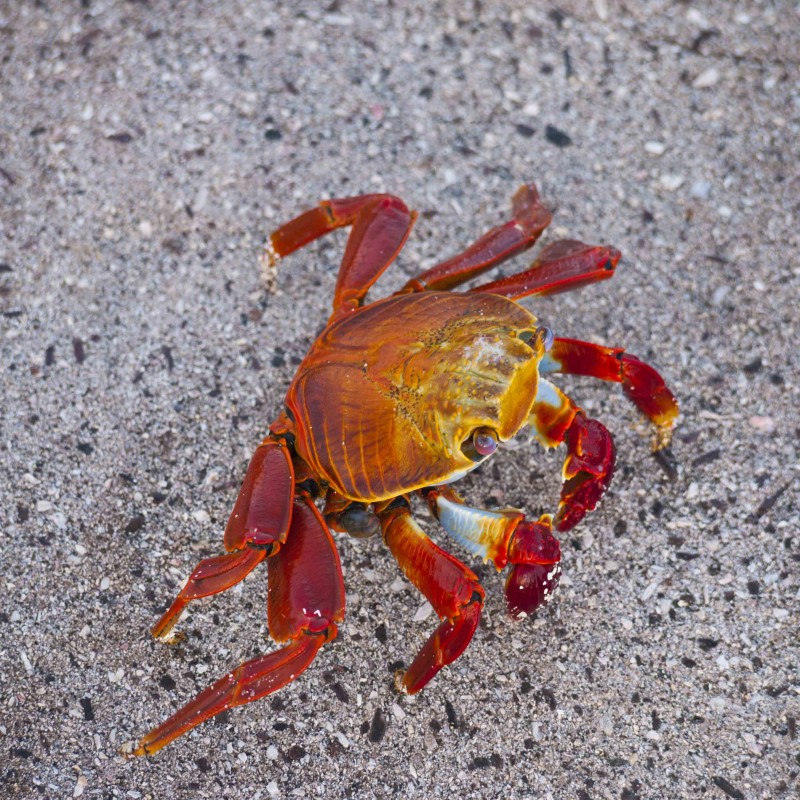 A Myriad of Seabirds

The swallow-tailed gull is found almost exclusively in the Galapagos Islands. As they nest on steep, rocky cliffs, they’re often found in dramatic (and quite photogenic) overlooks throughout the islands. Although, they clearly don’t always get along …

The Galapagos Islands offer several varieties of booby species. Among the most common: the Nazca Booby. Perhaps the most interesting (and sad) fact about Nazcas:

Nazca Boobies are known for practicing obligate siblicide. Mothers lay two eggs, several days apart. If both eggs hatch, the elder chick pushes its sibling out of the nest area, leaving it to die of thirst or cold. The parent booby cannot intervene and the younger chick inevitably dies. Two eggs are laid so that if one gets destroyed or eaten, or the first chick dies soon after hatching, the second egg will produce an offspring. 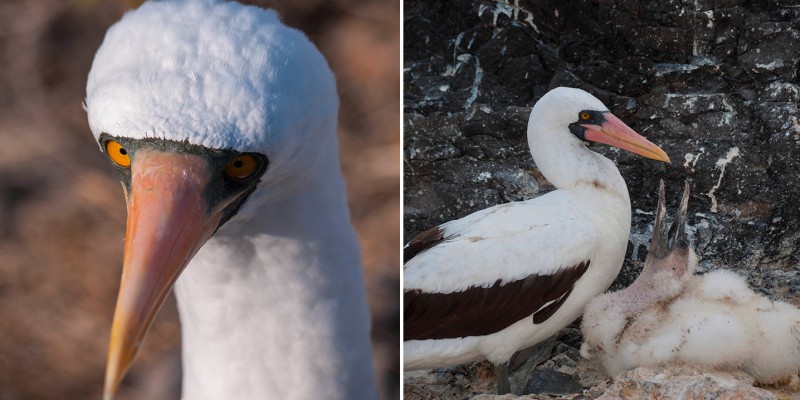 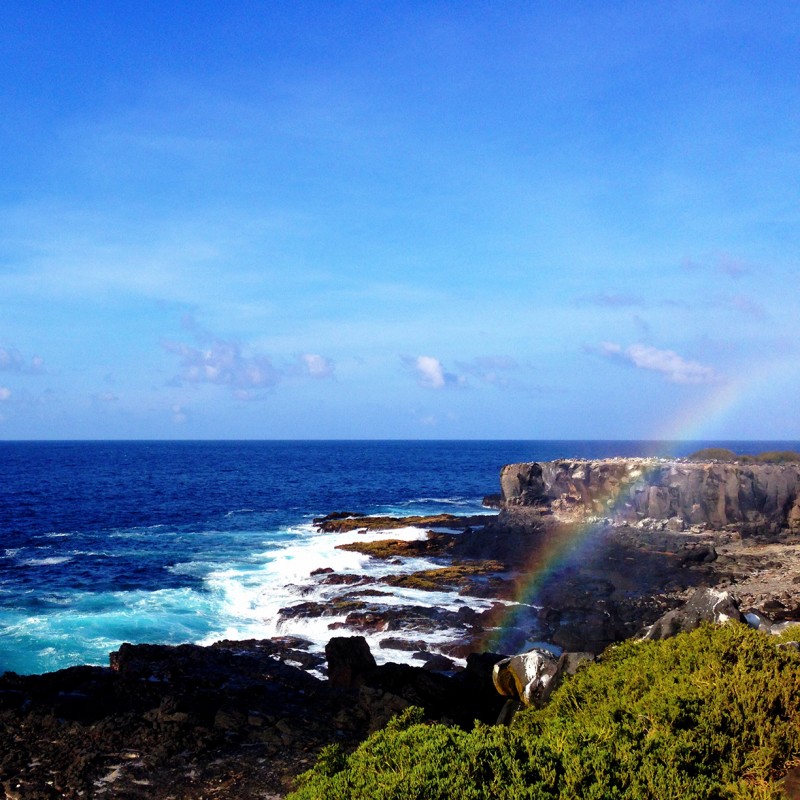 As one of the most protected ecological sanctuaries in the world the Galápagos Islands are extraordinarily clean. Still, the passengers from our cruise spent the early morning hours on Floreana Island combing the beach for random bits of trash to haul back to the ship. Every little bit helps … 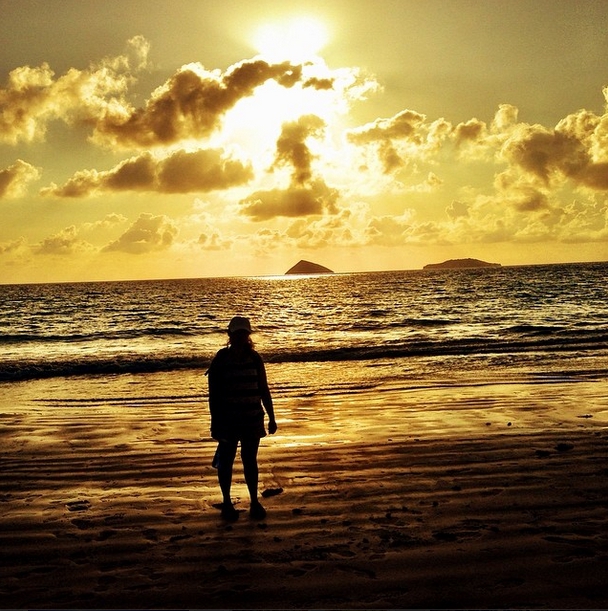 Of course, while combing the island beaches, it’s easy to uncover a wealth of rubbish, treasures and sea creatures (some living, some not) such as this tiny seahorse. 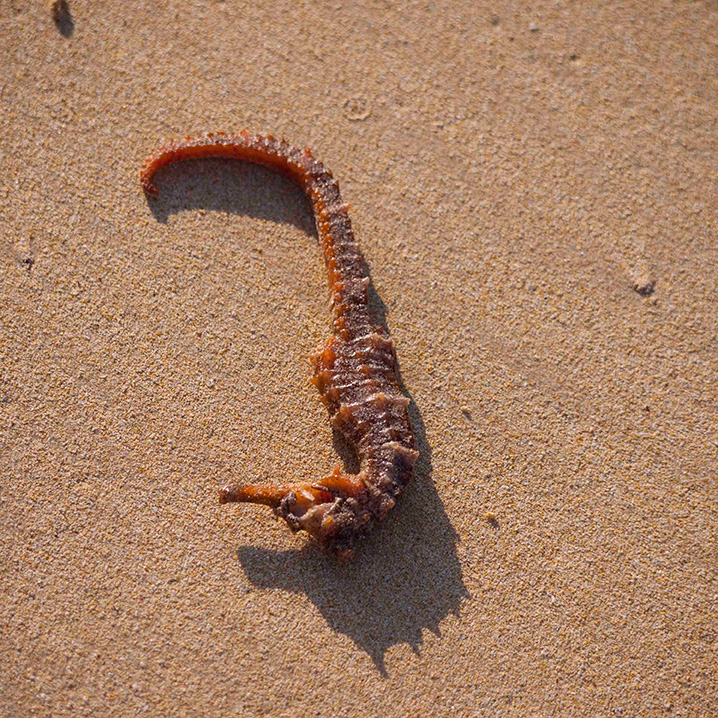 A great deal of time is spent in the Galapagos hoping for a rare giant tortoise sighting. Until a sign like this guarantees a glimpse! 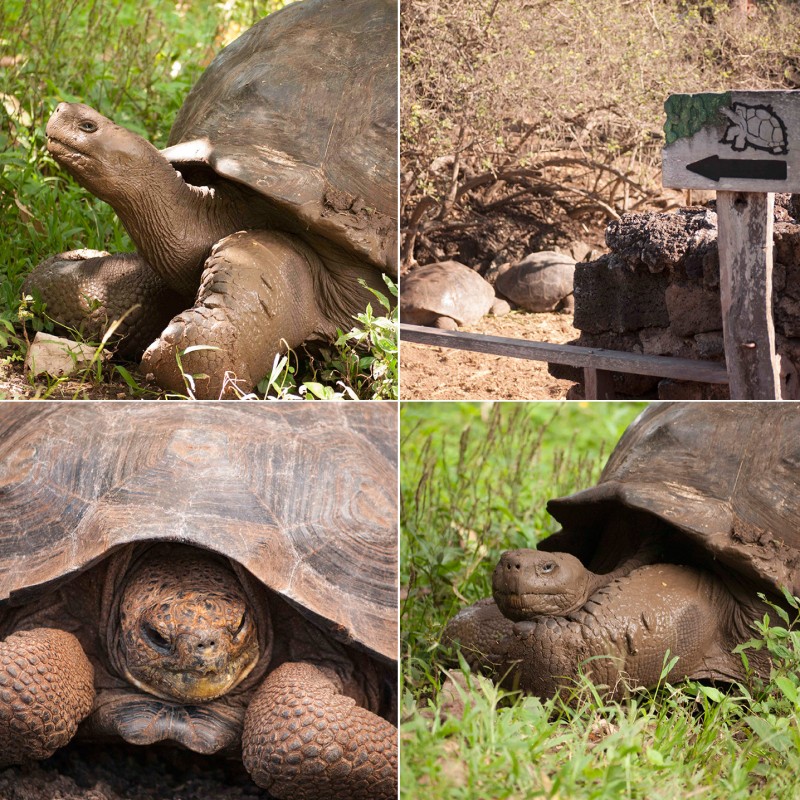 The Solitary, But “Affectionate” Marine Iguana

Iguanas as a species are solitary creatures and the marine iguanas of the Galapagos Islands are no different. As cold-blooded animals however, they rely on external heat sources to keep warm during the day. Large colonies can be seen haphazardly crawling all over and resting upon one another to maintain warmth especially at dawn and dusk. 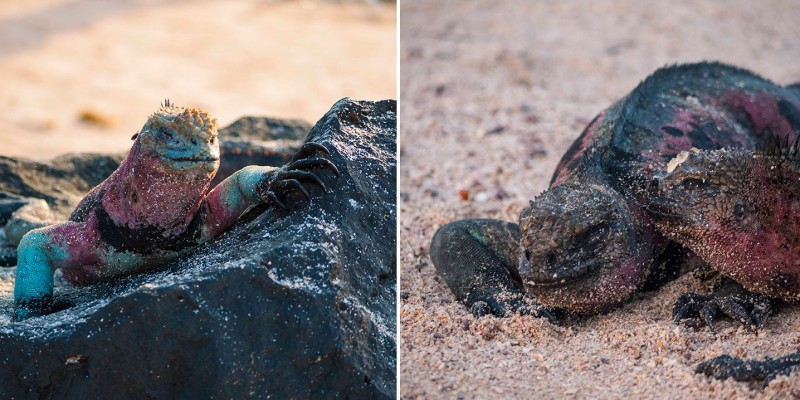 … and Their Not-so-distant Cousins, the Land Iguana 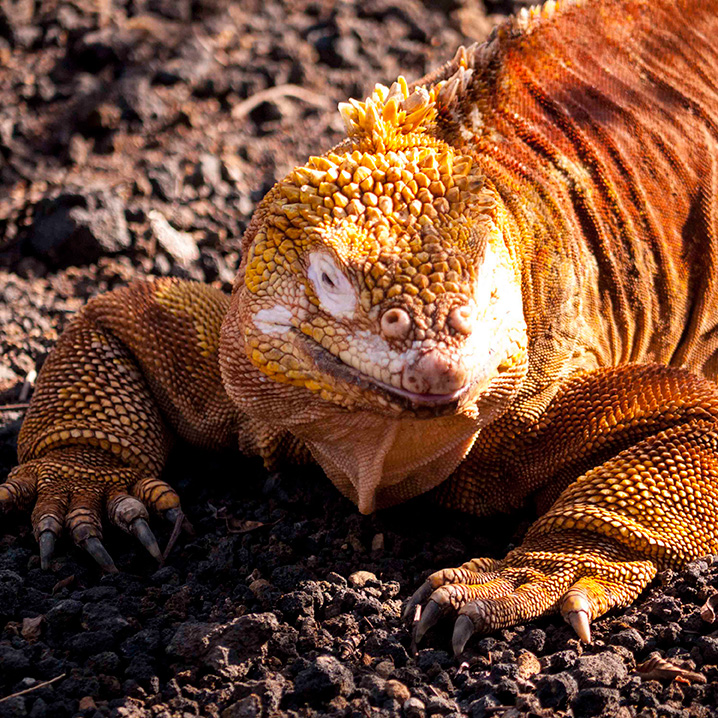 This small barrel has served as a marine post office of sorts for hundreds of years. Cruise passengers are invited to check for mail addressed to recipients near their hometown. They’re encouraged to take the mail with them and hand deliver it upon returning home. I was surprised that a post card addressed to my mother arrived in Florida in less than a month! That’s almost more efficient than the US Postal Service! 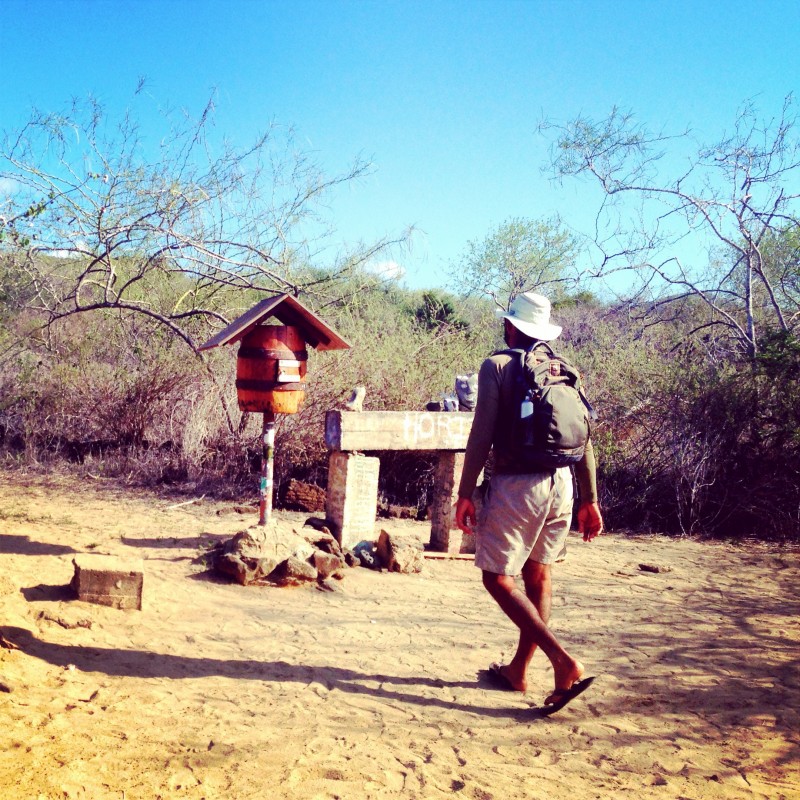 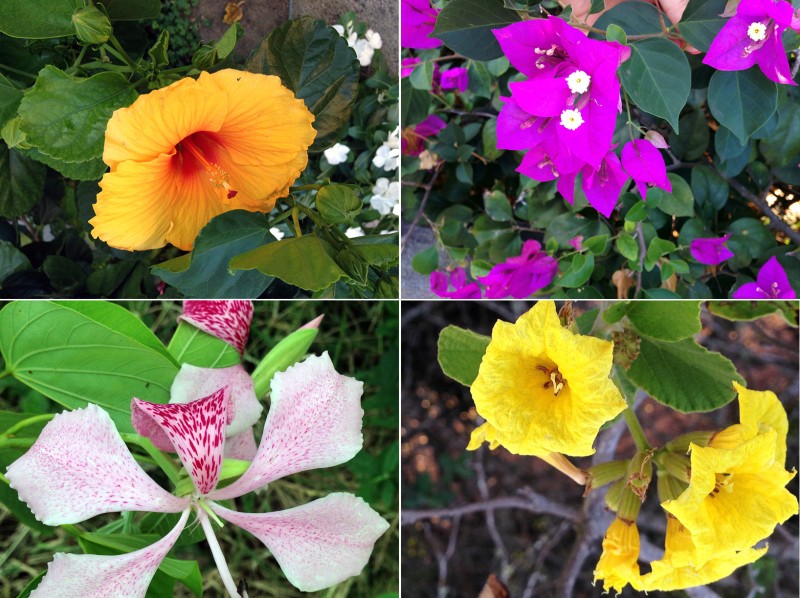 On Island Time: Relaxing on the Ecoventura Letty

After exploring the islands, a good deal of time is spent relaxing on the water. Every day ends with a bottle of Pilsener, good conversation with good company and the most spectacular sunset you’ve ever seen. 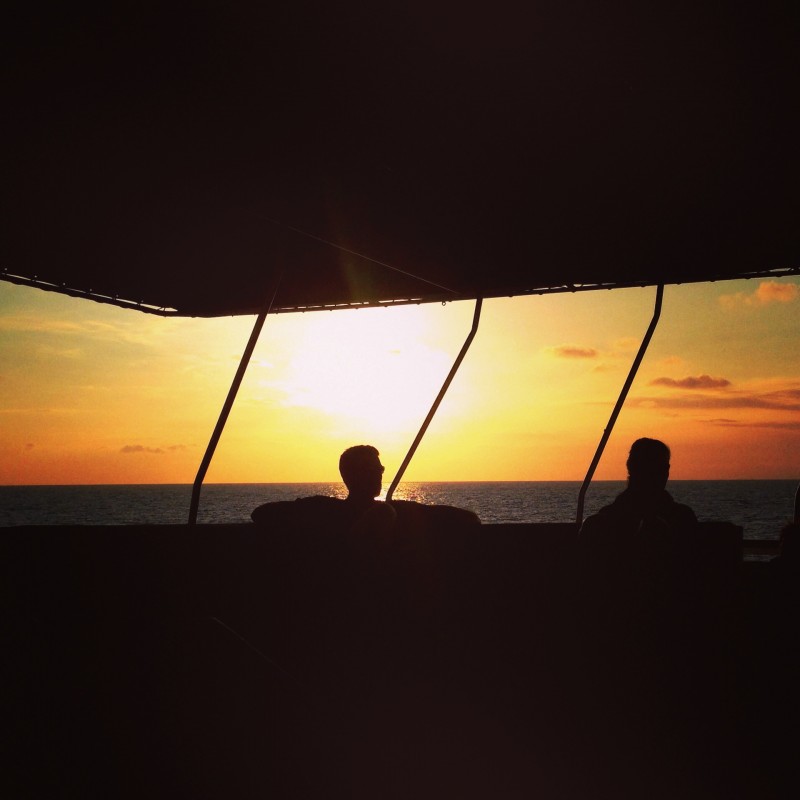 A Pelican Hovers Around Fisherman’s Wharf, Waiting for Errant Scraps in Puerto Ayora

Even on land, there’s no shortage of seabird colonies. Near the fisherman’s wharf in Puero Ayora, pelicans circle endlessly, hoping for errant scraps of fish bait from the day’s catch to be tossed into the water. 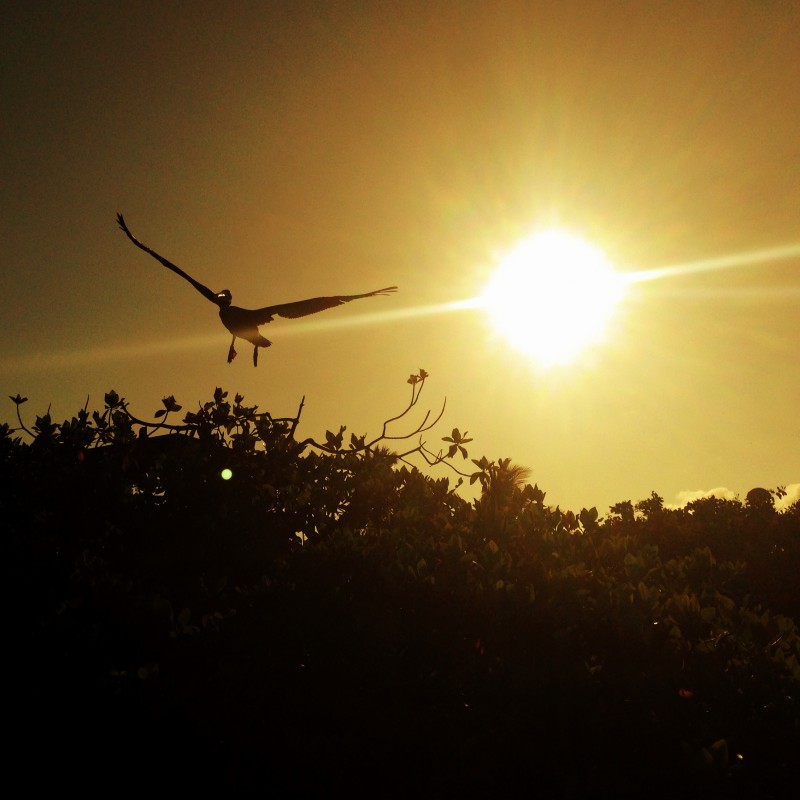 A Male Frigatebird Peacocking Hard for a Mate

Frigatebirds are among the most beautiful seabirds in the Galapagos Islands. During their annual breeding season, flocks of males wait patiently on the ground for love-seeking females to glide overhead. They fill their large, red gular sacs in an effort to draw the females to the ground. After several hours of showmanship, this successful male is taking a well-deserved break. His new mate is just out of frame, relaxing by his side. 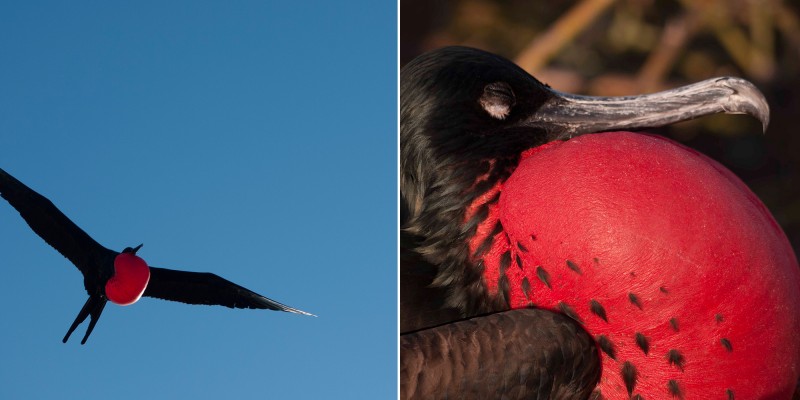 The Elaborate Mating Ritual of the Blue Footed Boobie

Frigatebirds may be the most beautiful, but the award for most fascinating goes to the blue footed boobie. At least when it comes to their mating ritual. The dance, which can last for several hours, involves the male attempting to impress the female with an elaborate combination of whistles, coos and foot and tail maneuvers. Some females (like the one below clearly looking away) are a bit harder to impress than others … 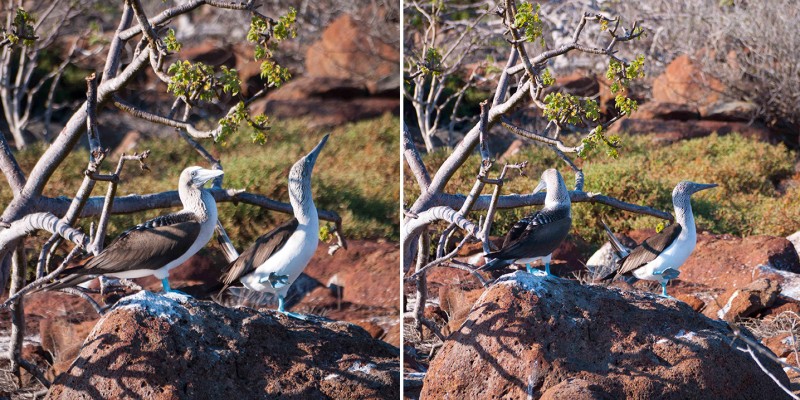 Another Day Ends in the Galapagos Islands

After a full week at sea, we were stunned to find every day’s sunset even more impressive than the one before it. The sky touches the water along every edge of the horizon as far as the eye can see. Day or night, it’s among the most pristine, crystal clear skies we’ve ever witnessed. 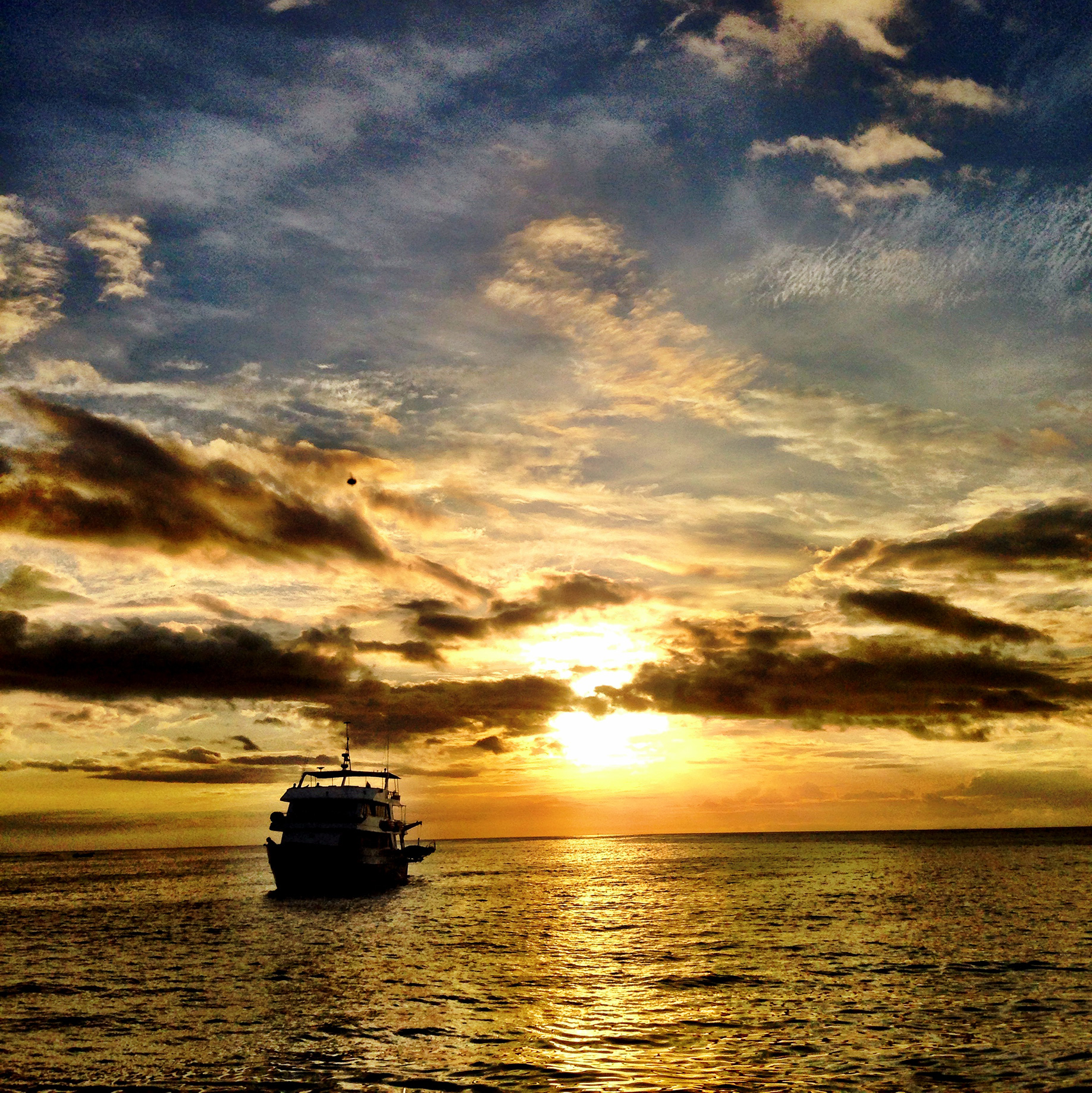