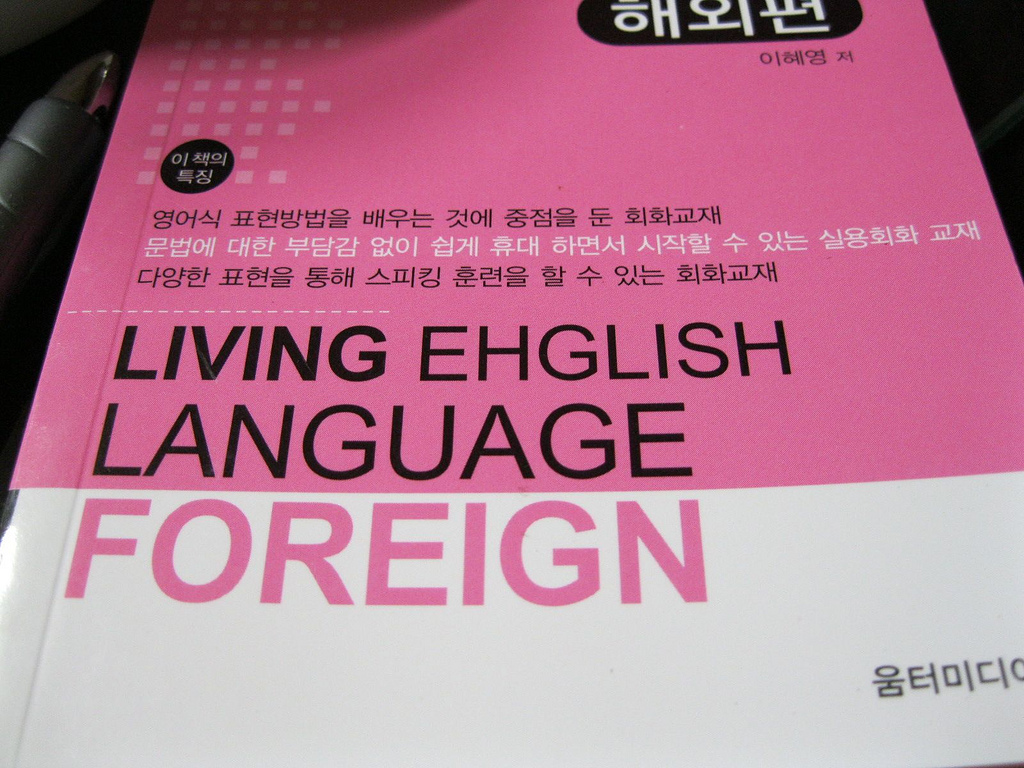 Jaded With The System: Insider Perspectives from an ESL Teacher in Asia

I’m sitting in a comfortable leather chair recently scavenged from the streets of Jukbyeon (ì¤”ë³€), South Korea. To my left: my friendly Australian Couchsurfing hosts, Brendan and Kate. Across from me, wearing her red TALK program shirt, is Young, a Korean citizen raised in the US who chose to take a break from university and rediscover life in her homeland. To my right is a couple who have both taught English in China and been in Korea for some time. I offer the Japanese perspective, and a little on Thailand.

Between us, we cover a sizable cross section of ESL teachers in Asia: some new to the game, some making it a career (or at least going for 4+ years), some just settling into a contract renewal; some at English academies (hagwon), some at public elementary schools. Despite our different backgrounds and teaching experiences, we’re quick to offer almost identical gripes about the system as a whole.

I’m not referring to contract disputes, problems dealing with cultural differences, or anything remotely personal. No, we’re all just rather numb to teaching. I know after you’ve been doing something — anything — for a long enough time you tend to act without thinking, going through the motions, using your brain in cruise control. This wasn’t entirely about that. It was more based on our observations of how though these kids have had English instruction for years, only a few out of hundreds or even thousands could speak the language with any spontaneity. Why? It’s true, not all of us had teaching experience prior to landing in Asia, but we still know our own language, and offer several teaching hours a day to these kids. Why is it so difficult for them to grasp at least some English? Maybe I’m being too hard on them, or downplaying just how difficult English really is.

In Korean and Japanese, there are fixed sounds for each written character: i.e. one vowel sounds the same regardless of the word being used. But this doesn’t change the fact that little progress is being made. Arudou Debito, a human rights activist in Japan, recently defended the JET Programme and addressed at least part of this issue:

”¦ what are JET teachers here to do? Teach a language? The majority of JETs aren’t formally trained to be language teachers, and even if they were, it’s unclear what they should be doing in class because ”” and I quote JET officials ”” “every situation is different.” Exchange culture? Uhh . . . where to start?

Exactly. For the three countries in which I’ve taught English as a second language, the goal does not seem to be actually getting the students to learn. In most cases, it’s simply getting through the curriculum, right or wrong. If that happens to include English that isn’t practical, or follow a lesson plan that will only allow students to repeat a few key phrases, so what? There was never much of a mission statement in the first place, so the school’s obligation is fulfilled, and the teacher finishes his or her year.

Secondary to that (and not always the case, for younger students) is passing exams. High TOEIC and TOEFL scores are useful for university admissions and job applications. But, like the American SATs, the only thing students learn is how to take the test, not necessarily the material it focuses on.

Let’s go back to the teachers. With the world economy fluctuating and many graduates and the unemployed seeking alternatives to minimum wage in their countries, the idea of teaching English abroad is billed as an exciting adventure. Search any city’s Craigslist for “teach asia” and see what comes up:

IF YOU LIKE TO TEACH ENG WHILE TRAV ASIA?

Notice anything? The first selling points are travel and “no experience required”. Well, guess what, Asia? You get what you ask for. Travelers. I doubt more than 5% of the native speakers who go abroad are committed to teaching, in that they have a reasonable amount of experience, and they actually try to get the kids to learn. A rarity. Instead, they (we, rather) focus efforts on the next weekend trip, the next vacation, the walk around their Beijing neighborhood, the exciting chance to learn a language in the country of origin. That’s all well and good for the teachers, but what of the students? If men and women’s passions aren’t in educating these kids, progress will be slow, to say the least.

Why take the time to print pictures, cut and paste, write a conversation poster? There’s sleep to be had, food to be eaten, things to buy. Teaching is lowest on the priority list. Sad, but true. Even if some workers are a little more dedicated than others, I doubt they’ll say this fits into their career path and they want to do a good job to get a good reference. More like just making things smoother in this interim period abroad. Secondly, the way students are taught in Asia (with some exceptions) is incredibly inefficient. Of course, kids learn the basics like the alphabet, days of the week, and numbers. But after that, it’s kind of a leap. The focus isn’t on grammar or building a foundation, it’s repetition and vocabulary. Brendan, the Australian working in Jukbyeon, put it rather well: “They learn phrases as vocabulary.”

If you haven’t taught ESL or learned a language before, this might be a little confusing. For adults who are living abroad and don’t have time to take language schools, I can understand them having the maturity and building their vocabulary word-by-word, phrase-by-phrase. But these are kids, and they’re given only one choice: this is how you speak English.

Take the example “This is a pen/map/pencil/desk”. My youngest class will yell this at the top of their lungs because it’s simple enough to remember and pronounce. But it’s like they see it as one word: “thisisapen”. The verb doesn’t exist. The article doesn’t exist. The noun and pronoun? You guessed it. I didn’t understand the mental block some students had when using a similar phrase – “this is my pen” – until I realized none of them had the knowledge to break this sentence down.

This was true even of my twelve and thirteen year olds who struggle with English structure (having taken ESL for years). Repetition may be necessary for new vocabulary, but no one learns anything about the language as a whole, just one word.

Thirdly is the attitude students have towards foreign teachers. Often, many students, especially in rural parts of Asia, have never seen a white or black face, and can’t help not taking “it” seriously as a teacher. In Japan, I did feel like more of a trained monkey than an educator, the way the children and staff reacted to my presence. When recruiters bring in inexperienced newbies with no knowledge of the language, students pick up on it right away; they know foreign teachers can’t understand them and usually won’t hesitate to goof off, curse, or just not pay attention. The time with the foreign teacher is “Fun time! Yay!” The time with the “real teacher” is for learning English. No matter how hard local teachers try, they will never get students to behave the same way for both class times.

” ”¦ you have been in Japan for a long time. Perhaps you forget your English.”

Fourthly, local educators seldom take advantage of native English speakers. Even if their minds are focused on places to travel or exotic singles to bed, the fact remains that they’re here, and they do know how to speak their own language.

This is a bit of a generalization. I have known Japanese teachers who used their foreign teachers to their fullest potential, always asking for their input and complicated grammar questions. But, more often than not, foreigners are simply pointed in the right direction and told when to speak. Even those who do have the freedom to teach classes by themselves are given a curriculum to follow, and may be subject to observation and criticism; this is fine to a degree, but sometimes local teachers just don’t have a clue what they’re talking about – how can we, as native speakers, expect to heed their advice on a lesson when we’ve heard them make that particular grammar mistake?

All over Asia, foreign instructors have far too much idle time at schools, just sitting there and using the internet, waiting for someone to ask for advice or help with a class. I’m not mentioning this to complain about the treatment of foreign instructors – I’ll save that for another article – but just to illustrate that the system is flawed in not taking advantage of a great educational resource: us.

The flip side to all of this, as I’m sure you’re aware, is that it’s good to have inexperienced, somewhat-ignorant people living abroad ”¦ well, assuming they’re open-minded. But it is not advantageous to the ESL system as a whole.

Teaching English is often the only means some have to live abroad long-term. By creating no requirements other than a university degree and citizenship of an English-speaking country, recruiters have opened the floodgates to those in their gap years, those looking for a change or an escape, and those who just really need the money. I can’t seriously believe they’re only looking for those intending to educate; if so, they’re simply incompetent. If companies or government-sponsored programs were to just take a stand and say “we only want those devoted to teaching who have one year’s experience in a real school”, the numbers would thin considerably. But the teachers they hire might actually accomplish something.

The system isn’t perfect, but it is better than leaving all these educated people in their home countries. Right now, they benefit from the experience, and ESL programs benefit by just showing the face of English speakers: “We must teach you something here at English Right Now! After all, we have a genuine, mint-in-the-box Canadian!” And I suppose that’s a big part of it, in Korean and Japanese culture: showing you’re making the effort, even if it doesn’t produce anything tangible.

Recruiters may spend thousands of US dollars searching the world, finding a suitable candidate, interviewing her, flying her over, setting her up in a company apartment, advancing her salary, only to find she hates children and just needs the work. But the school can say they have a native English speaker on staff, and that’s sure to bring results. Right?