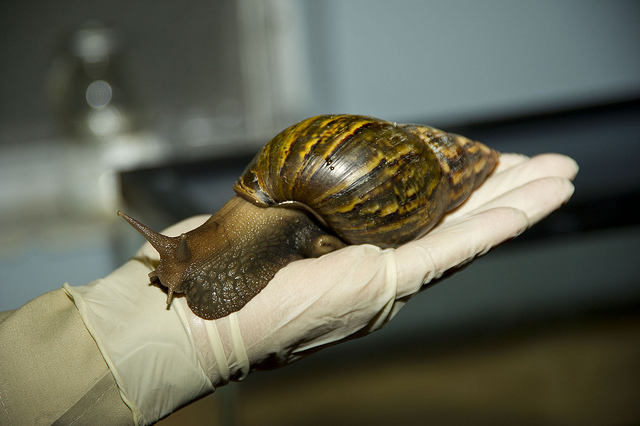 It sounds like the plot of an ill-concieved comic book or low rent science fiction. Giant snails, as big as rats, have invaded Florida and are eating whatever’s in their path. Who will save the Sunshine State from these marauding molluscs?

Apparently the giant African land snail is the world’s most destructive invasive species. It eats every green thing it comes across and will even eat stucco and plaster. South Florida is experiencing an infestation of epic proportions. So far 117,000 of the unwelcome visitors have been caught since they were first spotted in the state in 2011. More than 1,000 are caught every week in the Miami-Dade area.

The snails’ appetite is not the only threat they pose. They release (and by “release” I mean poop) slime on pavements, creating a slippery mess that poses a hazard to pedestrians. Their shells can blow out a vehicle’s tire if you run over one, and if run over by a lawnmower the shells become dangerously sharp projectiles.

An urgent African Land Snail Science Symposium has been convened in Galveston to prepare a counterattack against the invaders. Check out ore about this in The Toronto Star