Eighth Wonder of the World: Underground Temples of Damanhur

Buried deep underground in the valley of Valchiusella in the Italian Alps lies a secret so stunning the Italian government has dubbed it the “Eighth wonder of the world.” Unlike the other seven wonders however, this one isn’t centuries old. In fact, until a few years ago, few were even aware of its existence.

More than a hundred feet below the hillside lay nine splendid temples whose beauty, depth and detail have left witnesses spellbound. The temples were the brain child of Oberto Airaudi, an insurance broker who claimed since he was a child to have had visions of a fabled land full of beautiful ornate temples where people lived in harmony. Drawing inspiration from these visions and from his ability to travel back in his mind to record the details of each temple in his vision, Airaudi set about putting his dreams into stone and mortar.

In 1977, Airaudi and a group of friends selected the hillside as the venue for their project and secretly began the process of excavation into the hillside. Using nothing but hammers and chisels, the motley group worked away creating glass ceilings, stunning murals, columns and stained glass windows, each one unique and magnificent in its own way, and all the while guided by Airaudi’s visions. 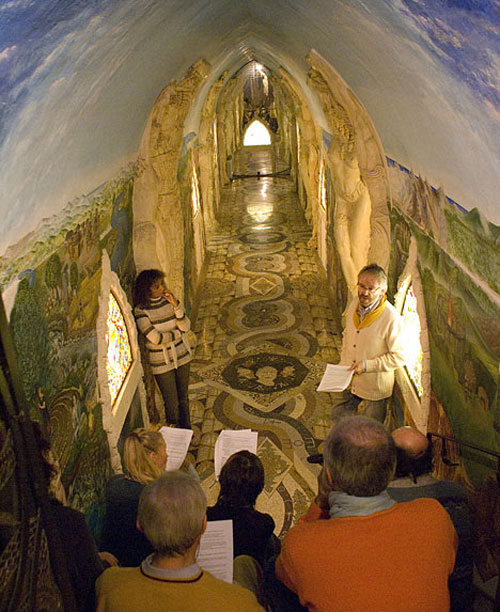 By 1991, the secret was out and the cops demanded to be let in to the secret chambers. Astounded by what they saw, the government immediately seized the property. The Damanhurians – as those involved in the project call themselves – have since formed a veritable community of their own with eco-friendly homes, bakeries, organic supermarkets and vineyards in the region.

And what was the purpose of the project? According to Falco, it was to remind humanity that we are all capable of much more then we realize, if only we allow ourselves to act on our potential.

Read the full story and view the photo gallery at Daily Mail.