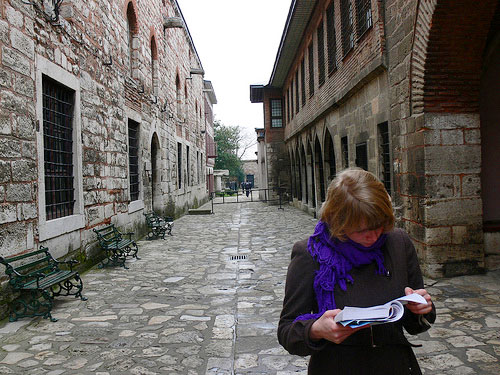 Could Thomas Kohnstamm Save Travel Writing?

Simon Sellars is a veteran Lonely Planet writer whose work with the company has taken him everywhere from the Netherlands to Micronesia to Japan to that quirky little principality of Sealand. He’s been prodded by members of the TSA, snubbed by hotel concierges, gone without significant amounts of sleep to get from Saipan to Yap, and probably veered into Yellow Wallpaper territory when attempting to differentiate between different chains of Guam hotels that all happened to use the exact same flowered bedspreads.

And Simon Sellars has also been to each of the places he’s covered. Has his four years with LP left him jaded towards the travel writing industry? Sure. “Let’s be realistic,” he told TravelHappy San Francisco Chronicle (updated) in January of this year.

It’s more a case of being paid to collect brochures and bus timetable info””and to crack the ice-cold nerve of concierges the world over. We are info dumps: much of the job is gathering facts and figures and updating perishable and non-perishable information.

Lonely Planet’s policy of paying guidebook authors in a lump-sum, one that will shift depending on how frugal you are with your time and travel expenses, can make such a project either a significant addition to your W2s at the end of the year, or a budget deficit that was supplemented by a trip (not, I may add, a vacation) and a byline. 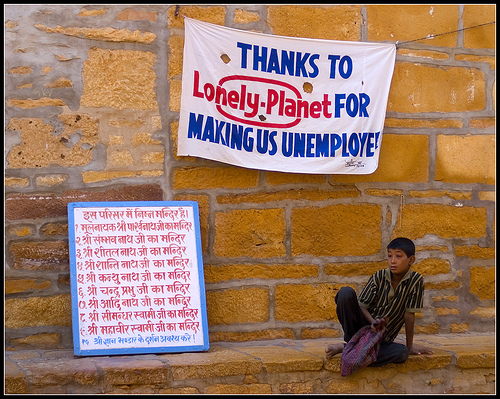 Those who want to be Pico Iyer or Alain de Boitton will, however, find themselves faced with the cold hard truth, as ironically outlined by supposedly fraudulent writer Thomas Kohnstamm earlier this week. His diatribes, left on nearly every available comment box on e-articles relaying the news of his “confession” that he never went to Colombia to research his guidebook on the country for Lonely Planet (among other counts) played the poor writer card to the hilt, including supposed death threats, a lack of financial support from the corporate Ebeneezers (WGA, anyone?), and the glaring revelation that travel writing is, in fact, work.

It’s ironic to note that, nearly two years ago, Kohnstamm was featured in the news as a travel writer for a slightly different reason. Warren St. John’s New York Times article (A Job With Travel but No Vacation) starts with a personal anecdote from Kohnstamm’s trip to Caracas, Venezuela, in which the author (again on assignment for LP) was pistol-whipped and robbed in the Sabana Grande neighborhood. Those of you who own this guidebook will note the following from the Dangers & Annoyances section: “Caracas has some well-known issues with petty crime, robbery and armed assaults. These problems are not just hype and should be taken very seriously.”

At least he was doing his job then.

Where Kohnstamm fell short is actually where Lonely Planet (and a few of its guidebook compatriots) fell short. Both tried to keep up with trends and the demands of a contemporary digital age, and both produced artificial and shallow products.

Both Kohnstamm and Lonely Planet tried to keep up with the demands of a contemporary digital age, and both produced artificial and shallow products.

(aff), the story of LP from the first trip made by a pair of crazy and curious newlyweds to its rise as a travel conglomerate. And it was a sad read. For a company that started off with so much promise, a grassroots “yes we can” esprit that started a travel zeitgeist, it is now an inauthentic and often inaccurate travel resource for those of us too young and too flippant for Fodors or DK. Yet I’ve spent enough time getting lost thanks to inaccurate maps, going to museums that have long since closed, and finding hostels and hotels that were way beyond the specified price range to take the series seriously anymore. Remember when your parents said to you “I’m not mad, I’m disappointed” and that hurt even more? That’s how I’ve begun to feel towards several guidebooks.

And while other travel writers will agree that Lonely Planet is one of the worst offenders, they are not solely at fault. I spent a night in a Pisa train station, struggling to keep my eyelids from dropping so as to have some illusion of defense as a solo female traveler with a laptop thanks to Let’s Go. In Budapest, I was faced with a bar that Time Out (via one of the bartenders, supposedly) described as “2:00 am crazy, 4:00 am cool, 6:00 am breakfast, 8:00 am ‘Hello, I love you.'” Yet by 11:00 pm the bar was closing and my guidebook (which had only hit bookstores two days before) seemed as out of date as a blue Pioneers scarf in contemporary Alexanderplatz.

Of course, as Chuck Thompson points out in his blitzkrieg expose of the travel writing world, Smile When You’re Lying: Confessions of a Rogue Travel Writer

(aff), this is more or less a case of getting what you pay for. Every travel writer will tell you the same thing: they’re not in it for the money. In fact, if they’re anything like me, they’ve been transferring credit card debt to keep their APR at 0%, their bank accounts are so overdrawn their practically photographic, and they’re working on less sleep than the average CEO to earn their $50.00 a blog post and $1.00 a word. Occasionally, they even see their pitches, once rejected by a magazine, become that same rag’s cover story written by an author in-house (re: no extra fees for the publisher to pay to a freelancer).

Meanwhile, ad reps probably drive themselves just as batty (remember the flick In Good Company?) but at least make a proportionate salary. It is, as Thompson says, not a case of advertisers being overpaid, it’s a case of writers and editors being underpaid. The revenue of a major publisher is now mostly siphoned into garnering more income, and that is generally not predicated upon hiking up a writer’s salary. It’s predicated upon having a competitive advantage.

So where does that leave our Mr. Kohnstamm? In his comment to Eva Holland’s astute piece on Brave New Traveler, he writes “I am trying to write a book about the truth in travel writing.” Yet, as we’ve just seen, that was already taken care of by Chuck Thompson (conspiracy theorists, take note that each author features “Thom” in either their first or last name).

Like his employer, Kohnstamm sought a competitive advantage by upping the travel writer “bad boy” factor. Step aside, Chuck. Take a back seat, Anthony Bourdain. Even a lad-lit auteur like Geoff Dyer (who regularly owns up to taking drugs while traveling, even when traveling on writing assignment) will seem ho-hum in comparison. 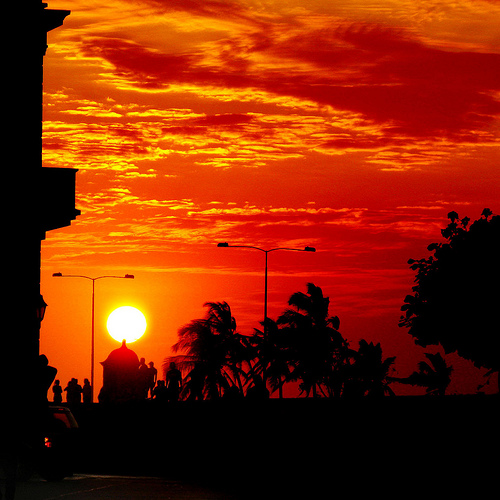 Over at Gadling, Aaron Hotfelder revealed that Kohnstamm was not responsible for writing the whole of the Colombia guidebook, rather just the history, environment, food and drink, and culture sections. Moreover, he and Lonely Planet agreed that he wouldn’t need to travel to Colombia for these parts. It seems the greatest lie that Kohnstamm told here was when he said: “They didn’t pay me enough to go (to) Colombia. I wrote the book in San Francisco. I got the information from a chick I was dating-an intern in the Colombian Consulate.”

And that isn’t even a lie; it’s just a manipulation of the truth. Kohnstamm has taken the travel blogosphere to task for its espousal of journalistic integrity. Not a small claim. Now, however, he is also calling his initial comments “an unfortunate choice of words.” Not a small claim, either.

It’s hard selling a work””particularly an expose””when a similar work broke ground merely a few months earlier. Sometimes the underdog comes out on top””Rossini’s opera Il Barbiere di Siviglia (better known to most of us as The Barber of Seville) was based on the same Beaumarchais text as composer (and contemporary) Paisiello. Paisiello’s students sabotaged the world premiere of Rossini’s piece and its opening night was deemed a fiasco. Sickened by the news and reception, Rossini took to bed and missed the second night which was a triumph. And which one did Bugs Bunny parody centuries later? Rossini.

Kohnstamm, however, has clearly not made too many friends with this press frenzy. Has he influenced people? Remains to be seen. But a Google search on “Thomas Kohnstamm” now yields 33,100 hits and a search on his book title, “Do Travel Writers Go to Hell?” yields 230,000 hits. Similarly, Google “Smile When You’re Lying” and you’ll come up with 577,000 hits.

We may find ourselves reluctant to blindly and blithely purchase a guidebook off the shelves without ensuring credibility.

It may be twice the amount of hits than the un-published contender, but we’ll certainly know the difference between the two now. And we may also find ourselves reluctant to blindly and blithely purchase a guidebook off the shelves without ensuring credibility. And, perhaps because of that, publishers will soon begin to feel the push towards their own heightened journalistic integrity.