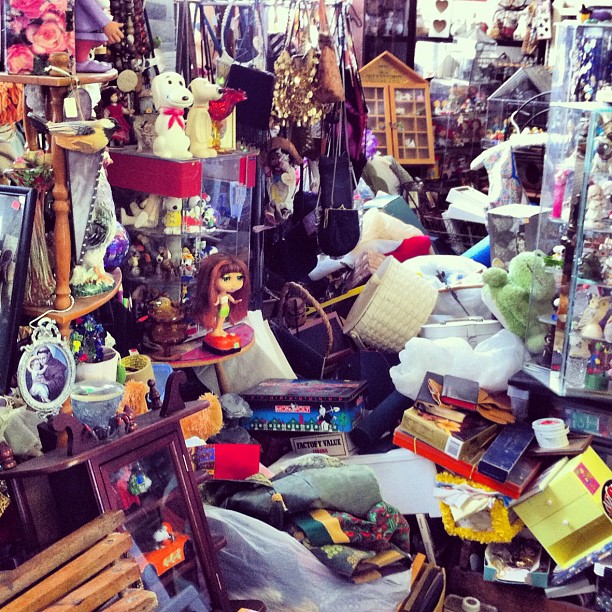 Confessions of a Traveling Packrat

I’ll admit it: I like stuff. Whether it’s travel gear or books or purses or ceramic bowls, I like having stuff around. I have a ridiculous capacity to remember who gave me things, or where I got them, which makes it all too easy to assign emotional significance to inanimate objects. Where others have scrapbooks, I have “scrapboxes,” moved from house to house since high school and rarely opened.

I am, quite simply, a packrat.

Many of the travelers I know are minimalists – some can (and do) fit everything they own into just a backpack or two. There’s a part of me that longs for that kind of pared-down nomadic ethos, but I know I’m probably not capable of emulating it. What’s more, over the years I’ve come to find that some of my packrat tendencies actually serve a travel purpose.

(Either that, or I’m totally rationalizing. Whatever. Just don’t call that damned “Hoarders” show.)

Here are a few examples of things I keep when I’m traveling, and how I talk a good game when it comes to explaining why.

The Plastic Bags of Europe 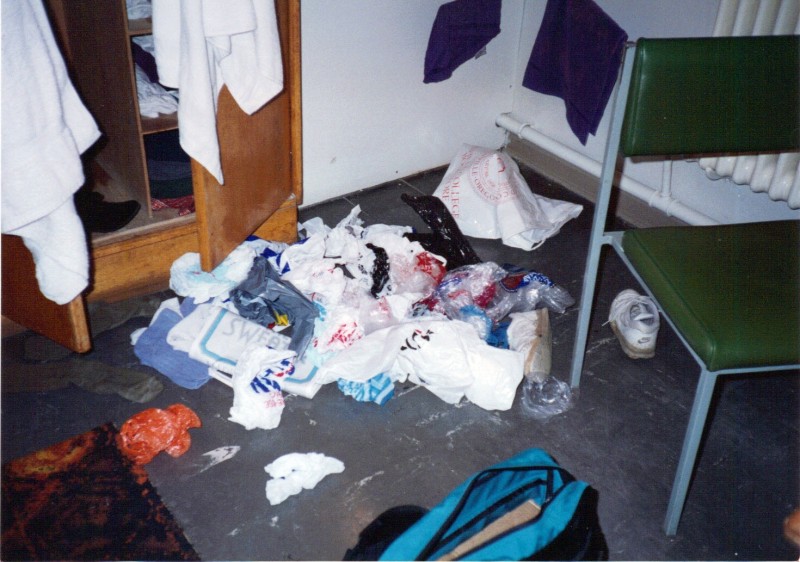 During my four-month stint studying at Nottingham Trent University in my junior year of college, I had the good fortune to not only explore much of England but visit family in Europe, too. I got lost in Paris trying to find cousin Françoise’s bakery, I spent four days in Prague with my step-first-cousin Ruth in an apartment in which the hot water didn’t work, and I took the train around Switzerland following Aunt Vicky’s itinerary.

I did a fair bit of shopping during those four months – for groceries, clothing, and souvenirs – and when I was packing to return to Oregon at the end of the term I realized I’d kept every plastic bag from every single purchase I’d made. The pile was notable enough to warrant a photograph.

That semester is too far in my rear-view mirror for me to recall what became of all of those bags, but I’m pretty confident I know what happened to at least some of them – because my habit of accumulating plastic bags when I travel hasn’t diminished. Nowadays, bags like that are put to good use – for common traveler stuff like dirty laundry and shoes, and also for things the travel writer in me insists on picking up: brochures, business cards, and other travel literature. On a trip to Italy one year I came home with each city’s informational papers in a different bag, separated and ready for filing.

The Oregon-environmentalist in me now carries a couple of reusable bags when I travel, so I don’t acquire as many plastic bags as I once did, but the bags I do end up with still get used – and when I pick up a plastic bag full of tourist literature months after my return, foreign writing on the front of the bag makes the mundane task of filing feel a touch more worldly. 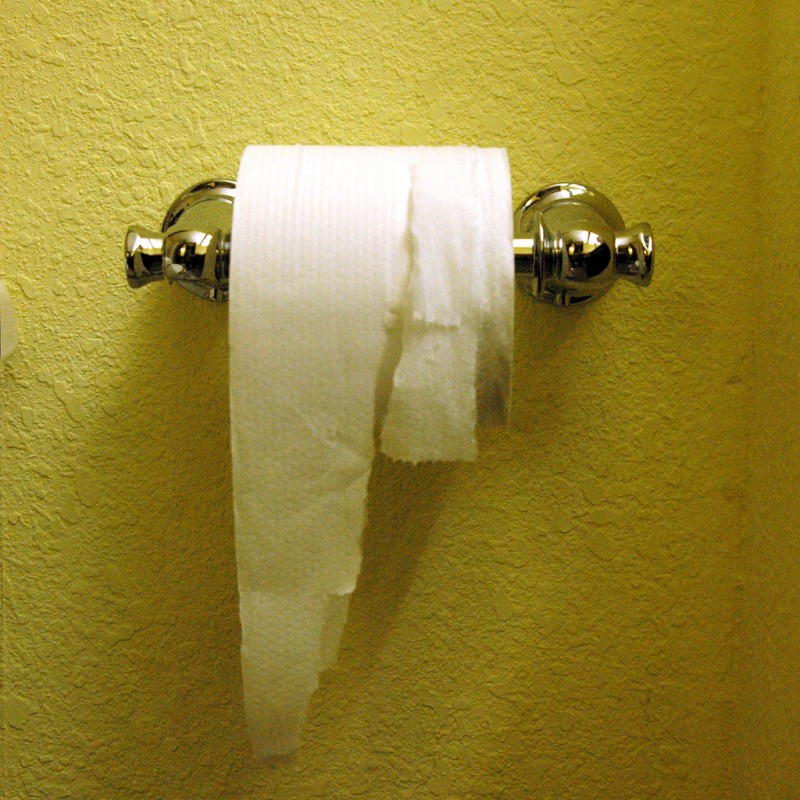 I came up with the idea of collecting toilet paper in Canterbury, during my first month studying in England, and followed through with it for the whole of my semester abroad. In every bathroom stall, I’d tear off an extra square of the toilet paper and tuck it into my purse – and then, later, into my journal (those were paper books we old folks used to tote around and write in, kids, way back before there was a series of tubes).

Looking back through my photo albums from that semester, all of the squares are there – among them, the pink square with the red “DB” stamp from the German train I rode to Prague, the oatmeal-colored square that I don’t have to touch to remember how like streamers the toilet paper was in the Nottingham dorm, and the non-descript square that remains one of the highlights of the collection because it’s from the loo at the top of the Eiffel Tower.

My TP-collecting days ended with that trip, but if you were to open any of my purses today you’d find my modern replacement – paper napkins. Finding myself in a toilet in the south of France once with no paper in the dispenser and no tissue pack in my purse traumatized me for life, apparently, because now I’ve got a “no paper napkin left behind” mentality. It’s purely a practical thing, and yet it’s become so much more.

Emptying my favored travel purse onto the dining room table in preparation for another trip, I recently found a napkin emblazoned with an image of the Milan Duomo and the name of the panzerotto shop two blocks from the iconic cathedral. It had been at least a year, maybe two, since I ate a panzerotto there, but absent-mindedly shoving the unused napkin into my purse meant that I was standing at my dining room table all those months later and salivating for the flavor of chewy, slightly-sweetened pockets of dough filled with melted mozarella cheese and fresh tomato sauce.

Luckily, I had a paper napkin handy to clean up after myself. 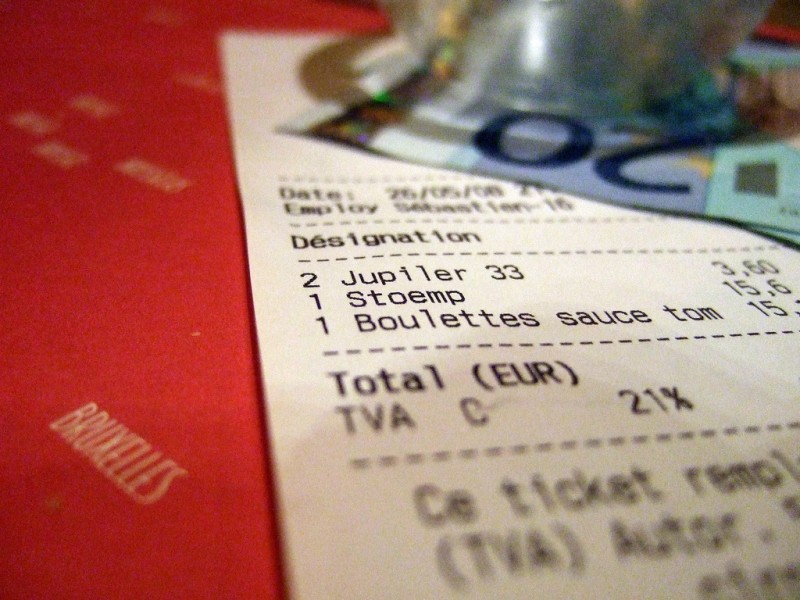 The regularity with which I save receipts, both at home and when I travel, might lead you to believe I keep careful track of expenditures. (I don’t.) Receipts get saved nonetheless, stuffed into my beleagured handbags (alongside the paper napkins), and unceremoniously dumped into piles of tiny paper scraps when I’m finally fed up with not being able to find my actual wallet anymore.

Certainly, in some cases those receipts are kept in a more organized fashion so that I can figure out business expenses after a trip or if I’m not quite sure I’ll keep that pair of shoes I just bought. More often than not, however, receipts collected during my travels end up in the “to be shredded” bag in my office. I glance at them before sending them to their cross-cut demise, but often foreign receipts are no more than a series of purchase prices and a grand total printed in ink from an old-fashioned cash register. Sometimes there’s a date, sometimes there’s a city, but the shop or restaurant isn’t always named.

Then every so often I pick up a clearly-marked receipt and do a double-take, like I did just a few months ago when I found a receipt from drinks I bought at Snug Harbor during an April visit to New Orleans. The din of the shredder faded into the background and I was sitting in the second row of the famous jazz club on Frenchman Street, knees pressed against the wooden chair in front of me for the lack of legroom, the sound of Ellis Marsalis on the piano filling my ears.

I was grinning stupidly, that night and again sitting in front of my shredder, and I set that receipt aside. It’s now serving as a bookmark. The ink is fading and the thin paper is getting thinner, so eventually I know it’ll probably disintegrate, but for now it’s making that one-hour set at Snug Harbor – as well as the gin & tonic for which I got the receipt in the first place – last for much longer.