In Defense of Cardiff, Wales: It’s Not That Boring!

“Why are you going there?!” was the question I kept getting asked.

“Because!” was my weak response. Apparently, people saw Cardiff as a waste of time. The common song was that there is nothing to do there besides a visit to the castle, which compared to other European castles … ummm … seemed to validate their argument.

Ever since my sister and her hubby visited over a year ago, I’d been itching to go check it out myself. “But why?!” she asks. I roll my eyes nonchalantly. I refuse to believe it is that mundane. 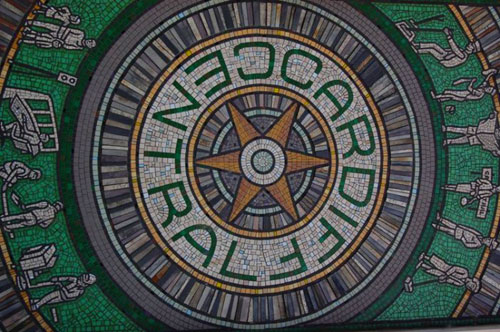 So when my train rolled into Cardiff Centrale around 7pm, my first plan of attack was to check into my hostel – Nosda, catch a nap, and then go sample its nightlife to get a good feel of the city’s pulse. It was a brisk 10 minute walk from the train station to my hostel along the banks of the Taff river.

I observe the locals as I stroll along – a smallish, disheveled woman no taller than 5 ft, talking to herself as she scurried along, a youngster riding along the bike path, a guy staring out the window of one of the row houses along the waterfront, with music blasting in the background. So far, it seemed like your normal small town.

“Where’s a good place to grab a decent dinner … and maybe a drink or two?” I ask the lady at the desk. She has dark hair and blue eyes – very Welsh. She pulls out a map, and after she marks a series of X’s and O’s all over it, the rest of my plan is mapped out for me. I was to go to Mary Street.

I finally head out towards the pub row, wandering aimlessly. I stumble across the Yard – a collection of restaurants and pubs and … discos? I gravitate towards the sound, descending down a flight of stairs into a basement-like courtyard. There’s a bar/club playing everything from Whitney Houston dance remixes to more current tracks like Timbaland, with a few house and techno beats thrown in. It’s trying to be everything to everyone which means you get a truly mixed crowd. I grab dinner at the Mexican restaurant next door, sitting out on its patio so I could study every soul that ventured in and out of that lounge.

Finally making it into the lounge, I buy a Smirnoff Ice because, drinking-wise, my bark is louder than my bite. I survey the dance floor, a cornucopia of diversity: businessmen still in suits, kittens and cougars alike in clothes too tight for their ages, a womens hockey team still in skirts, knee high socks, and trainers, a couple gay guys strutting and shaking oblivious to everyone else, your typical guys looking to pick up chicks, your travelers, your locals, everyone. Each group stands still until their type of music is played and then they dance like crazy. Amused, I attempt to move to every style of music played. My natural rhythm is challenged.

I meet Paul. He has the same dark hair and blue eyes I had seen earlier. “Nu one ear has gut any rhydim!” he observes as he gyrates off-tempo to the beats. “Of course they don’t,” I agree with a smile. “This coming from a guy dancing with two fingers pointing to the ceiling!”. His mischievous laugh reaches his eyes. We instantly become friends.

So when the lounge closes at 2am, I get the night tour of Cardiff from Paul. She is a pretty sight to behold at night with little to no life. Her dark castle instantly transports you to medieval times. “Er wish yu woe here much lunger”, he is bummed as he walks me to my hostel. His sentiment is shared. 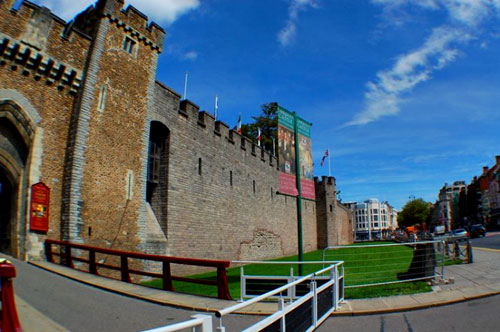 I hitch a ride on a tour bus to the bay. A bona-fide traveler never admits to anything remotely touristy.

When the sun rises, I skip towards the castle with camera in tow. I had bought a $40 attachable fisheye lens from eBay so I was ready to goof around its grounds irreverently. I walk in, spot Norman’s Keep, and the crazy tourist emerges as I turn click-happy. The fisheye does add character to boring pictures. I harass strangers for pictures, I rush up the steep stairs of the keep to take artsy-fartsy shots, I chase the peacocks round the grounds trying to take fancy shots. I amuse myself at the castle. I hitch a ride on a tour bus to the bay. A bona-fide traveler never admits to anything remotely touristy.

I make it down to Cardiff Bay and Mermaid Quay. I spot two little Welsh boys. They are instantly drawn to me. “Where yu from? Why yu here? Where yu goin’?”. I try to take pictures of the scenery, they jump into every shot. I am intrigued by them.

Cardiff Bay is your typical pier town with lots of shops, outdoor restaurants, a ferris wheel, a merry-go round, and boat tours round the bay. Lunch was fish and chips at Harry Rasmusden’s. Stuffed, I still find room for a rum-raisin ice-cream cone. I people-watch at the bay. It is quite entertaining. I meet Pauline and her dad. They sit cross-legged on a bench, people-watching as well. We shower each other with grins that seem to say, “People-watching is fun, isn’t it?!” 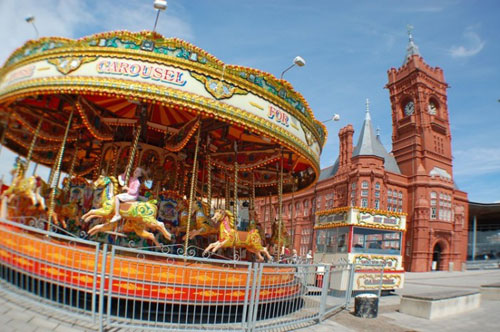 I hitch my ride back into town for a lazy walk around the park, but frankly to walk off Harry Rasmusden’s. Two young boys are playing rugby. Like a drug addict, I feel the familiar pang coming back on. I had only just retired from playing women’s rugby for the last 10 years. Either grunting to intimidate the opposing front row before a scrum engagement or bursting through at full speed as an inside center. Rugby ran through my veins.

I unwind at the park before I head back for my luggage, and I make the trek back to the station. I pass out on my train back to Paddington, and awoke startled by Prince Harry and his commoner girlfriend sitting across from me. I do a double-take. He is a spitting image. I watch the sunset over meadows as we zoom back to London …

I meet my sister a few days later.

“So did you guys check out the nightlife?” I ask.

I’m puzzled. How the hell can you conclude its a boring place? I rolled my eyes yet again at the usual excuse – not enough time.

A farmer’s tool shed could be an exciting place … if you make it so.

This article was originally published on Matador Travel and has been reprinted with permission of the author. All photos © Lola Akinmade.