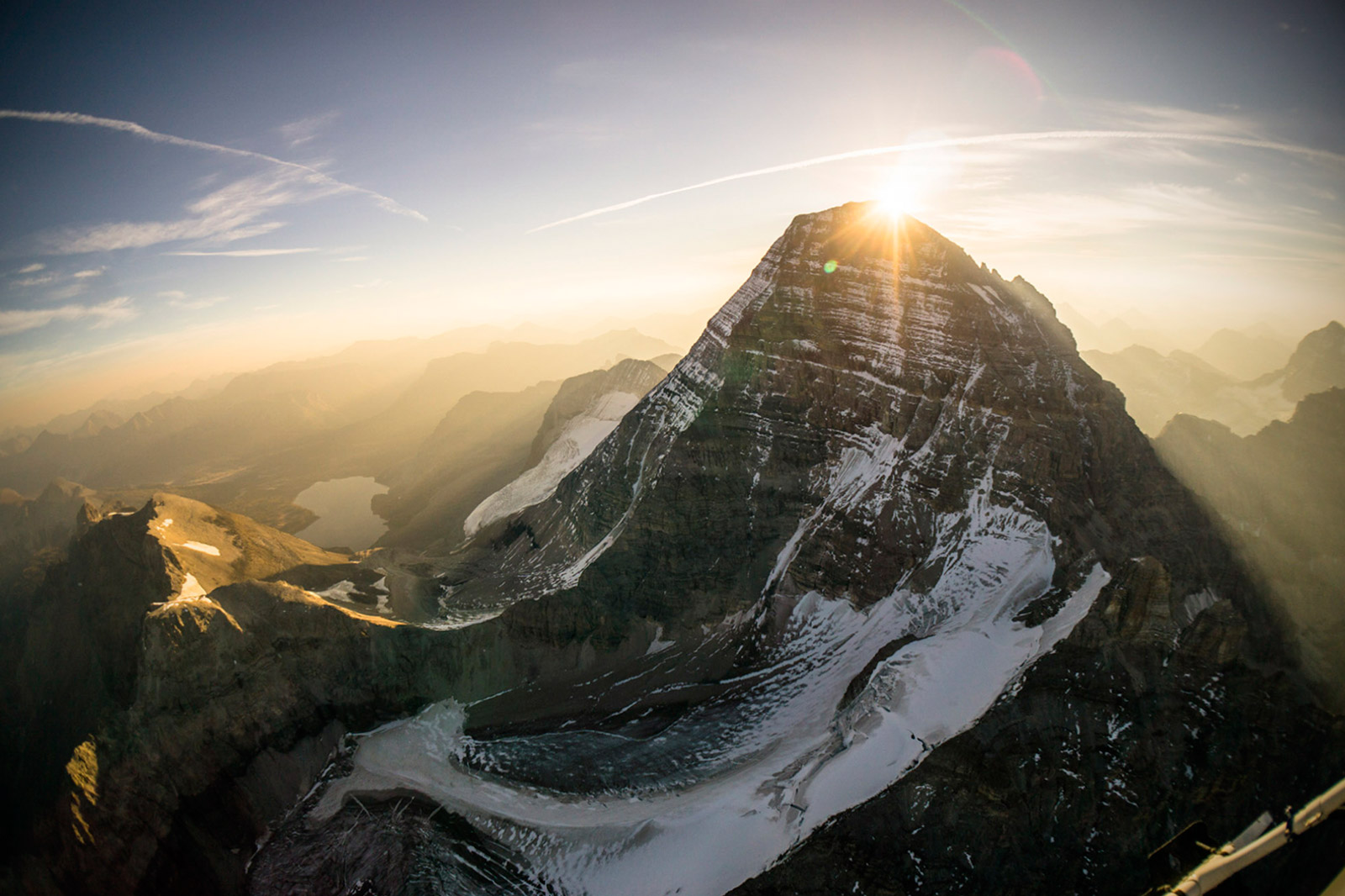 Bucket List Adventures: A Helicopter Tour Over the Canadian Rockies

On the continuum of once-in-a-lifetime, bucketlist-worthy experiences, I’d say “helicopter ride over the Rocky Mountains” ranks high for most travelers. Or, at least, it certainly should. So, when Viator invited us (as part of their Ambassador program) to take a flight over the rugged mountains outside Calgary, we jumped at the chance.

We drove the 45 minutes west of downtown Calgary to a small, unassuming check-in office near the Stoney Nakoda Resort & Casino. Mrs. Vagabondish was terrified. And that’s putting it mildly. She admits to nearly breaking down in tears in front of the woman who checked us in. But, this was to be her very first helicopter flight and she assured me that she wanted to do it, no matter what.

After check-in (and multiple trips to the lady’s room to shake off the nerves), a very competent instructor provided us with a brief list of essentials to bear in mind while we were outside near the chopper (it just feels cool to call it that). The gist:

With these common sense tips in mind, we stepped outside to the helipad. Even with Calgary less than an hour away, there’s a crisp smell and an impossible quiet that envelopes the Rocky Mountains. Slowly, the deep, recognizable thumpthumpthumpthump of helicopter blades grew louder as our ride approached. Less than a minute after landing, we were ushered aboard, harnessed into place, and fitted with headsets to chat, laugh, and scream amongst each other. Thankfully, aside from the pilot, we were the only two passengers aboard the five-person tour — a surprise private tour! 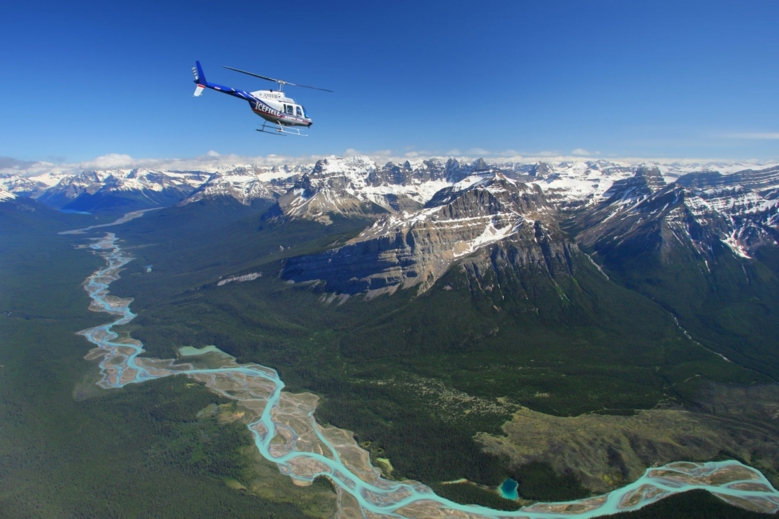 With the proper wind conditions and a pilot who knows what the hell they’re doing, the ride is surprisingly smooth. It’s a bit like flying in a small plane. However, the body of the helicopter actually “hangs” below the main rotor so, at times, there’s a noticeable sway. It’s totally normal, but it’s an odd sensation if you’ve never experienced it before. 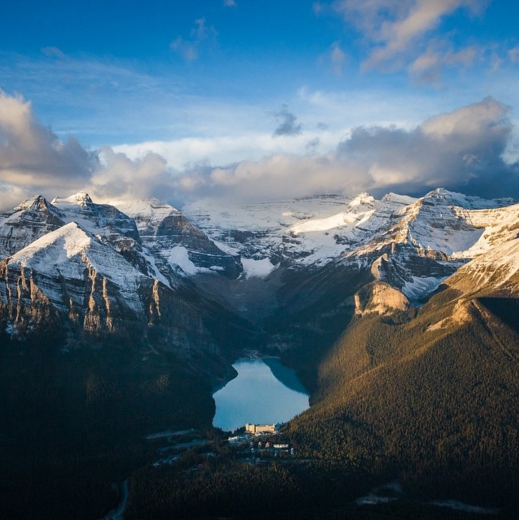 As with anything, fear almost always extends from sheer ignorance — of simply not knowing what to expect. Once we were airborne, the look of terror on Mrs. Vagabondish’s face subsided almost immediately into one of sheer, childlike joy. I believe the technical term for her expression was “WHEEEEEEEE!”

Flying in a helicopter in any destination is a unique and exhilarating experience. Add to that the breathtaking landscape of the Canadian Rockies and you have the makings of a once-in-a-lifetime experience that’s impossible to forget. Our 20-minute ride was brief, but it was enough time for our pilot to relay the area’s highlights to us. In our short time aboard, we flew over the Bow Valley, Mt. Lougheed, and Wind Mountain and he shared the history of the area’s First Nation people. It’s easy to see why Banff is perhaps Canada’s most cherished National Park.

The predicted snow held off for the duration of our flight. Instead, a lingering, low cloud cover blanketed the surrounding peaks, creating a uniquely dramatic mood that made for some great photos! The entire experience is one we won’t soon forget and (not surprisingly) Mrs. Vagabondish is all too excited for our next helicopter ride. 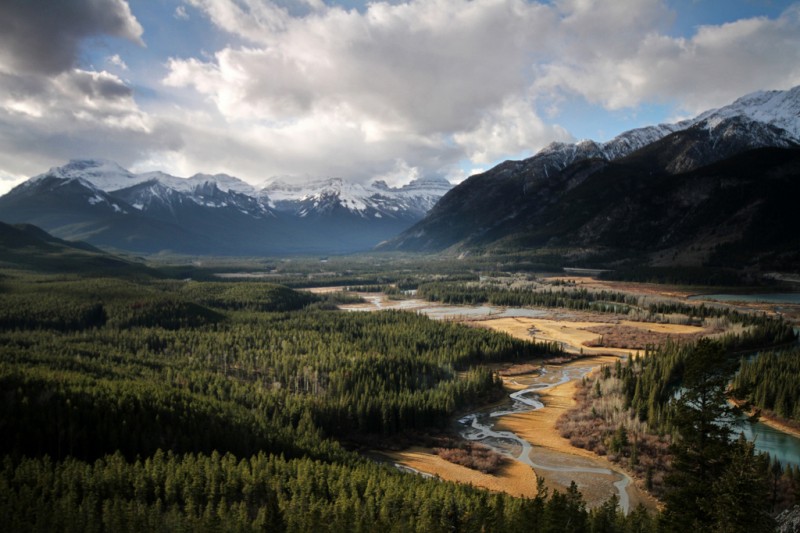 We opted for the relatively brief, 20-minute “Rockies Flight” which was a great helicopter ride “sampler”. I highly recommended it for travelers who’ve never flown before and aren’t sure if they’re going to dig it.

But, Viator also offers extended helicopter tour options, including a 30-minute Signature Flight and a 55-minute Ultimate Flight. The latter allows fliers to travel deep into the Rockies to explore peaks and rivers (including the waterfalls at Mt. Assiniboine and a fly down the famed Continental Divide) that few on the ground will ever get to see.