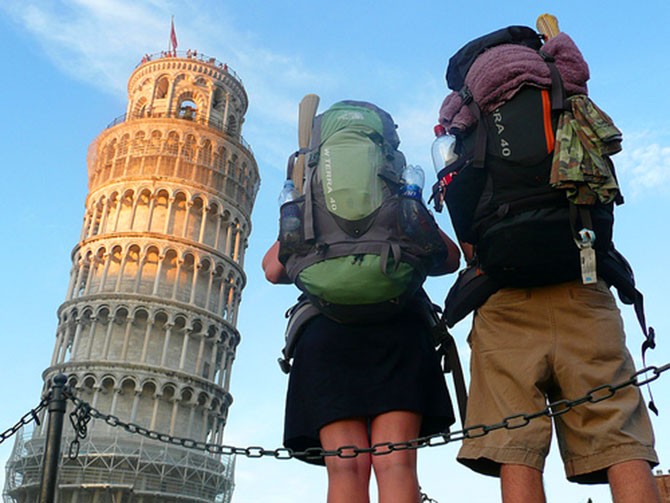 Why Budget Travelers Are Not All “Stereotypical Backpackers”

I came across someone recently who wanted to do some long-term traveling, didn’t have much cash for it, but didn’t want to get drunk in hostels every night, and thought there was no alternative. I set her straight — not all budget travelers are what we might consider to be the “stereotypical backpacker”!

There are so many ways that you can travel without needing to spend a fortune. And while I thought they were commonly known, I guess that’s because I’ve spent a lot of time traveling that way. These are some of the things I explained to her:

Backpackers at the Tower of Pisa, Italy © Lindy

Hostels Are Not Just for Youth

Obviously with a name like “youth hostels”, hostel-style accommodation has an understandable reputation for being only for young people. It’s not, or only in very rare cases.

More importantly, not all hostel rooms are huge dormitories to be shared with all and sundry. Many hostels offer small rooms of bunks, double rooms and even single rooms, usually with shared bathroom facilities but even sometimes with your own bathroom. Of course, these rooms cost a little more but are still usually considerably cheaper than a hotel.

Plus you get the added bonus of common areas where you can meet similar travelers and get tips from those who’ve already been where you want to go. My father — who, let’s just say, is “well into retirement” — has happily stayed in youth hostels and always had a great experience.

Independent Travel Is Easier Than You Think

Honestly, independent travel is much easier than you’d imagine. I know a lot of first-time travelers feel like they need to jump on a Contiki tour or something to get around, especially if they’re traveling solo. But joining a tour not only makes your trip more rushed and inflexible than it needs to be, it also makes it more expensive.

There are so many independent travelers out there who willingly give advice to other travelers who want to do something similar. And the internet (or on the road) is such an easy place to get in touch with them. You can also find so much information online these days — timetables, bookings, opening times — that traveling on your own plan and schedule is much simpler. The first step is scary but once you’re on your way, you’ll never look back. You’ll Meet All Kinds of People

You’ll meet all different kinds of people on your travels, and not just the “stereotypical backpackers” that people imagine are out there. Yes, you might find jaded backpackers who spend their evenings in pubs and their days sleeping it off, not interested in another museum or historical site, but they’re far from the majority.

If you’re traveling independently (and especially if you’re traveling solo) you’ll bump into similar travelers as a matter of course. Bus rides might be shared with travelers who are heading for the same spot as you but from a completely different part of the world. The age range of people sharing the hostel kitchen could span decades. Some of my best friends from my travels are old enough to be my mother and others are more like my baby sister. And they are certainly from all over the world.

Luxury Is Allowed Too

This friend of mine was a bit concerned about the idea of “slumming it” in a hostel every night for months on end. Personally, it doesn’t bother me (I’d much rather spend my money on lengthening my trip or experiencing something new than having fancy sheets and towels) but it’s still an important point to consider: even budget travelers are allowed to splash out occasionally.

I admit I’ve even done it a couple of times — after CouchSurfing on a vague acquaintance’s living room floor in Sydney for a week, I spent the last two nights of my trip in a fancy hotel, using some of the money I’d saved that week.

And if you’re traveling long-term, it’s nice to give yourself a little boost now and again and not have to share the showers or walk down a long corridor to the toilet. You Can Top Up Your Travel Funds

The “stereotypical backpacker” image doesn’t seem to include the idea of staying long enough in a place to put down a few (short) roots. But if you decide to stop and work somewhere for a while, you’ll get to know plenty of locals and ex-pats, get a whole different experience, and top up your travel funds — and importantly, it’s not as hard as you’d think.

For example, for under-30s there are all kinds of Working Holiday arrangements available between an increasing number of countries; there are also numerous places that welcome seasonal workers. You might even have the kind of skills you can turn to online work and make money in a location independent way.

Suffice to say, there are many different kinds of people traveling the world today — after all, it’s easier and cheaper than ever before — that the drunken backpacker stereotype just doesn’t really hold true anymore. You can be a budget traveler without being close to that (or you can have a few nights like that and then be utterly different the rest of the time — we’re not saying you should never get drunk with your travel buddies!). And you can be a budget traveler without having to take a bus tour or stay in crowded hostel dorms, if that’s not your thing. Investigate, read, ask experienced travelers and you’ll see a whole new world of independent travel opening up before you.