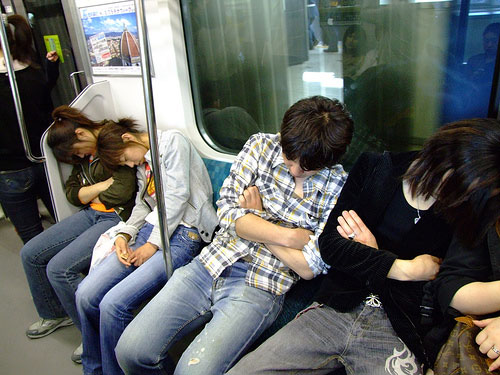 This is the Japanese art – or gift – of ”˜inemuri.’ In the most sleep-deprived nation on Earth, the Japanese talent for falling asleep anywhere – on trains, in elevators, during meetings – is both necessary, and admired. In Japan’s workaholic culture, falling asleep out of exhaustion is a testament to hard-work: only slackers get a full night’s sleep.

There are still rules. Try to keep upright – no lounging. And inemuri is particularly encouraged for the folks on the lowest and highest ends of the totem pole – middle managers miss out. But beyond that, Japan doesn’t observe the same sleep taboo that exists in much of the Western world. As long as it doesn’t ”˜endanger the social situation,’ a power nap is hardly ever out of the question.

And, yes: people fake it. But even when Japanese workers are genuinely sleep, they still seem to maintain their composure: somehow, no commuter ever seems to sleep through their stop.