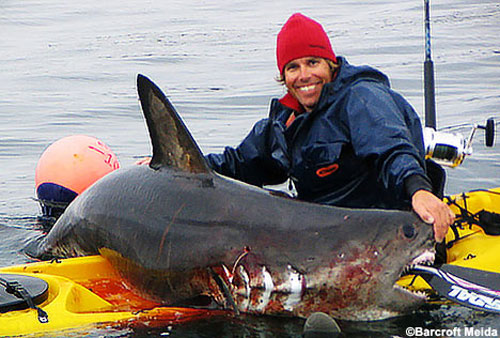 File this under: Things I’d Never Do #9726726. Right after glacial surfing. It seems the big new fishing experience doesn’t involve an outboard motor. Yes, hardy rowing folk have decided it might be fun to start hunting sharks ”¦ from fiberglass kayaks. No word on whether they also find it fun to have their limbs torn off.

According to the UK Daily Mail, fishermen from Alaska’s American Ocean Kayak Fishing Team went paddling amongst a group of some 300 salmon sharks, and hooked four of the nine-feet-long pointy-toothed critters (said to weigh up to 1000 lbs), later releasing two of them, presumably so the sharks could regroup and seek vengeance at a later date. 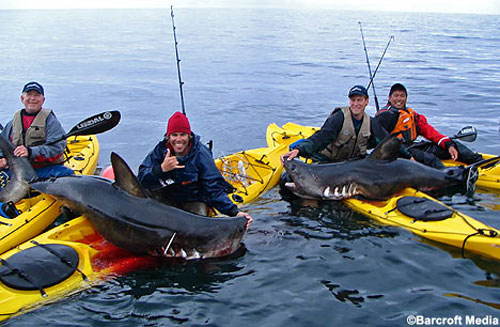 “We are all experienced anglers and kayakers so either as a whole or individually, we felt confident in our personal abilities and limits,” said the captain, Chris Mautino.

“The sharks were concentrating on feeding on the Pink Salmon and I really don’t think they gave us a second thought,” said Senor Insano. “We slow trolled the bait behind the kayaks with the rods laying across our laps ”¦ Our biggest concerns were staying upright in the kayaks and keeping from getting tangled up in the gear and pulled over as well.” One wonders if “not getting eaten” was another important concern.