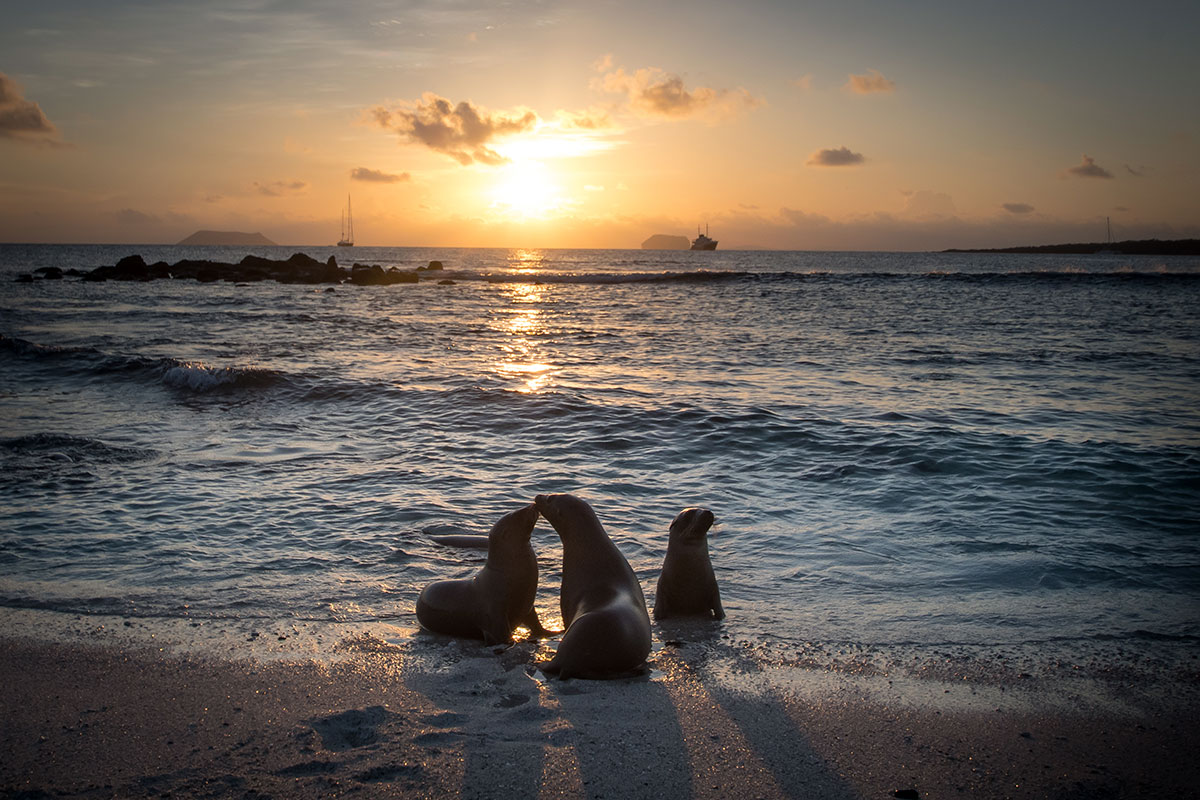 #1: A Marine Iguana on the Skull of a Whale Skeleton … on an Abandoned Beach

Along a deserted sandbar on a tiny, remote island, populated only by seals and bright red Sally Lightfoot crabs, I watch as a marine iguana emerges from the sea and saunters up the beach towards a beached whale skeleton. Eager to catch the last bit of the day’s warmth, the iguana scampers to the highest point of the whale’s skull to watch the sunset as waves crash onto white, powdery, sea lion-covered sand.

#2: A Galapagos Penguin Parts a School of Sardines on a Morning Snorkel

While snorkeling in crystal blue water along the edge of a jagged, cactus-lined black lava rock shoreline, chasing a purple octopus, I look up to spot a school of roughly five thousand sardines move towards me. With the fluidity of smelted silver and the collective agility of an NBA championship team, the school maneuvers along the shoreline, pulsing and weaving until suddenly it splits like the Red Sea, parted not by Moses but rather a lone, adorable Galapagos Penguin, the size of a football and as cute as a … well … as cute as a tiny Galapagos Penguin.

#3: Sharks and Seals Feed on Flying Fish Under the Milky Way

With the closest major city on the Ecuadorian mainland some six hundred miles away, on the night of a new moon, the stars of the Milky Way explode. Whilst stargazing on the deck of the expedition ship, The Evolution, on a tour operated by International Expeditions, I hear a thud on the boat’s hull followed by a brief, chaotic splashing. A moment later, another thud, and more splashing. Over the edge of the boat, at first, I see nothing. Then something akin to the skipping of a stone followed by a thud. “Flying fish,” says my guide, as chaotic splashing occurs again. “They are attracted to the light of the boat.” From the black, a dozen eight-foot Galapagos sharks and six sea lions emerge, thrashing and ravenous. “And the sharks and sea lions love to eat the flying fish.” He leaves me to watch the sharks and marvel under the billions of stars.

Few things are more other-worldly looking than a hammerhead shark. You can see this for yourself snorkeling at various spots throughout Galapagos Island and Marine Reserve. To spot such a creature emerging from the deepest blue is arresting (and surprisingly safe). They are, however, skittish and the slightest movement in the water sends them moving on. As I watch them move to vanish into the murk, I dive down to catch one last glance of the nine-foot hammerhead but it is gone. I swim to the surface just as something else emerges from the blue. Not one but more than two hundred golden rays, each one the size of a fiat with its doors open. Sunlight dances off the backs of the serene creatures as they glide beneath me, their gentle wings flapping in perfect synchronicity. Until, like the hammerhead, they disappear into the blue.

Bonus: A Champagne Toast at the Equator

Most of us spend very little time thinking about our latitudinal and longitudinal coordinates. That is probably a good thing … There are bigger things to occupy our grey matter.

That all changes, however, the moment that you learn that shortly after dinner, your boat will cross the equator. While there is no actual line or a floating gift shop, there is something remarkable about sitting on a boat with the captain watching the latitudinal coordinates slowly tick down to 000.000. Particularly, when, at the stroke of 000.000, you celebrate with a champagne toast in The Galapagos Islands as The Milky Way shines above and sharks circle below.