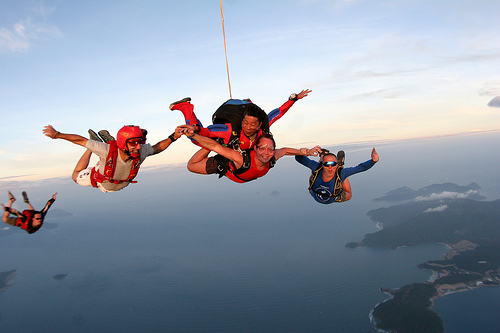 The 7 Best Places to Skydive Around the World

There are only two to three seconds of pure terror: the moment you launch yourself from a perfectly good plane 4,000 meters in the air to the instant your body reaches terminal velocity – about 200 kph.

Even the most seasoned instructor will question his sanity from time to time before committing himself to such an action. Skydiving by nature is against every instinct built into every fiber of our being.

Fortunately, being released from such a high altitude plays a trick on our eyes and enables us to simply “get over it” and enjoy the ride; humans have no perception of height above 1500 meters. Whether you jump out over the upper thermosphere or at a mere 15,000 feet, the ground tends to stay where it is, with no sensation of falling. Pleasure ensured, fueled by a mix of endorphins, adrenaline, and whatever drugs our bodies feel compelled to release, telling us “this is soooooo wrong”. And yet it feels so right. 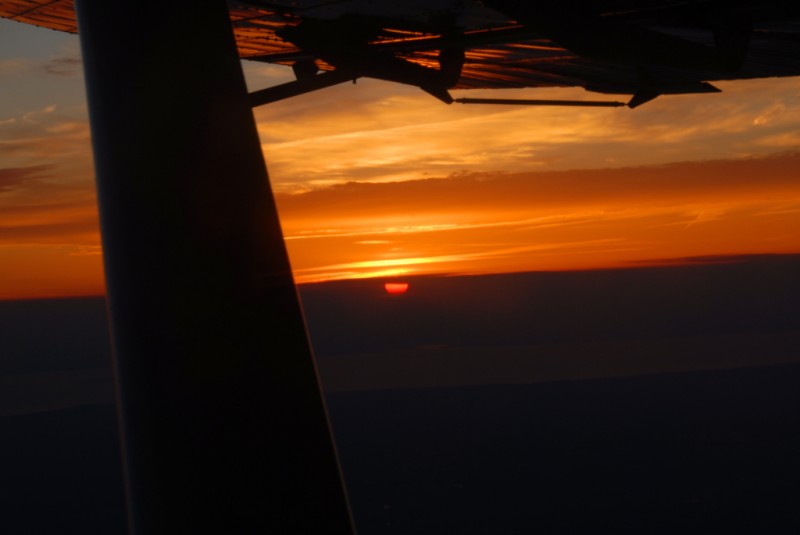 Being released from high altitude plays a trick on our eyes, enabling us to simply “get over it” and enjoy the ride. Humans have no perception of height above 1500 meters.

With so many jump zones from continent to continent, you really have your pick of the litter when it comes to making a first tandem jump. So where are some of the more interesting places around the world to skydive?

Taupo, New Zealand is the skydiving capital of the world. Nearly 30,000 crazy people venture here in the summer months to pay for an experience most of the world looks upon with a mixture of trepidation and lunacy. As a “veteran” skydiver (two jumps up to that point), I had to give it a shot.

Skydive Taupo offers quite the benefits package when you reserve a spot at their jump zone. A white limousine saunters into the local information station, an i-site, every few hours to escort passengers to their airport office.

As for the jump itself? I’ve been fortunate enough to visit Taupo:

There is no fear, only amazement that I’m back where I belong, in a part of the Earth man doesn’t reach towards often enough. I’m yelling, screaming, staring at distant Mt. Doom (Lord of the Rings was filmed here) and the rolling hills near the airport, seemingly defying gravity, ignoring the rules of nature, laughing at those who choose not to submerge themselves in adrenaline, forgetting everything down there in the real world, focusing only on this one, a lair for gods, for kings, for those who can look down and pity those tiny scurrying ants, riding the clouds like a chariot of fire directly into the heart of the sun.

Where else can you see from coast to coast upon your release into the wild blue yonder? Well, Hawaii, smaller Pacific islands … but Guam takes the cake. Skydive Guam caters to English and Japanese speakers, in addition to offering unparalleled island views.

Even with temperatures thousands of meters up much lower than those at ground level, it’s not often skydivers need to suit up in a full winter jacket with gloves and a hat (usually fall off, anyway). That is of course, unless you choose to take in an aerial view of the Swiss Alps.

Glacier-enclosed mountains, peaks with snow slowly melting in the summer months, and a full-on look at the city of Interlaken.

In my humble opinion, you just can’t beat Australia and New Zealand when it comes to extreme sports like skydiving. When jumping in eastern Australia, you might be lucky enough to catch sight of the Great Barrier Reef, World Heritage Rainforest and some great golden sand beaches. Head over to Queensland, Cairnes, or Mission Beach.

I must admit a little bit of bias in suggesting San Marcos, Texas. Not only is it less than 50 km away from my hometown, but it was my first jump and will always have a special place in my heart. Aside from that, Skydive San Marcos is an excellent place to jump if you enjoy the horizontal; Texas is remarkably flat, and in this case, gives you the opportunity to see hundreds of miles in every direction. Not to mention the sunset jumps offered on occasion.

Come back to Texas for the friendly and organized staff, to start your Accelerated Freefall (AFF) training, and to enjoy a laid back first-timer experience.

Oh, and the best thing after an adrenaline-filled, hunger-inducing skydive? Barbecue. Lots and lots of Texas barbecue.

Bottom of the World

As far as I know, there are few and far between places to jump in Africa; next to nothing in the Sahara, and you’d have to be crazy to risk landing in the jungle. South Africa, on the other hand, is just about as far south as you can get without risking an Antarctica jump. Look into options around Plettenberg Bay for some great views of the surrounding wildlife sanctuaries and mountains. On the right day you might just see a whale!

If you can’t stand the heat…

… don’t think about skydiving into a volcano. At least, that’s an option if you choose to dive over Kamchatka in Russia. DAVS Tours offers tours including a visit to a hot springs and a jump over Avacha, the active volcano in the region.

Although you may not be dodging rivers of lava (more than likely, the area will be iced over), think about exaggerating your story for later tellings, e.g. “So this girl was about to be sacrified to the volcano, right? And the only way I could rescue her was to be launched from a plane and catch her a split-second after my parachute deployed …”

What does the future of skydiving hold? Wing suit technology already enables jumpers to move through the skies as fast horizontally as they do vertically. I personally hope to see higher altitude jumps, resulting in greater freefall times… perhaps we may even get to the point of launching people out of low Earth orbit (special suits, of course). The point is, some of us just aren’t meant to stay Earthbound; we’re destined to fly.