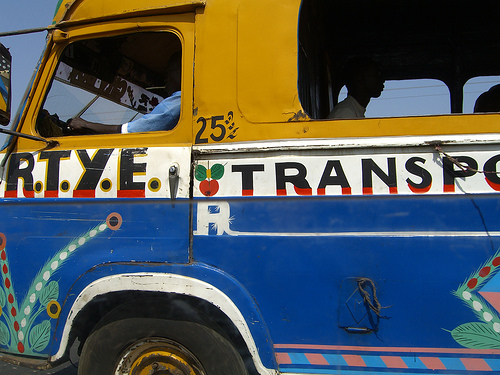 “No, no, no! Train, no good” pleaded Souleymane, my faithful friend of two days, referring to the infamously difficult train from Bamako, Mali to Dakar, Senegal.

I look back on that conversation now, jammed into a place the size of a baby car seat. A metal bar sticks into my left buttock and I squirm about trying to correct a discomfort that began 3 hours ago.

I ask my traveling buddy next to me if we could position ourselves in such a way that he could massage my buttocks to improve the circulation.

6 foot 5 and a man of few words he looks me in the eye and says he would rather throw himself from the bus.

I believe him. Instead I close my eyes and focus on my ass chakra, transferring the life force of my brain to my nether regions. It works.

I look around the bus. The aisles are full and no one utters a word, not even the ram tied to the roof rack, as we charge forth towards the Senegalese border during the hottest part of the day.

The interior of the bus is like an oven with no timer and we are the giant turkeys, glazed in sweat, dirt and ram’s hair. The feculent odor of fifty or so bodies mixed with a trace of diesel bludgeons my olfactory sense. The block of air trapped within the bus ranks up there with a sauna of dead rats.

This bus has it all. And it’s this box of pain, sweat, thirst, and stale air that brings me back to West Africa every time. It’s that feeling of human togetherness that you can’t duplicate on the Metro or a Double Decker bus. Despite the hardship, the people still smile, they still sing, they still share.

West Africa, an often neglected section of Africa for travelers, offers much more than the animals, the landscape or the archaeological sites that you would find in the East of the continent. You come here for a people that offer color and an exuberance that would force any agoraphobic outside and anyone in the depths of depression to become a circus clown.

The music they produce, from the block rocking beats of Senegalese Mbalax (a fusion of jazz, soul, and traditional drumming) that tugs at your internal organs and forces even the rhythmically challenged to take to the dance floor, to the deep Malian melodies of legend that ripple through your body like a breeze across a desert dune.

The bus rattles on like a Hari Krishna tamborine and we eventually make it to the border – a distance of 586km in just over 20 hours.

We extract ourselves from our seats, ooze out of the bus and line up in single file to be processed by Malian officials. I have my visa and I have my vaccination card. They stamp me out and send me on my way.

People mill about in the shade, stocking up on oxygen before they have to board again. 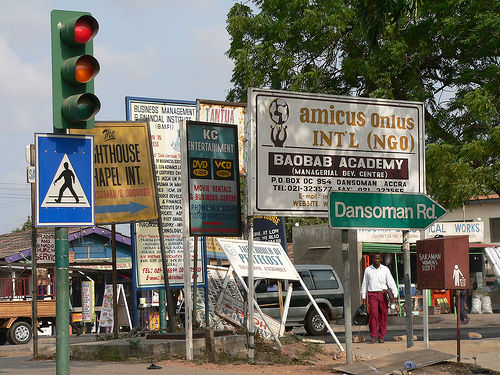 Trucks and remnants of trucks line the single road into Senegal. A layer of dust and rubbish coat a flat land stirred up by an easterly Harmatan wind. I venture off the road in search of food and a glass of tea. Tables and benches are laid out in front of shacks for the weary traveler. I am just such a person and I wear my weariness like a heavy cloak. My joints are stiff and my eyeballs dry, but I reciprocate the smile beaming back at me from the Malian (or possibly Senegalese) girl selling her wares.

She has no doubt seen my type before. Tall, unnaturally good looking adventurer forced to endure a position for a lengthy period of time on a bus designed for the transportation of chickens.

She points at something behind me as I sip my tea. People are filing back onto the bus. I gulp, give one last smile and rush off to meet the others.

The driver – a tall, skeletal man – lights up another cigarette, turns the bus thermostat up to oven—bake and roars off across the border into a small Senegalese town.

Did I miss something here? Aren’t we supposed to have our passports stamped for entry into Senegal?

I breathe a sigh of relief as we pull up outside of a white compound where we are told to hand over our passports and await further instruction.

My companion and I are pulled aside and questioned on our respective occupations. “Lion tamer” enters my head, but I settle for “IT Technician” to be on the safe side. My friend says “Chef de cuisine”.

Happy with our career choices and some new recipes shared by the “Chef de Cuisine”, they let us go. The same courtesy is not extended to a couple of Nigerians and a Mauritanian who don’t have the required vaccination card.

Money seems to be the alternative record of one’s yellow fever shot at a lot of borders in West Africa. The Nigerian guys are very angry because the going rate is a lot less than what the Senegalese officials are asking for.

“I paid half this at the Burkina border,” one argues.

The rest of us sit and wait until a compromise has been made. The Nigerians, clearly unhappy, join us on the bus and we move off 200 metres down the road where we are asked to alight again.

The driver wanders off to find some more cigarettes while the ladies on the bus squawk at each other and the customs officials over the declaration of their goods packed into the hold of the bus. From the roof rack, the ram looks on, curious to when the giant ball of fire will cease melting his horns into the back of his head.

I strike up a conversation with a Gambian man who tells me all about his precious stone business. Apparently sapphires are big this year and there really is no need to smuggle them up your backside. You can send them by post. Good to know.

The driver, high on tea and cigarettes, lets out a blast of the horn, we take up our Yoga positions aboard the bus and shudder on to Tambacounda. 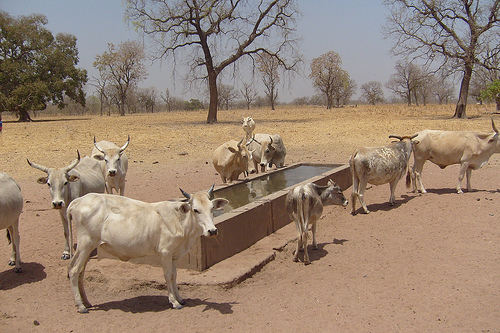 Tamba (for short) is a junction town, criss-crossed by roads leading to Dakar, Guinea-Bissau, Guinea, Gambia and Mali. My companion and I decide to stop there for a night to break up the trip to Dakar which was going to take another 24 hours by bus.

With lens-less sunglasses a young taxi driver herds us into a car which has had its innards sucked out through the floorboards. Four men behind us take up their positions and at the signal proceed to push the car across the road to a service station. The driver issues another command and the car swings around, moves by wind forces that propagate its momentum to creak to a standstill at the entrance of the hotel. A hotel so close that if I had lain down on the ground after exiting the bus I could have reached out and dinged the bell at reception.

We all laugh raucously (including the driver) at being duped. For me it was a welcome respite from two days of West African transportation.

Would the train have been more comfortable? Possibly. Would it have offered me the chance to meet a Gambian man selling sapphires, a crazy taxi driver with a car powered by his brothers, and a ram who just wants to go home? Probably not.