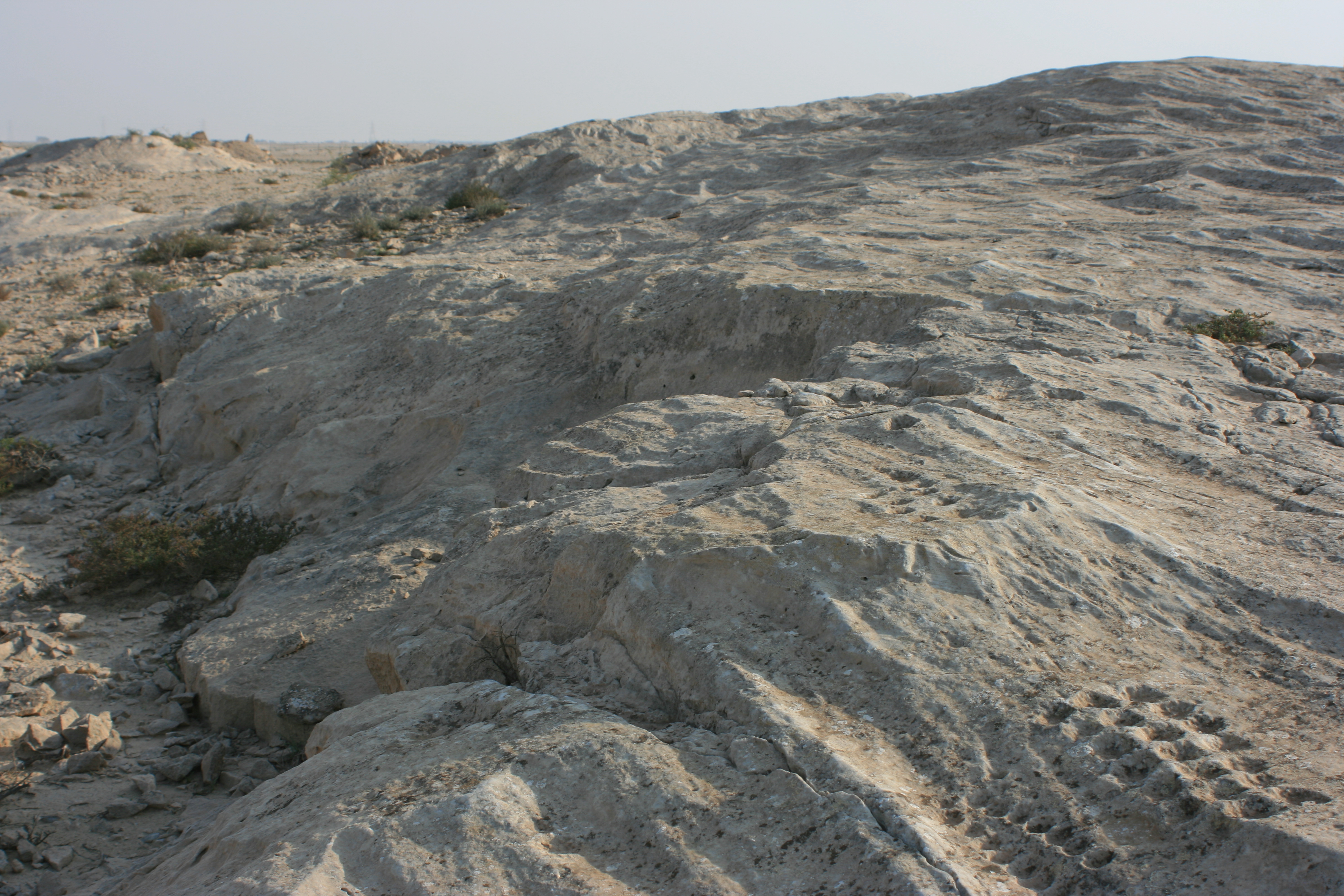 Basking camels and sparse shrubs whizzed by us, blending with the dust swirling in the horizon. As we continued across the flat, open expanse of Qatar’s desert, the stillness of the place struck me. Only an hour outside of the country’s bustling capital, Doha, it was hard to conceive that amongst the limestone mounds and abandoned villages that littered the landscape of Al Shamal was once a centre of trade and community centuries ago. It was in this little pocket of limestone that the rock carvings of Al Jassasiya lay hidden, a most unlikely candidate for such a central hub.

As the car snaked its way through the entrance, I was taken aback by the surroundings of the site. Located next to the main road with no signs or formal entrance, a dilapidated iron fence was the only form of protection for the carvings. A series of grey limestone mounds stood in rows along the entrance. With no signs or directions, it took several minutes of searching the maze to spot the petroglyphs against the backdrop of the sun’s strong rays. 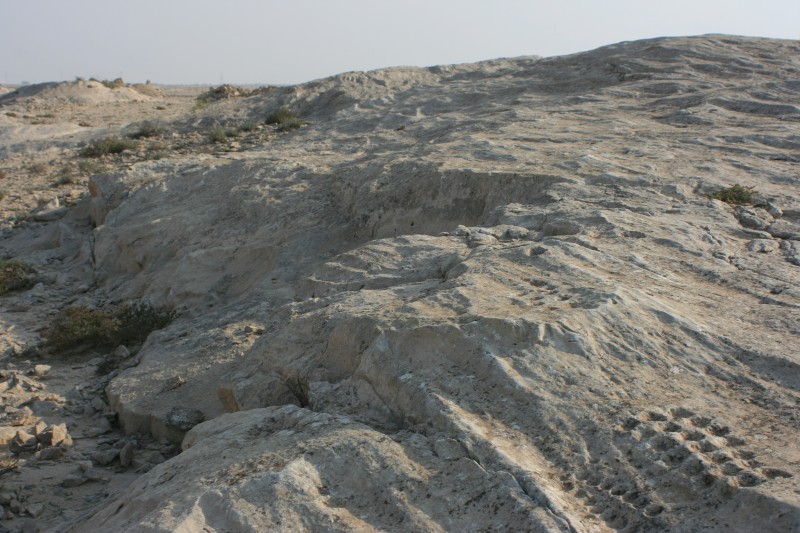 Once a limestone quarry, the discovery of the carvings caused an instant halt to any more work. Little has changed to the area since, and with approximately 900 carvings stretching across the northern coast of Qatar, Al Jassasiya is unique to any other petroglyph site found in the world. Although little is known about the site, their state of preservation and sheer quantity make them a vital aspect of Qatar’s heritage.

After initially finding the rock carvings, it was thereafter impossible to miss them. Dozens of dhows (ancient Qatari boats) sailed across the limestone rock in their numbers, their thin oars stretching like elegant fingers in neat rows. Between the dhows sprang tidy carvings of daisies. Scattered amongst the rest of the carvings were orderly rows of cups, roughly seven to nine in number, etched deep into the rock. Although the purpose of these cups is unknown, it is popularly believed that they resemble the cups used for the board game ”˜Mandala’, which originated from West Africa. 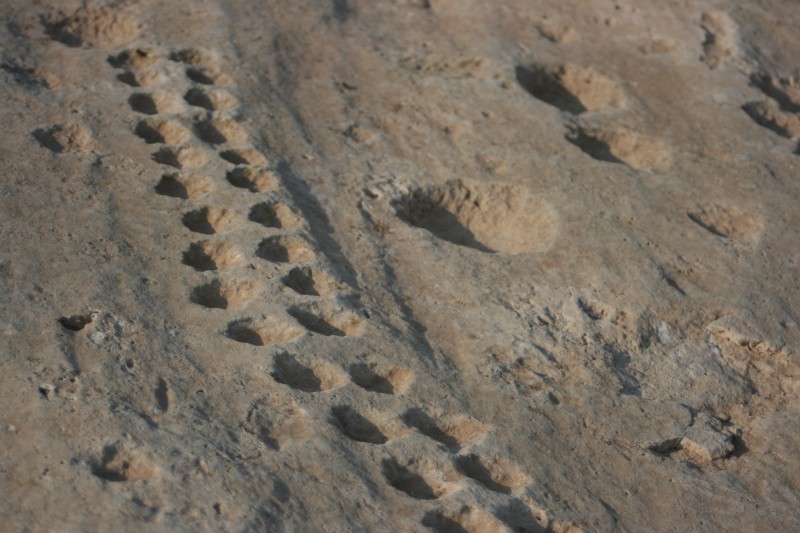 As I gently tiptoed up the side of the face, my fingers brushed gentle grooves in the rock. These minute channels trickled into deep circular holes gouged into the top of the mound. Following the direction of the channels, it soon became evident that the channels connected several of these deep holes across the mounds with each other. Stepping back from the mounds, the mismatched and random scattering of the carvings across the face of the mound formed a peculiar kaleidoscope of images. Staring at them as a whole it was impossible to discern what common thread they bore; their meaning disappeared long ago with the artists who originally carved them.

This has not stopped professors and other enthusiasts guessing however. Although no one is certain of the date of the carvings, several theories have emerged debating the symbolism of these petroglyphs. Some assert the dhows represent the prominent role the sea plays in the life of the Qataris, and their symbolic value in crossing them into the afterlife after death. Others assert the flowers and cup-marks were for storing pearls, an industry Qatar played a prominent role in until the 1930s. The series of channels and holes are believed to celebrate the rain, a scarce commodity in Qatar. On the other hand, some people unusually assert the carvings match constellations, such as Orion’s Belt. Despite these varied hypotheses however, the creators of the rock carvings remain unknown, still waiting to be discovered in this small pocket of the desert expanse. 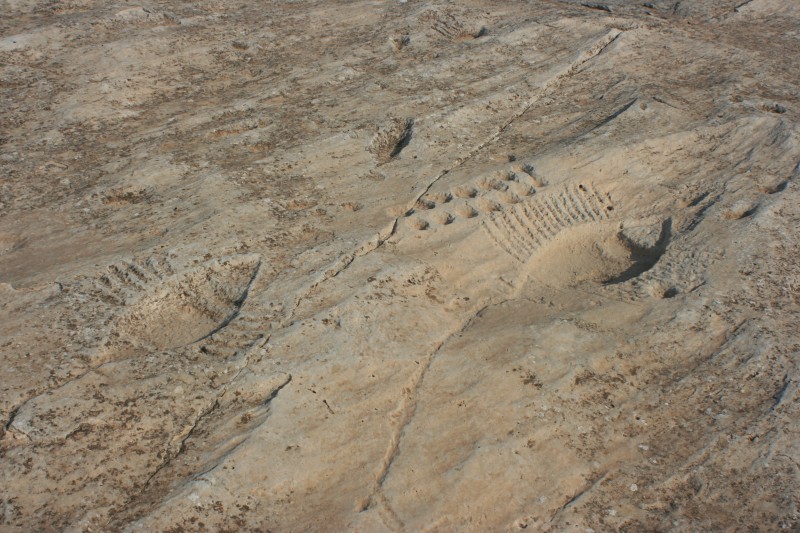 The carvings themselves are not the only piece of forgotten history in Qatar. Taking in the surroundings of the mounds, the sun reflected sharply on a particular patch of the ground. Upon closer inspection, shards of pottery littered the sandy floor of the mounds. Covered in a green glaze and etched in symmetrical lines, the profuse amount of pottery from the area has dated the site back to at least 800 years ago, although it is widely believed to be older than that.

Gazing around the mounds and sand, it was difficult to imagine that this area was once filled with people. The wind kicked up gusts of sand, and the silence surrounding the site produced an almost mournful atmosphere. With the purpose of the site and its people long forgotten, the carvings were the last whisper of their existence in this otherwise abandoned landscape.