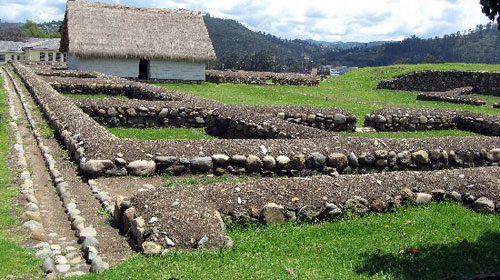 With a rich, vibrant history, Cuenca is a colorful valley town defined by its abundance of colonial architecture, museums, and green riverbanks. The friendly cuencanos “sing” (Cuencan residents have a well known reputation for the distinct, harmonious way in which they speak) crisp, clear Spanish as they relax in the plethora of plazas or stroll along the narrow sidewalks of their proud community. Nevertheless, lining the cobbled avenues are endless Internet cafes, appliance stores, supermarkets, as well as the occasional shopping mall. Like a well-oiled machine, Cuenca thrives while combining its rich past with its up-to-date amenities.

Besides its eye-popping beauty, you can also count on Cuenca’s steady, spring-like climate. The days start out with warm, sunny skies, followed by a short afternoon shower, topped-off with an evening which requires nothing more than a light jacket. So, come here at any time of year; just remember to bring an extra layer and an umbrella. 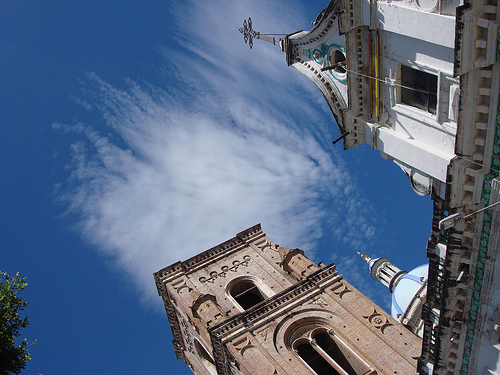 Catch the earliest Aerogal, Icaro, or TAME flight out of Quito (UIO) or Guayaquil (GYE) and touch down at Cuenca’s (CUE) Mariscal Lamar airport. Grab your luggage and pay a couple of bucks for a cab to take you to Parque CalderÃ³n, which lies at the heart of the municipality.

First, stop by the Catedral Antigua and Palacio de Justicia, which face each other on the southeast corner of the main plaza. With camera in hand, amble across CalderÃ³n Park and rattle off several shots of the lush, calming square. Get your photo fix and proceed to the southwest corner of the town center in order to be blown away by the sheer enormity of the New Cathedral.

Upon exiting the Catedral Nueva, head north to Raymipampa, the first restaurant to your left. Grab a newspaper from the counter and ascend the staircase in back. Have breakfast for under $3 as you watch shoe shiners, retired gentlemen, and vendors loiter around Parque CalderÃ³n through the cafe’s huge glass windows.

Return to the Bajada and continue east until you reach the Todos Santos Ruins on your left. Investigate this public site and pay attention to the remnants of a Spanish watermill resting atop smooth Incan stonework, which covers rougher CaÃ±ari rocks.

Finally, round the curve at the bottom of the hill, go back up to Larga and pace eastward till you arrive at Huayna Capac.

Open the tall glass doors of the Museo del Banco Central and pay three dollars to enter. Every level of the museum is filled with fascinating pieces of the city’s past as well as its pre-Cuencan history. The must-see however is the highest floor, which showcases fascinating, extremely-detailed displays of Ecuador’s different ethnicities.

When you’ve had enough of artifacts, wander behind the museum and explore the Pumapungo ruins. While meandering across the grassy, pre-Colombian site, be sure to walk along the snaking pathways of the vast greenspace below the historic hilltop. And when you’ve decided to leave, just remember to grab your backpack from the front desk before closing time (1 PM on Saturdays) or you’ll have to wait until Monday to reclaim it (not that I know anything about this).

Exiting the museum, gallivant north on Capac, hang a left on BolÃ­var, and stop at the Plaza de San Blas. Ramble along the square’s tree-lined walkways and circle the fountain of A. Manuel J. Calle. Furthermore, snap some pictures of the auburn Iglesia de San Blas. 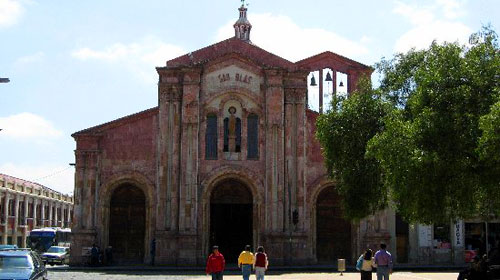 Turning your back to the church, strut northward on OrdoÃ±ez for a few blocks. Veer left onto Sangurima and bargain for some souvenirs at the Plaza Rotary on the southwestern corner of Machuca.

You’re probably famished, so swagger a pair of blocks west and grab a booth inside El BalcÃ³n QuiteÃ±o. This establishment has everything, from salads to seafood to sirloins, as well as excellent service. Settle into your seat, watch some TV, and enjoy a very-filling meal along with a gigantic drink for under $10.

Having spent the afternoon exploring the endless boutiques and plazas in the historical center, return to Larga, and head towards El JardÃ­n; one of Cuenca’s finest eating establishments. Be prepared to spend anywhere between $10 and $30 dollars on a wide-selection of fabulous food and wine as you appreciate the peerless panoramas overlooking the neon-lit Tomebamba River.

When you’ve paid the bill, walk east half a block to La Escalinata. Descend the stone staircase and enter Wunderbar for an after-dinner drink. Perhaps you can get in on a dimly-lit game of Jenga with the well-balanced crowd of locals and tourists? And with a little luck, you can listen to some live music while enjoying your night cap.

Open the doors to El CÃ¡ntaro, a small café on Parque CalderÃ³n’s northern end. If they’re not occupied, dart for one of the tables alongside the restaurant’s front windows so you can witness the happenings of Cuenca’s central park. Then, stuff yourself and try not to laugh when you see that breakfast is only a couple of dollars.

From El CÃ¡ntaro, amble west on BolÃ­var until you find yourself ogling the peaceful Plaza de San SebastiÃ¡n. After bolting towards the relaxing park’s magnificent fountain, take a seat on one of the many green benches, which are underneath the numerous trees sprouting throughout the square, and absorb the tranquil ambience.

Before you doze off, stand up and mosey into the colonial Museo de Arte Moderno on the plaza’s south side. Without having to pay a dime, skirt the flowery courtyards while staring at the dazzling sculptures and paintings inside the pearly museum.

Ditching San SebastiÃ¡n, stroll eastward on Sucre, break right onto Tarqui, and rediscover Larga. Next, rove east until you notice a sign for the Museo del Sombrero de Paja Toquilla on your right.

While checking out the vast selection of Panama hats, make your way to the back of the building and pause for a moment on the rear patio, which overlooks the southern part of the city. After comparing the large map of Cuenca with the real town below, you MUST head down the staircase on the opposite end of the patio.

Finding the cozy café underneath the platform, take a look at the wide-ranging coffee collection, which includes fresh beans and grounds from every region in Ecuador. Then, if possible, grab a spot next to one of the windows and order a sandwich along with a piece of cake for lunch as you gaze at the green banks of Tomebamba River.

Back on Larga, retrace your steps to Tarqui and follow this road downhill, where you’ll dart left just before El Vado bridge and lollygag along El Barranco (the healthy banks of the Tomebamba). While you stroll along 3 de Noviembre, observe the indigenous women washing their clothes in the rapids just below the modern structures and colonial homes that overlook the waterway. 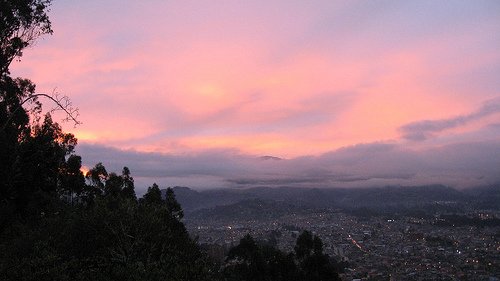 Again in CalderÃ³n Park, catch a cab to see the Mirador Turi. A taxi from the city center shouldn’t cost more than $3.

Once you’ve been dropped in front of the teensy Iglesia de Turi, patiently wait on the steep hilltop and lean on the large railing of the small platform that overlooks the Cuencan valley. As the sun begins its final descent behind the Southern Sierra Andes, you will be mesmerized by the pink and purple skies that overtake the heavens. The fuchsia panorama from this lookout is absolutely precious; it will leave you spellbound.

Hopefully, the previous cabbie waited-out the vistas in his car atop Turi. If not, grab the first taxi that you see and tell the driver that you want to go to El Ché Pibe-a very economical, Argentine steakhouse on Crespo and ProaÃ±o.

Relish the fantastic service as you relish some of the best food you’ve ever tasted in one of the most pleasant towns you’ve ever visited.