Sport is a universal thing. And the best thing is you don’t have be a mad sports fan to get together with the locals in front of a football game or get involved in some activity yourself.

I’m definitely no sportswoman (my teachers would’ve failed me in Physical Education if they could have) but even I have a great collection of traveling experiences centered on sport. So, one-eyed sports fans and couch potatoes alike, read on.

Visiting During a Big Sports Competition

Back when the 2002 FIFA World Cup was on, I accidentally booked a trip to Seoul for the week of the finals — South Korea was the co-host. Not being a soccer/football fan, I had no idea at all and thought I might have made a huge mistake. Yes, the place was full, although fortunately the football fans were staying in fancier places than my hostel so accommodation wasn’t a problem; but it definitely wasn’t a mistake. 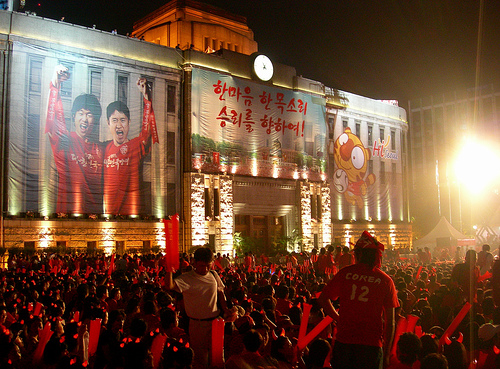 Instead, I got caught up in the fever. Everybody was so happy and I ended up wearing a supporter’s T-shirt and cheering for South Korea while they played in the semi-finals — I joined a crowd of one million in central Seoul, watching the game on big screens. Locals shared their snacks with me, another gave me a bit of newspaper to sit on, and some teenagers taught me the Korean cheer songs. So even for someone like me who could barely follow the rules of the game, visiting during such a big competition was actually perfect timing.

Football follows me, because when I lived in Germany the 2006 World Cup grabbed everybody’s attention, and my own Australian team was based just a few villages away from me. This time I took advantage of my nationality and waved an (often lone) Aussie flag at the outdoor viewing sessions for the games — and that got the locals to come up and chat with me about the fortunes of my team. I even made friends with a local police officer who was so amazed that a real Australian was watching the game in his hometown.

So don’t be scared of booking a trip that coincides with a big sports tournament. As long as you make sure you’re not going to be hindered by impossibly rare or expensive accommodation, or an overloaded transport system (during an Olympics might not work, for example), then you might find it’s the time when the locals are happiest to meet new people and there’ll be much more excitement and action than any other time.

Learning About the Local Sports

For all those non-cricket playing nations: before you go to India, learn about cricket. If you’re traveling pretty much anywhere else in the world: understand soccer (but call it football). With these basic skills, you will be able to fit in with locals in a good majority of the world. All the friends I have who’ve traveled through India came back with photographs of themselves playing cricket with the local kids, who seem to play it endlessly and anywhere. Same goes for football across South America or Europe.

When I visited Saint Petersburg in Russia, I discovered a sport that I still want to learn more about. I spent a whole morning watching a gang of locals play a really unusual sport in some outdoor alleyways just outside the Peter and Paul Fortress. The sport — someone claimed to have known the name and told me, but it remains a mystery to me — seemed to be a distant cousin of bowling, played with a long stick and a bunch of small pipes that were set up in various formations at one end of a long strip of concrete, and should be knocked backwards off the concrete. The locals let me have a go (I was useless, it was much harder than it looked) and tried to explain the rules, but my Russian didn’t get that far at all. But it certainly put another spin on a famous tourist attraction.

Keep a look out for what activities the locals are up to and try to get involved. You’ll learn about their culture and habits as well as just a simple sport. 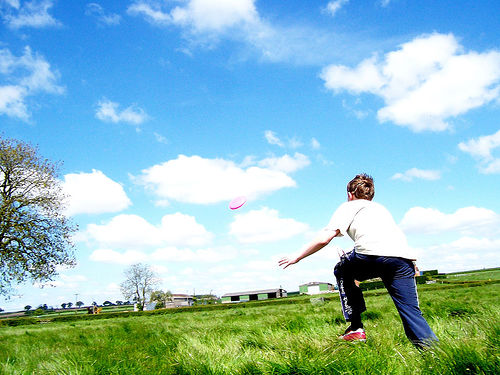 Joining a Frisbee Game in the Park

Just for the record, I’m usually too shy to do this myself, but I’ve met quite a few people who’ve been brave enough to ask to join my Frisbee game. Of course, what I really mean is that whenever you see a bunch of people throwing a ball or model plane or something around in a park, you could ask if it’s okay to join in with them. Locals who are relaxing on the weekend or after work are often really open to meeting new people and giving you some tips on what else you could get up to in their town.

Once you get involved with any local games, be sure to make the effort to get a conversation going. I’ll always remember a guy in Germany who seemed really pleasant, and asked to join the Frisbee game I was having with three or four friends, but then he never said another word. We were having a fairly muddled English and German conversation anyway, but he just put his head down and threw the disc back whenever it reached him, then smiled and walked away when we said we had to get home. Perhaps it was his first effort to follow my tips!

Sport is the Great Equalizer

Depending on you how you approach things, sports could create all kinds of conflict; but if you take the right tactics, you can use the relaxed nature of sports to build a bridge to local cultures and local people. If you’ve had any experiences with creating connections using sports while you travel, I’d love to hear about them in the comments.