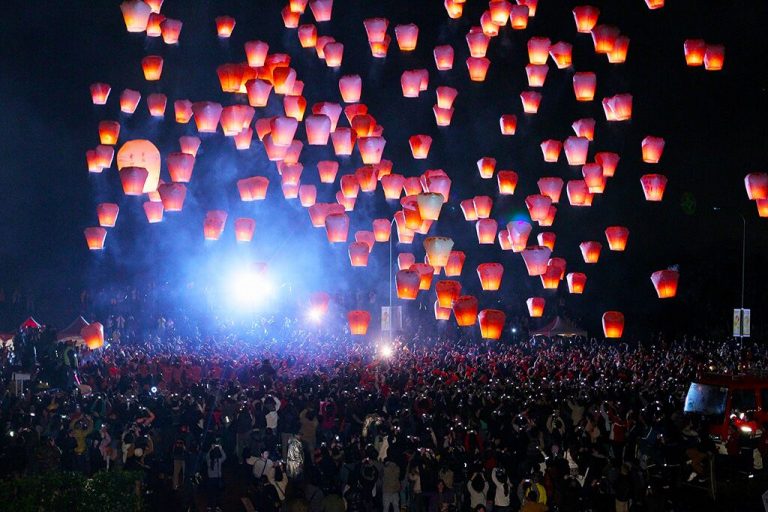 Taiwan Lantern Festival: The Best Reason to Visit Taiwan in 2018

If you’ve never visited Taiwan or are just looking for a reason to return to the beautiful Asian country, there’s never been a better time than 2018. This year, the annual Taiwan Lantern Festival is looking to be the country’s biggest and best (and most tech-inspired) ever. Here’s everything you need to know to plan your trip …

What Is the Taiwan Lantern Festival?

The Taiwan Lantern Festival (aka ‘Yuan Xiao Jie’) is among Taiwan’s largest annual celebrations. It’s designed to ring in the first full moon of the New Year, and the closing of the Chinese New Year.

How Is the Taiwan Lantern Festival Celebrated?

Local Taiwanese traditionally celebrate by gathering for large family dinners as it’s a special and sacred time of year. There’s usually lots of yuanxiao (a delicious rice dumpling), solving of the riddles printed on the lanterns, and, of course, carrying and hoisting the lanterns themselves.

The Taiwan Lantern Festival is replete with creative displays, light shows, and thousands of unique, beautiful, and specially designed lanterns in all colors, shapes, and sizes. Most of the lanterns play off the theme for the New Year, based on the zodiac animals of the Chinese calendar.

Where is the Taiwan Lantern Festival Celebrated?

The festival is celebrated in a variety of ways with unique festivities throughout the country. The Pingxi Sky Lantern Festival happens each year in Pingxi of New Taipei City. The paper lanterns date back centuries — even millennia — in some Asian cultures. They were originally designed during the three kingdoms of Zhu Ke-Liang (also known as Kongming) so that his military could deliver internal communications between one another. They were — and are still — crafted with a bamboo frame and oiled rice paper. A tiny candle at the center is lit, and the paper lantern is sent skyward using the same basic principles of hot air balloon flight. Revelers typically celebrate by penning their personal wishes on each lantern before sending them up to the heavens. It is believed to be a way to communicate directly with the gods.

In Taitung, there’s the fascinating (and curious) ceremony of Bombing Lord Han Dan. This involves choosing a man to play the role of Master Han Dan. In his role as a god of wealth, the man dons a pair of red pants, protects his face with a bamboo fan, and is carried around on a chair by four revelers. He is then pelted with firecrackers as a way for celebrators to pray for prosperity in the new year, and also to keep the god warm (he evidently hates the cold).

There’s also the Yanshui Beehive Rocket Festival, and several other festivals and celebrations at different Taiwan cities every year.

When Is the Taiwan Lantern Festival?

The festival is celebrated on the 15th day of the first lunar month each year. For 2018, the Taiwan Lantern Festival will be held March 2-11, and will be the first-ever tech-inspired festival.

For travel information and to start planning your trip, visit the official festival website. If you’re ready to book now, check out these great Taiwan travel deals.

Brought to you by the Taiwan Tourism Bureau.